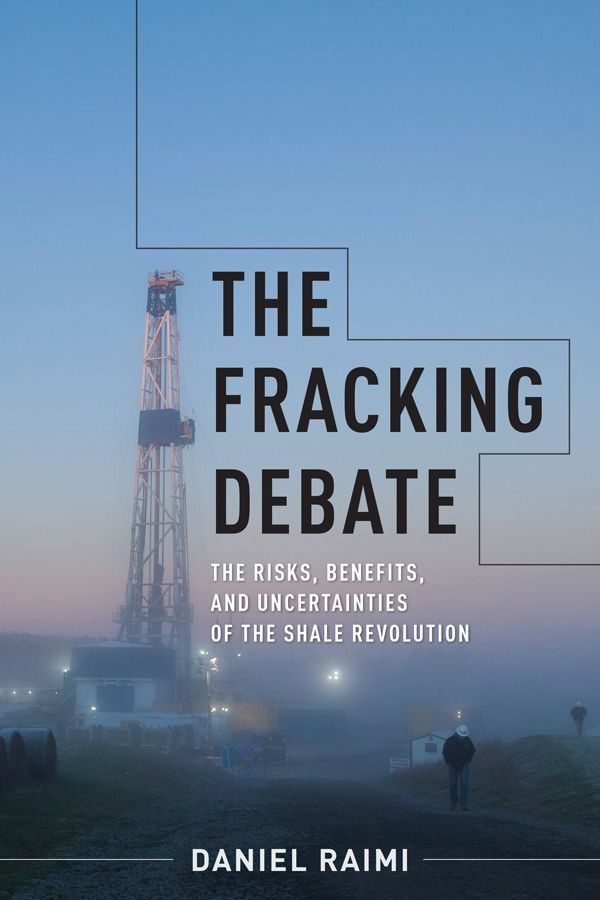 The Fracking Debate
The Risks, Benefits, and Uncertainties of the Shale Revolution
Daniel Raimi
Kindle Hardcover Paperback
This book review appeared in the Summer 2020 issue of The Independent Review.

The fracking debate is often framed around two themes: horror stories about the danger of fracking and stories of the glories of the American energy renaissance. Daniel Raimi’s goal in The Fracking Debate is to move beyond these polarized arguments by presenting “a full view of shale development in the United States, drawing both from the groundlevel experiences I’ve had and from the academic literature that continues to develop” (p. 6). Presenting the full view of fracking depends on accepting three key facts: first, the shale revolution has created benefits; second, the shale revolution has caused damage and imposed costs; and, finally, there are still a number of important uncertainties. Raimi’s impressive work certainly accomplishes its goal of providing a balanced, nuanced, and thoughtful analysis of the consequences of the shale revolution.

Chapter 1 addresses one of the key questions of fracking: With all that we do not know about fracking, why take the risk? This question raises the specter of the precautionary principle—the notion that until all risks are fully understood, it’s best to wait. In response, Raimi notes, “If the precautionary principle is the lodestar by which we navigate risks and rewards, it quickly becomes difficult to justify using any number of new technologies” (p. 7). Addressing this issue early on sets the stage for the thoughtful analysis that follows.

Chapter 2 presents an overview of the shale boom that gives the unmistakable feeling that we have seen these types of booms (and busts) earlier and will see them again. The narrative recognizes the role of entrepreneurs such as George Mitchell, the founder of Mitchell Energy, in developing techniques to frack shale gas. It also emphasizes an important point of confusion: “fracking” is only one aspect of the oil and gas industry. In addition, some problems—spills, leaks—do not require that we ban fracking but rather that we improve regulation.

Chapters 3, 4, and 5 address the costs of fracking: Does fracking contaminate water? Will fracking make me sick? Does fracking cause earthquakes? Anyone interested in the state of research on the costs of fracking will find these chapters indispensable. Raimi provides a masterful review of what economists, scientists, and engineers know about the harmful external consequences of fracking. What is especially compelling is that the book considers what the best available research finds and explains how research has often been misapplied both by those seeking to boost fracking and by those antifracking groups promoting a ban. These chapters address the challenges of assessing a causal relationship between fracking and harms, but, unlike many pro- or antifracking groups, Raimi uses these challenges to call for additional research—an eminently reasonable proposition. Anecdotes from the field give these accounts a human element often lost in reading the academic research on fracking.

Chapter 6 and 7 address regulation of fracking and fracking’s impact on climate change, respectively. The chapters are remarkably balanced. One of the key themes regarding regulation is that there has been substantial regulation of shale gas at the state level and that there probably ought to be more of a role for the Environmental Protection Agency in regulating air pollution caused by fracking. The author’s conclusion seems reasonable: “Ultimately, the choice of which level of government should take the lead in regulating oil and gas development comes down to a matter of trust in different levels of government” (p. 105). The analysis of climate change makes clear that fracking benefits the global environment by displacing coal but also recognizes that renewable energies deserve some credit as well. Raimi’s conclusions regarding climate change will not satisfy everyone but seem for the most part correct: fracking is neither a hero nor a villain in the climate-change story.

The rest of the book continues to provide insight into questions people might have about the shale boom. Chapter 8 considers whether fracking is good for the economy. Most evidence shows it is, but estimating impacts in the long run requires more time and data. Chapters 9 and 10 consider the international aspects of fracking, including the question of America’s energy independence (fracking makes us more independent, and that’s good) and how the rest of the world is doing with fracking (it’s falling behind).

The two final chapters consider beliefs more explicitly. Traveling through small towns and rural communities, Raimi met hundreds of people, which led him to the following perception: “On the whole, the positive tends to outweigh the negative, but the stories of the people living through the booms and busts are rarely simple” (p. 205). The book concludes with a request to listen to the other side of debates and to wrestle with thorny and complex trade-offs for which there are no easy answers.

The book’s greatest strength is its ability to see the big picture of the shale boom. This is especially refreshing when one considers the academic literature’s usual focus on pinpointing the external costs of fracking. Hundreds of excellent papers show how fracking might generate some costs, but such costs are inherent in economic development. The book’s focus instead on costs, benefits, and uncertainties is certainly correct.

The accounting for uncertainties may not convince all readers. Anyone who is deeply committed to the precautionary principle will likely respond that it makes more sense to prevent fracking until we know more about its benefits and costs. Others will contend that regardless of the benefits, some of the costs are simply not acceptable. For example, any link between health and fracking may be unacceptable. But this disagreement is not a weakness of the book. Raimi offers insight for those who are willing to discuss the benefits and costs. His analysis is therefore much more practical than debates about the precautionary principle, which in the United States has generally not swayed public policy, as evidenced by the massive increase in shale production. This book delivers what policy makers and citizens need to know given the reality of the shale boom (and possible bust).

There are a few things the book doesn’t do, including putting a number on the net benefits from fracking, though there are economic studies that do so (see, for instance, Catherine Hausman and Ryan Kellogg, Welfare and Distributional Implications of Shale Gas, National Bureau of Economic Research [NBER] Working Paper no. 21115 [Cambridge, Mass.: NBER, 2015]). Raimi also views trust in government as the most important reason to decide on which level of governance is most appropriate. Yet as Paul Dragos Aligica, Peter J. Boettke, and Vlad Tarko discuss in Public Governance and the Classical-Liberal Perspective: Political Economics Foundations (New York: Oxford University Press, 2019), there is also an epistemic reason to choose polycentric governance, which means taking advantage of local knowledge and expertise, as well as to encourage policy experimentation. Nor does Raimi’s account explicitly consider the institutional foundations of the shale boom, such as how property rights and polycentric governance enabled the shale boom or how these institutions explain why the United States has left much of the world behind in shale production. Nonetheless, even if the book has limitations in exploring why we see the shale boom, it does an exceptional job explaining what has come of that boom.

A case can also be made that The Fracking Debate does not go far enough in clarifying that by most economic standards the benefits of fracking would appear to outweigh its costs. As Timothy Fitzgerald shows, evidence of costs due to fracking—and not the result of other impacts associated with development—is elusive, and the easily observable benefits in terms of increased reserves, higher production, and lower energy prices appear to exceed the costs (“Frackonomics: Some Economics of Hydraulic Fracturing,” Case Western Law Review 63, no. 4 [2013]: 1337–62). Indeed, a colleague and I find that from an economic perspective there should not be so much debate: fracking generates massive benefits in excess of its costs (see Ilia Murtazashvili and Ennio E. Piano, “More Boon Than Bane: How the U.S. Reaped the Rewards and Avoided the Costs of the Shale Boom,” The Independent Review 24, no. 2 [Fall 2019]: 249–72). Yet one cannot fault the book for providing the relevant information and allowing interested readers to draw their own conclusions regarding whether the benefits of fracking exceed its costs.

The Fracking Debate accomplishes what it sets out to do. It provides a wealth of insight into the most significant aspects of fracking. It is a useful manual for local politicians and policy makers seeking to address questions at a town hall. Some of my colleagues have remarked on how useful it is for teaching about these issues, and I, too, have found it very useful in this regard. Anyone interested in researching fracking can use this book to see the lay of the land as far as existing studies. And its overarching ambition—to use fieldwork and academic research to overcome the polarization of American politics—is a worthy example for scholars who want to increase the political and social significance and impact of their research.