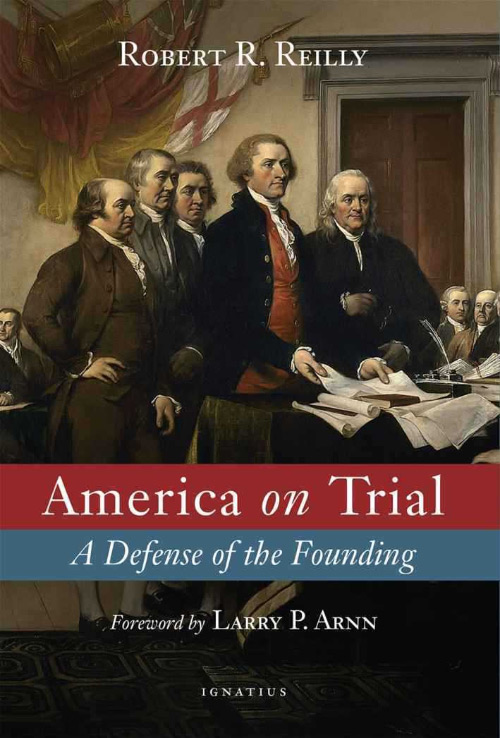 America on Trial
A Defense of the Founding
Robert R. Reilly
Kindle Hardcover
This book review is a web exclusive for the Spring 2021 issue of The Independent Review.

Are the Founding Fathers to blame for modern America’s descent into radical individual autonomy? Is retired Justice Anthony Kennedy’s conception of liberty—“the right to define one’s own concept of existence, of meaning, of the universe, and of the mystery of human life” (Planned Parenthood of Southeastern Pa. v. Casey, 505 U.S. 833, 851 (1992)—the progeny of Thomas Jefferson, John Adams, and Benjamin Franklin? No, says Robert R. Reilly in America on Trial: A Defense of the Founding.

Reilly contends that the United States, as evidenced by the opening lines of the Declaration of Independence, is founded upon principles of natural law—the Deity’s own internal reason. True law, being the product of reason and not the will, is the antipode of Justice Kennedy’s musings about radical individualism. One cannot understand the United States, Reilly instructs, without appreciating the medieval, Catholic natural law tradition that was recovered in Philadelphia in July 1776.

The American Founding, Reilly avers, is a legacy of the three cultures: Athens, Jerusalem, and Rome. Athens bequeathed “the idea that mind can know things, as distinct from merely having opinions about them, because reality exists objectively” (p. 26). “[T]hanks to Greek philosophy, Reilly asserts, “reason became normative” (p. 30). Jerusalem contributed monotheism and the creation of man in God’s image. As an image bearer, man has intrinsic value and thus there are “limits upon the political power exercised over him” (p. 25). Rome (i.e., Christianity) “achieved the marriage of Athens and Jerusalem” by universalizing monotheism and reason (p. 44). Man accepted a new covenant by which he “could transform his sufferings into something endurable and ultimately salvific” (p. 46).

In the Middle Ages, Reilly argues, the three cultures melded together to push the West towards liberty, constitutionalism, and limited government. Key to this was rediscovery in 1080-1100 of Justinian’s Digest, which contained excerpts from the writing of greatest Roman jurists in the times before the barbarian invasions. The unparalleled analytical reasoning on display in the Digest coupled with the Institutes (Justinian’s legal textbook) and the Codex (laws and interpretation of laws from 529 to 565) led to a renaissance of law in both the church and state. Canon law (church law) and civil law (secular law) both claimed to be the law common to Christendom but tensions inevitably arose.

Accursius, a great organizer of the scholastics’ commentary on Justinian’s Corpus Juris Civilis, set forth a division for the pope and the Holy Roman Emperor by declaring that neither the pope in secular matters nor the emperor in spiritual matters had any authority. Hence, Roman law supported separate entities exercising power—confined to certain spheres—over a single people. But the people, under Roman law, were not left to the mercy of their rulers. Roman property law supported the idea of popular sovereignty and the right to resist tyranny and reconstitute a commonwealth.

Throughout the Middle Ages the scholastics studied and attempted to harmonize Roman law, the Church Fathers, and the philosophers of antiquity. Among the schoolmen, an emphasis on natural law developed whereby the “‘good’ for a thing are those things or actions that assist it in reaching perfection” (p. 28). The first precept of natural law, according to St. Thomas Aquinas, is to do good and eschew evil. The concept of good and evil, Aquinas teaches, comes from the rational nature (or essence) of human beings. Moreover, man has a natural inclination to do good according to the nature of his reason. When man acts by his senses rather than his reason he falls into sin and away from the natural light of reason.

Because of the natural law philosophers, Reilly paints a picture of rational progress in the art of government. But in this medieval paradise a serpent entered and altered the trajectory from liberty to absolutism. The cunning serpent, Reilly explains, is Martin Luther. Only years later would the Americans reinvigorate medieval constitutionalism and recover what was lost in the Protestant Reformation.

Luther, Reilly instructs, fell under the spell of the nominalism taught by William of Ockham. Ockham denied that universal concepts have reality apart from the individual things. In other words, he denied the idea of essences. Reilly explains the significance: “Contrary to what Aquinas taught about the divine ideas, God does not harbor a divine idea of what a dog is and then make dogs from it” (p. 112). Without essences, the creation of “each dog is accordingly an individual act of God’s will unrelated to any other act” (p. 112). Nominalism led to voluntarism: that God is the first cause of all things and he is unbound by anything, including reason.

Luther’s emphasis on the sovereignty of God rather than His inner reason, according to Reilly, “laid basis for unrestricted state sovereignty, which would soon claim the whole man for its own” (p. 127). Similarly, Luther’s teaching on original sin’s radical corruption of man, including his reason, challenged the Catholic Church’s teaching that grace cleanses and perfects nature rather than artificially covering it. To put the matter explicitly in theological terms, the Reformers denied that God’s grace is infused into regenerate man making him truly righteous, but instead taught that grace cloaked man with Christ’s righteousness, which is an alien righteousness. Moreover, the Reformers averred that God acts monergistically in changing man’s corrupt heart so he will believe in Christ. If sinful man is dependent upon God to change man’s inclinations and draw him to Christ, Reilly believes this undermines salvation as a “rational act of the will” which in turn “had a negative impact on constitutional principles” and supported absolutism (p. 144). “Freedom, obviously, is a hollow idea if free will and reason do not exist” (p. 273).

The American Founders, Reilly asserts, although mostly Protestants, reached back to the medieval, Catholic natural law tradition and rejected the political consequences of Luther’s thought found in the likes of Thomas Hobbes and his praise of a Leviathan government. To prove his point, Reilly compares passages from the Declaration of Independence with passages from natural law thinkers such as Robert Bellarmine and Francisco Suárez.

All of this makes for interesting reading. One thing Reilly never adequately explains, however, is why absolutism thrived in Catholic countries such as France whereas Protestant countries such as the Netherlands and England had better success with limited government. Without much analysis, he adjures that once churches became “national” in Protestant countries, Catholic princes simply followed suit and thus weakened the papacy.

One glaring omission is any mention of Calvinism and its possible influence on the American experiment. As Douglas F. Kelly (The Emergence of Liberty in the Modern World. Phillipsburg: P&RP Co., 1992, p. 17) has pointed out: “Governmental principles for consent of the governed, and separation and balance of powers are all logical consequences of a most serious and Calvinian view of the biblical doctrine of the fall of man.” Indeed, Calvinists in France (the Huguenots) and in Scotland developed the idea of the people’s right to resist a tyrant. In England, the Puritans put Charles I on trial and executed him for attempting to establish an unlimited and tyrannical power. It was during the English Civil War that John Lilburne and the Levellers put forth the radical ideas about popular sovereignty and urged adoption of the Agreement of the People as a written English constitution. Of course, many English Puritans settled in North America and had a significant influence on colonial thought.

During the Revolutionary War, King George III and his supporters for good reason described the Spirit of 1776 as a “Presbyterian Rebellion.” They sensed that the same principles animated the colonists that led to the execution of Charles I and later the Glorious Revolution when William and Mary were invited to assume the English throne.

In matters of theology, Reilly ignores that Luther’s doctrine of grace was not his invention but a mere restatement of the teachings of Augustine of Hippo. Augustine taught that with the Fall, man became unable to not sin because corruption infected all facets of life, including the mind. Absent the sovereign and gracious act of God to change a sinner’s inclinations to things of righteousness, man will always choose evil over good. The will of unregenerate man, Augustine taught, always prefers the ways of darkness to the ways of light.

Undoubtedly, the natural law tradition did influence some of the Founders. But so did ancient proscriptive rights, chartered rights, and immemorial custom. Reilly works hard to convince the reader that the Protestant Founders were really closet Jesuit disciples of Robert Cardinal Bellarmine, but he ultimately falls short because this is a bridge too far. For all the book’s positives, Reilly’s efforts to champion the political thought of Leo Strauss and Harry Jaffa betrays what would have been an opportunity to examine the influence on the Founders from multiple schools of thought. Instead, Reilly attempts to make them proto-Straussians for whom the Declaration of Independence is the true law of America rather than positive law found in federal and state constitutions and statutory law.