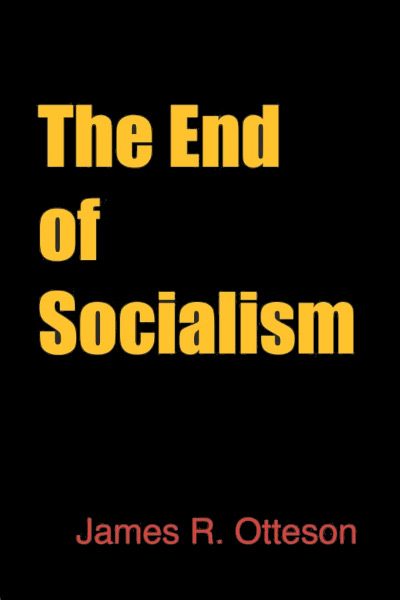 The End of Socialism
By James R. Otteson
Kindle Hardcover Paperback
This book review appeared in the Winter 2015/16 issue of The Independent Review.

James Otteson pronounces the “end of socialism,” but do we really need another obituary for that superannuated theory? Idiosyncratic Vermont senators aside, those who self-identify as socialists are a vanishing breed. Not even the economic misadventures surrounding 2008 led thoughtful people to conclude that any serious alternative to market-based production is available.

Forgetting the music of the 1960s would be tragic; forgetting its ideologies, not so much.

One venue in which socialism continues to thrive, however, is academic political theory and philosophy programs. There it resurfaces as both a historical predecessor and a respected contemporary critic of welfare-state liberalism. In the latter mode, the text that outshines all others, enjoying a favored spot in the backpacks of college freshmen across America, is G. A. Cohen’s Why Not Socialism? (Princeton, N.J.: Princeton University Press, 2009). To be sure, the presence of that volume doesn’t unduly burden them. The microbook boasts the dimensions of my Samsung Galaxy 5 cell phone and can be read front to back easily in less than an hour. Nor is it weighty in the other sense by which academic tomes are customarily measured; its theoretic heft is minimal. The remarkable popularity of Why Not Socialism? is attributable to the story it tells in the opening pages. Imagine, directs Cohen, going on a camping trip with a bunch of other people who bring along different talents, interests, and implements. The goal is recreation, but there also are chores to be done—berrying, fishing, cooking, and cleaning up. The campers divide their labor and their play in keeping with their individual tastes, but they do not affirm their own exclusive property rights, nor do they require payment for services rendered to others. Rather, the trip operates in the absence of hierarchy and flourishing by some at the expense of others. People are not identical, but they are equal; they may or may not be friends (in the pre-Facebook meaning of the term), but they are fraternal in their interactions. Cohen asks: Would you prefer a trip organized along these lines or one in which campers insist on a quid for every quo? If the former, you have acknowledged the attraction of a socialist order. This isn’t, to be sure, your grandfather’s socialism (especially if your grandfather was a doctrinaire Stalinist or Trotskyite), but it is the kinder, gentler socialism that a majority of students profess to find more agreeable than capitalism. (See the results of a recent Pew Research Center poll reported in Alexander Eichler, “Young People More Likely to Favor Socialism Than Capitalism: Pew,” Huffington Post, December 29, 2011. How many of these young people have read Why Not Socialism? is not stated.)

It is against this target that Otteson directs his fire. Viewed from one perspective, the two books seem to be a complete mismatch. The End of Socialism is erudite, exceedingly well informed, and some 800 percent more massive than the forerunner that it far exceeds in argumentative power. What it does not do, however, is tell a compellingly folksy story, and thus it is unlikely to drive Why Not Socialism? from its curricular perch. (As Ayn Rand knew better than anyone, it is not only from the left that emotions can be engaged and ardor cultivated.) Comparative mythology is not Otteson’s preferred genre, but he manages to construct an appealing alternative by channeling the thought of Adam Smith.

This route isn’t exactly obvious. Smith precedes Karl Marx by approximately a century, and although he is well positioned to probe the inadequacies of mercantilism or British policy against the fractious thirteen colonies, the same cannot be said about his expertise concerning theories that advocate public ownership of the means of production. Would it not make more sense to invoke an economist of a later generation to help man the barricades? The obvious candidate is Friedrich Hayek, but here he appears mostly as a bit player in Otteson’s development of the argument that no individual or bureaucracy can possess knowledge sufficient to order society. Smith offers a prequel to Ludwig von Mises and Hayek’s dismissal of the feasibility of socialist calculation when he warns in Theory of Moral Sentiments (1759) of the “man of system” who believes he can arrange human beings like pieces on a chessboard. The man of system thereby neglects to take into account that people, unlike chess pieces, have their own principles of motion that confound the planner’s stratagems. This notion can be understood as an epistemological observation, but it also has moral bite: to treat people as if they are the instruments of one’s own designs is to fail to afford them the respect that is their due. Even were a grand project for social ordering to be brought to successful fruition, rarely a likely result, it would bear the onus of treating people manipulatively. This isn’t a definitive critique; traffic lights also “manipulate” people by checking their own personal principles of motion to impose an order that would otherwise not be achieved. But because motorists can reflectively endorse this order as suiting their own ends, traffic controls are not illiberal. What is called for in this and other cases is a balancing of (sometimes competing) ideals.

Because Smith held, among numerous other ranks and accomplishments, the position of Glasgow University professor of moral philosophy, he is especially suitable to be conscripted by Otteson as companion-in-arms for combating the late Chichele Professor of Social and Political Theory of All Souls College, Oxford. Cohen’s socialist vision is not dismissed out of hand, but against it are arrayed illustrations of lives enhanced through market interaction. These depictions are not presented as exclusivist; many important aspects of life proceed outside a capitalist framework, including camping trips. Because that is so, Cohen’s opening story is at best of modest probative value in making the case for socialism. He would need in addition to mount a plausible case for the proposition that the camping trip serves usefully as a model for other important realms of activity, especially production and allocation of goods and services. It would be misleading to say that Cohen falls short in this regard; in truth, he barely makes an attempt beyond plaintively expressing the wish that the great society could be more like the camping trip. Much of Otteson’s effort in The End of Socialism is directed toward demonstrating that small-group socialism does not scale well to larger associations, let alone to entire societies. Without wanting to come across as brusquely dismissive, I hardly can avoid characterizing this as shooting fish in a barrel. It is also otiose. An abundance of pieces in the scholarly literature have painstakingly dissected and found wanting Cohen’s analogy. That cascade of refutations has not, however, diminished occurrences of Why Not Socialism? on college reading lists; I’m confident that a number of instructors are keen on employing it as a course text precisely because they find that students take some measure of pride in their own ability to detect gaps and flaws in Cohen’s presentation.

I conjecture that most readers of The Independent Review would find Otteson’s critique well accomplished but also superfluous; it has been heard before. The lucid prose should, however, earn it a place in many courses, especially those that also feature Why Not Socialism? A further bonus is that The End of Socialism will painlessly introduce students (and no small number of their professors) to one of the most profound social theorists who ever lived—and no, I don’t mean Karl Marx. Disciplinary canons are a wayward lot, and for reasons that cannot be plumbed here, Adam Smith is mostly absent from syllabi in both philosophy and political theory courses. He is, to be sure, an acclaimed resident in the economics pantheon, but because economics is a “science,” its practitioners rarely read beyond the current decade’s literature. My own philosophical training entirely omitted any reference to Smith except to note that the author of Wealth of Nations (1776) was David Hume’s best friend. Admittedly, my education was more patchy than most, but in this respect it is representative. In recent years, that neglect has been somewhat turned around. In part, this increased attention to Smith is due to the wonderfully handsome and inexpensive Liberty Press edition of the Smith corpus, but it is also due to the fact that Smith’s ideas are too good even for the conventions of academia to bury permanently.

I am old-fashioned enough to believe that it is almost always preferable to read primary rather than secondary sources—I admit to making exceptions in my own case for Hegel and Heidegger—but it surely is to the good if readers of Otteson’s book thereby pick up some Smith en passant. But even those happy few college courses that do include Smith selections stand in need of augmentation. Smith produced two very long books that are, despite the surmises of an earlier generation of scholars, complementary. To know only one is not to know it adequately. Otteson marshals crucial themes from both Wealth of Nations and Theory of Moral Sentiments in a manner that will be useful even to those who lack interest in the socialism debate. It is therefore unfortunate that the only way Otteson’s gem of a book is likely to find its way to readers is by piggybacking on Cohen’s less-impressive work. (Good news for teachers and students but less good for Otteson is that almost simultaneous with the release of his book comes the publication of Jason Brennan’s Why Not Capitalism? [New York: Routledge, 2014]. As will surprise approximately no one, that book also takes Why Not Socialism? as its foil. The two critiques are comparable with regard to accuracy and pedagogical suitability. Brennan’s has the great virtue of brevity, almost matching Cohen’s. Otteson’s has the great virtue of co-opting Smith. Isn’t choice wonderful!)

James Otteson is a distinguished Smith scholar, and I am not, so I hesitate to take issue with the interpretations he proffers. Nonetheless, and with due trepidation, I believe that he attributes more austere a liberalism to Smith than the texts warrant. In particular, I think there is more latitude in Smith’s view of permissible public-goods provision than Otteson acknowledges. In addition, because in Smith’s universe people are hardwired regularly to act with less than full rationality, he leaves scope for those in authority properly to structure choice situations for paternalistic ends. It is only a modest stretch to see him as the grandfather of contemporary “Nudge” theory. Otteson may deliberately be playing down these aspects because they would distract from focusing on the argument against socialism. Still, if he can have his anachronism, perhaps he might allow me mine.

Loren E. Lomasky
University of Virginia
FreedomPhilosophy and ReligionSocialism, Communism, and Collectivism
Subscribe Buy This Issue Get the App