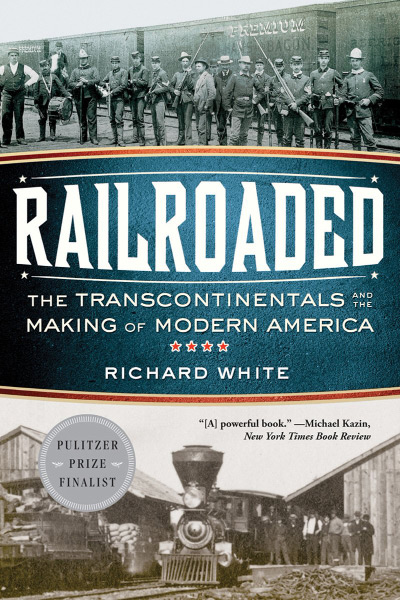 Railroaded
The Transcontinentals and the Making of Modern America
Richard White
Kindle Hardcover Paperback Audiobook Audio CD
This book review appeared in the Spring 2013 issue of The Independent Review.

Network industries are especially prone to market and government failures because they involve large, durable, and fixed investments across space. History is useful in trying to understand how network industries evolve and the role of policies and institutions in their development. One needs to see them in a long-run perspective, which is exactly what Richard White does in his provocative and well-researched book on the American transcontinental railroads.

It is difficult to overstate the centrality of railroads to American history, especially in the territories west of the Mississippi River. In economic terms, transcontinental railroads are seen as an engine of growth, integrating eastern and western markets and thereby opening the possibility of settlement. Frederick Jackson Turner’s famous safety-value argument posits that the opening of the frontier kept American wages relatively high because it prevented diminishing returns to labor. In this perspective, railroads are seen as a great achievement. This story has a dark side, however. Private companies built the transcontinental railroads, but they received significant government aid. The federal government most notably gave land grants and lowinterest loans. The official rationale for the subsides was that railroads across the American West would be built too slowly or not at all unless investors received extra inducements. Government was giving a helping hand to a strategic industry. As it turned out, transcontinental railroads were not a financial success in the short term. By the 1890s, many could not meet their interest obligations and went into receivership. They also aroused tremendous complaints from farmers and shippers. Discrimination in freight rates across space and across traffic types led to calls for regulation and eventually led to the founding of the Interstate Commerce Commission.

In Railroaded, Richard White gives a comprehensive account of the economic, social, and political aspects of transcontinental railroads. The book is based on a deep reading of the sources and is a must read for anyone interested in transportation and the development of the American economy. White is particularly keen on pointing out the transcontinental railroads’ failings in order to counter many studies that view them in a favorable light. He makes several main points that are worth exploring in detail.

First, he argues that tremendous corruption was involved in building and operating the transcontinental railroads. The promoters of the Central Pacific, Southern Pacific, and Union Pacific railroads were more interested in the profits from constructing railroads than from operating railroads efficiently. Leyland Stanford and Collis Huntington used various schemes to line their pockets, such as forming a construction company that they controlled and from which they profited exclusively in building the railroads. As long as the federal government did not call in the loans and investors were still willing to provide capital, promoting and building transcontinental railroads provided a path to immense fortunes. White gives the details of how fortunes were amassed, including countless examples of bribes to politicians and double-dealing with distant investors. For example, he reports evidence that the Central Pacific’s legal expenses were more than three times its total tax payments in the 1870s (p. 130). Influencing politicians apparently cost more than legitimate payments to government. There is also much evidence of the antagonisms between the great railroad barons. For example, Huntington hated Jay Gould, which is not surprising because he operated a rival railroad, but more surprising is that Huntington also hated Stanford, with whom he controlled the Central Pacific. As White points out, it is impossible to understand the transcontinental railroads’ history without knowing their promoters’ character. One is left wondering what the West would have been like if “gentleman” capitalists instead had promoted transcontinental railways.

White’s second main point is that the transcontinental railroads’ social costs may have exceeded their social benefits, indicating that these railroads should not have been built or at least that they should have been operated differently (p. 460). The argument is well articulated, but in the end the evidence is not as conclusive as the text might suggest. There is some confusion about the definition of social costs. Railroads generated private gains along with private losses by changing trade patterns. For example, a farmer in a favorable location near the market might lose income when railroads expanded to the frontier. Such income losses, however, are more than offset by the gains to urban consumers or farmers near the frontier. In another example, land grants to railroads are not a social cost. They are a form of redistribution. At various points, White seems to equate subsidies and private losses with social costs. This issue aside, White makes a valuable point that many people lost income because of the transcontinental railroads, which also contributed to environmental damage through the spread of pestilence and the near extinction of species such as the buffalo (p. 462). Historians and economists need to do a better job of estimating the distributional effects and the social costs of large infrastructure projects such as railroads.

White’s most powerful critique concerns the potential misallocation of capital. Transcontinental railroads were expensive to build, but their financial returns were disappointing for several reasons. Investors were deceived about the potential for traffic, and railway promoters turned out to be poor railway managers. The most egregious examples are the construction of multiple, parallel transcontinental railroads. Kansas, Colorado, and North Dakota stand out as prime examples of overbuilding because they had very dense networks despite their low populations. White bolsters his argument with evidence that the U.S. railroad system had higher operating costs compared to the systems in other countries from the 1880s to the early 1890s (see, for example, Dan Bogart “A Global Perspective on Railway Inefficiency and the Rise of State Ownership, 1880–1912,” Explorations in Economic History 47 [April 2010]: 158–78). In other words, a noticeable run-up in costs occurred when many transcontinental railroads began operations. Perhaps the most direct test of capital misallocation would be to compare the private financial returns of transcontinental railroads with returns on other investments. Even though the transcontinental railroads eventually went bankrupt, it is not immediately clear that capital could have been invested elsewhere at a greater private financial gain. In the late nineteenth century, rates of return on capital were falling, especially in Europe. Brian Mitchell, David Chambers, and Nick Crafts have shown that, based on rates of return, British investors were wise to invest in foreign railroad securities rather than in British railway securities (“How Good Was the Profitability of British Railways, 1870–1912?” Economic History Review 64 [2011]: 798–831). To establish more evidence for misallocation, one would need to show that a portfolio of U.S. transcontinental railroad securities had a lower rate of return than a portfolio of other utilities or manufacturing stocks.

White also questions whether shippers and farmers benefited from transcontinental railroads in terms of lower freight rates. The traditional view is that railroads dramatically lowered freight rates. For example, Albert Fishlow reports that average freight rates per ton mile for the U.S. railroad sector in 1890 were 42 percent of their level in 1870 (“Productivity and Technological Change in the Railroad Sector, 1840–1910,” in Output, Employment, and Productivity in the United States after 1800, edited by Dorothy Brady [New York: Columbia University Press, 1966], p. 583). White reports a similar figure given for one transcontinental (p. 151). Such trends have formed the basis for arguments that railroads generated large social benefits. White questions such trends on a number of levels, however (pp. 146–52). First, he notes that freight rates differed substantially by distance and type of traffic. Second, he points out that the lower average rates per ton mile may reflect a change in traffic composition, with traffic that paid lower rates increasing its share of total traffic. Although changes in composition might be the explanation, no evidence is given on this front. White more generally seems to take at face value the views of the Grangers and Anti-monopolists that railroad freight rates were too discriminatory or unstable (pp. 162–69). These people clearly had an interest in making such an argument because they wanted governments to impose lower freight rates everywhere. To settle the matter, future research needs to reconstruct the cost of shipping goods by railroads at a local level (that is, between specific cities) and to consider how transport costs might have differed without railroads or under different pricing strategies. On a related point, White gives a number of intriguing examples of collusion between railroads and steamship companies. For example, evidence shows that railroads would buy steamship capacity in advance in order to restrict the market and encourage collusion (p. 166). Whether such schemes were stable speaks to the larger issue of how railroads affected the economy.

Another issue concerns the benefits of western settlement. White admits that development of the American West would have been delayed without the transcontinental railroads, but he argues that much waste would have been avoided (p. 461). One example is the large number of business failures. Although this point is well taken, one needs to consider other counterfactuals. For example, Fredrick Jackson Turner famously argued that wages would have fallen in the East but for the frontier’s settlement. Although transcontinental railroads may not have increased wages in the West, they likely kept them from falling in the East.

What are the broader lessons from this study? One is that regulation matters. The transcontinental railroads were built in an environment with limited regulatory capacity. Large parts of the West were either newly formed states or still territories in the 1870s and 1880s. The judiciary and political systems were not as mature as in the East. Greater longevity and experience in the bureaucracy is often associated with better governance, as White notes for European countries such as Great Britain, Germany, and France (p. 232). What seems to have been missing in the American West were good institutions that could limit monopoly power and rationalize railroad construction. The unbridled individualism and creative destruction that arguably made (and still make) American manufacturing industries innovative and productive were probably not a good model for success in railroads and other large-network industries. Finally, it should be noted that U.S. railroads ought not be viewed as a general failure. If one compares estimates of the total factor productivity or efficiency of railway systems across countries in 1910, the United States ranks at or near the top (Bogart, “A Global Perspective on Railway Inefficiency”). Perhaps the management and regulation of U.S. railroads improved in the early 1900s. If so, this improvement provides evidence that the American economy and some of its important institutions adapted when faced with a crisis.