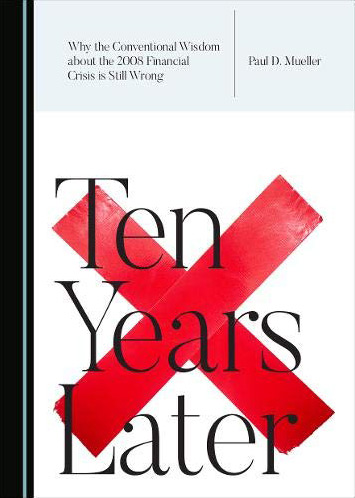 Why the Conventional Wisdom about the 2008 Financial Crisis Is Still Wrong: Ten Years Later
Paul D. Mueller
Paperback
This book review appeared in the Summer 2020 issue of The Independent Review.

The idea of writing a retrospective account of the financial crisis ten years out is a good one, and Paul Mueller’s book provides a nice overview of the economic and political factors that contributed to the crisis. Ten Years Later: Why the Conventional Wisdom about the 2008 Financial Crisis Is Still Wrong has a bit of a public-choice flavor in that he stresses how various bank and mortgage regulations tended to amplify the crisis—making it worse than it would otherwise have been. That perspective is perhaps naturally absent from the macroeconomic perspective that dominates writing and economic research in this area, in which the details of policies are essentially without interest and the focus tends to be on variables of interest to macroeconomists as explanatory factors. For the most part, most macroeconomists regard their models to be correct, even though the models completely missed—that is, failed to forecast—the financial crisis that emerged in 2007–8. As a macroeconomist might say with a shrug, “Surprises and shocks happen.” Carmen Reinhart and Kenneth Rogoff’s work on financial crises (This Time Is Different [Princeton, N.J.: Princeton University Press, 2011]) is a rare exception to this complacency typical of mainstream macroeconomists, but its insistence that excessive private and public debt can lead to crises is not mentioned in Mueller’s book.

Ten Years Later is not really about macroeconomics except insofar as Mueller uses some macroeconomic basics in his overview of conventional or mainstream explanations for the financial crisis and its associated great recession. Rather, it is about a plethora of microeconomic factors—largely regulations of various kinds— that contributed to the crisis. In that respect, it is similar in spirit to a piece I wrote as the crisis was unfolding (“On the Political Economy of the Financial Crisis and Bailout of 2008–09,” Public Choice 140 [2009]: 287–317).

The book is organized in three parts: part 1 provides an overview of the factors that created the environment for the financial crisis; part 2 provides an overview of events and immediate responses to those events that occurred in 2007–8; part 3 reviews mainstream explanations for the crisis and for the slow recovery after the crisis was over, explores new territory, and directly challenges the conventional wisdom about the crisis.

Before publication, sections of the book were used in undergraduate course(s) taught at Kings College of New York. The book thus assumes some economics background and familiarity with news accounts of the Great Recession, but it does not assume that readers are familiar with the huge academic literature associated with it or with the regulatory environment faced by the financial industry. Sketching out these elements is the main task of the first half of the book.

For the most part, the book can be thought of as a critique of popular accounts of the crisis and Great Recession provided by the mass media and best-selling books on the causes and effects of the collapse of the mortgage-backed securities market in 2008. Most of the references are to such publications, which is consistent with the targeted audience of the book—lay readers rather than experts in bank regulation, public finance, or macroeconomics.

In the conclusion, Mueller argues that the crisis was “a perfect storm of misregulations creating massive distortions in the housing market and unexpected fragility in the financial system” (p. 170). The regulatory response, he fears, will do more of the same: “[A]dding thousands of new regulations is no guarantee that the problems have been addressed. In fact, these new regulations have likely laid the groundwork for another financial crisis” (p. 170). There are several reasons for his gloomy conclusion—chief among them are the bank- and financial-sector regulators’ failure to let poorly run companies disappear (e.g., be divided up and sold to more successful companies), the lack of transparency, and thus the arbitrariness of postcrisis bank- and financial-sector regulation.

Overall, the book is a useful antidote to the popular-press, best-seller, and selfserving accounts of those directly involved in the crisis. It provides a useful overview of the nature of and possible remedies to the financial crisis that emerged in the fall of 2008—during a national election cycle. Markets work pretty well and do so better when the rules that constrain them from bouts of irrational exuberance (or lack of due diligence) are clear and easy to enforce.

The extent to which clear, easy-to-enforce laws can be applied to today’s megabanks with their complex conditional financial securities and risk-management strategies is an open question, but it is clear that Mueller believes such rules to be possible and the best direction for future reform.