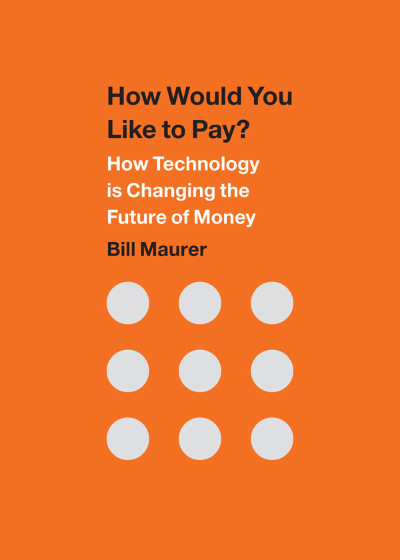 How Would You Like to Pay?
How Technology is Changing the Future of Money
By Bill Maurer
Kindle Hardcover Paperback
This book review is a web exclusive for the Spring 2016 issue of The Independent Review.

As an anthropologist, Bill Maurer has spent the past two decades researching the cultural and social dynamics of money. In his latest book, he manages to condense his life’s research into one gripping, bite-sized read that is accessible to a diverse range of readers from the artist and software programmer to the financial regulator or economist.

The key questions that Maurer addresses are fairly straightforward: what is money, and how has technology changed the way we use it and the meanings we ascribe to it? The questions might not be wholly original. But in today’s continually changing technological landscape, he argues that thinking about money in new ways is absolutely essential (p. 7).

Most of us are so immersed in monetary economies that it becomes easy to lose sight of just how radically the way we use and conceive of money has evolved over time and across continents. One of the best aspects of Maurer’s work, then, is the vivid imagery that he scatters throughout the book depicting the marvel of our wonderfully advanced money and payment ecology. Much of this landscape has been drastically altered in recent years by technological innovations in money. Yet as Maurer is always quick to point out, “Money is not just a technology. It is an extension of relationships, between ourselves and others, our pasts and futures, our world, and the worlds we can imagine” (p. 143). That is, money is fundamentally a social phenomena.

At times, Maurer succeeds in highlighting the critical factors that support our diverse “monetary repertoires.” In the introduction, for instance, he notes that we should not assume that successful mobile payment services like M-Pesa or crypto-currencies like Bitcoin are the inevitable next step in the evolution of money. To do so, he argues, would be to “...overlook the persistence of millennia-old traditions and institutions” that created the socio-political landscape that enabled these new technologies to arise (p. 6). As he aptly summarizes: “Those traditions and institutions matter.”

Unfortunately, the rest of Maurer’s analysis tends to downplay the fundamental role that these institutions (both formal and informal) play in setting the stage for technological revolutions in money. It is true, as Maurer (p. 37-49) extensively documents, that money was not created in a vacuum; it is a social convention. But what is most important—and what Maurer does not emphasize enough—is that successful monies and payment systems can only arise under “rules of the game” that protect property, contract, and the rule of law. (See, for instance, Lawrence H. White. The Theory of Monetary Institutions. Oxford: Wiley-Blackwell, 1999, pp. 1–18 and Steven Horwitz. “Do We Need a Distinct Monetary Constitution?” Journal of Economic Behavior and Organization 80 [2009]: 331–338).

Carl Menger (“On the Origins of Money.” Economic Journal 2 [1892]: 239–55) explained more than a century ago how sound money emerges not through the top-down design of benevolent kings but spontaneously through what Adam Smith called the “truck, barter, and exchange” activity between individuals throughout the market economy. Today, there are hundreds of examples of successful money and payments systems that have evolved in precisely this “bottom-up” fashion. Although more sophisticated technologies like Bitcoin and Apply Pay have received the lion’s share of the media attention, the star player in Maurer’s account of how technology is changing the future of money—particularly in the developing world—remains the “simple feature phone” (p. 9), as evidenced by the “mobile money revolution” currently sweeping across Sub-Saharan Africa (see, for instance, Simon Batchelor. M-banking: An African Financial Revolution? Copenhagen: International Books, 2009; and Jenny C. Aker and Isaac M. Mbiti. “Mobile Phones and Economics Development in Africa.” Journal of Economic Perspectives 24 [Summer 2010], 207–232)). The most successful case thus far has been M-Pesa in Kenya. Launched in April 2007 by the nation’s largest mobile provider, Safaricom, M-Pesa allows Kenyans to cheaply send money anywhere in the country via a simple SIM-card application on their mobile phones. By 2011, M-Pesa had processed more transactions within Kenya than Western Union had done globally (p. 21). Today, Kenya is the world leader in mobile money, boasting more active accounts (26 million) than adults in its population.

Numerous authors (including Maurer) have investigated the various socio-political reasons why the mobile money revolution has taken root in some countries and not others (see, for instance, Jake Kendall, Bill Maurer, Phillip Machoka, and Clara Veniard. “An Emerging Platform: From Money Transfer System to Mobile Money Ecosystem.” Innovations 6 [Fall 2011], 49–64). Maurer acknowledges (pp. 18–19) that one of the reasons that M-Pesa grew so rapidly was because it relied on existing behavior, existing infrastructure, and background technology—that is, it was fairly easy for Kenyans to adopt since most had cell phones that they used to send messages everyday. But this social emphasis only captures part of the picture.

The core reason why M-Pesa has succeeded where so many others have failed is because Kenya has fostered a far more fertile political-legal environment that promoted commercial activity and financial innovation. Realizing the enormous benefits that M-Pesa might confer to the unbanked poor, Kenyan regulators worked directly with Safaricom and microfinance agencies to foster an “enabling” regulatory environment that encouraged rather than stifled experimentation (see, for instance, David Porteous. The Enabling Environment for Mobile Banking in Africa. London, DFID, 2008; and Nick Hughes and Susie Lonie. “M-Pesa: Mobile money for the ‘Unbanked’ Turning Cell Phones into 24-hour Tellers in Kenya.” Innovations 2 [Winter/Spring 2007]: pp. 63–81). They agreed, for instance, not to subject the thousands of “agent” branches that Safaricom had licensed across the country to the same rigorous “know your customer” requirements and capital and liquidity regulations as ordinary banks. They also encouraged commercial banks to develop M-Pesa-linked checking and savings accounts to reach poor, rural customers that had previously been beyond their reach.

The result of this more “laissez-faire” approach to financial innovation has been an explosion in financial inclusion. According to the GSMA 2014 Mobile Money Deployment Tracker, the percentage of Kenyans with access to formal institutions (prudential or non-prudential), in general, rose from less than 25 percent in 2006 to more than 67 percent in 2013. The GSMA reports that mobile monies have been launched in nearly 300 countries across the globe serving more than 300 million customers, so its growth potential is enormous. Although mobile money represents only one frontier in the “future of money” in less-developed countries, the critical question that researchers like Maurer should be asking is: what can other countries learn from the successful launch of new money and payment technologies in Kenya, Tanzania and the Philippines?

Bill Maurer opens his book by saying that his aim is to “spur innovative thinking in anyone interested in the future of money” (p. 3). In this sense, his work should be judged as a success, if nothing else for his inspired tour through the latest innovations in money. For the anthropologist or aspiring tech entrepreneur, this alone makes it worth a read. But there nevertheless remains a need for political economists to dig deeper into the fundamental question of what types of institutional rules and regulatory practices are most conducive to allowing these entrepreneurial innovations to take off. Whether you’re studying new payment systems like M-Pesa, PayPal, GCASH, and Apple Pay or new monies like Bitcoin or Ripple, the role that the regulatory environment plays in either stymying or promoting these innovative new technologies must come to the forefront of any discussion of the “future of money.” Here’s to hoping that Maurer’s book will inspire a new line of research in this promising area.