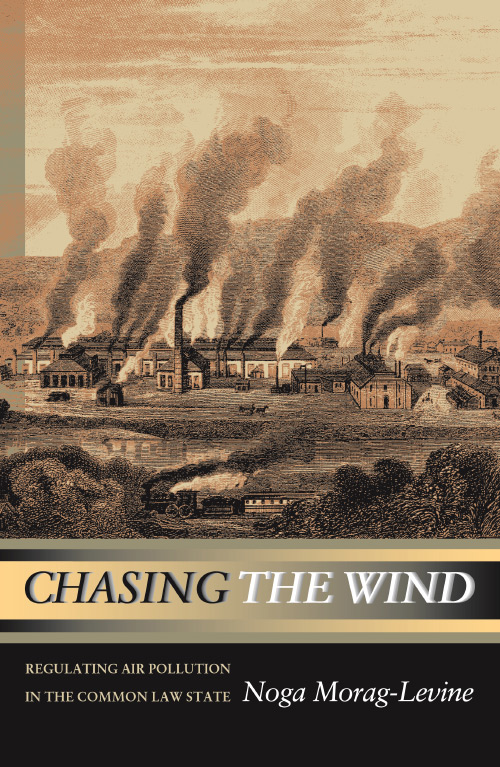 Chasing the Wind
Regulating Air Pollution in the Common Law State
By Noga Morag-Levine
Kindle Hardcover Paperback
This book review appeared in the Spring 2005 issue of The Independent Review.

Political scientist Noga Morag-Levine’s new book Chasing the Wind poses an important challenge to many parties in the debate over environmental law and policy. She sets aside the conventional debate between green partisans seeking greater regulatory intervention and economics-minded critics of current law and policy who seek to reform environmental law to reflect concerns such as the knowledge problem (see, for example, Friedrich Hayek, “The Use of Knowledge in Society,” American Economic Review 35 [1945]: 519–30). Instead, Morag-Levine attempts to reframe the debate as one between a technology-based approach (as in Germany) and a risk-based approach (as in the U.S. Clean Air Act). Although she does not succeed in her attempt, her book offers a wealth of insights into the debate over air-pollution-control efforts and environmental policy. It certainly belongs on the bookshelf of anyone concerned with environmental issues.

Statutes are often poorly written, and books about law imitate statutes far too often. Encountering a well-written book on a legal topic is therefore a rare surprise, and Morag-Levine deserves praise for turning the complexities of environmental law into a lively read. She has a knack for explaining legal ideas without resorting to jargon. The presence of a “plot” also helps the book’s style: the author has a thesis and tells a coherent story. Further, as a commentator on U.S. environmental law and policy, Morag-Levine has a huge advantage: her law degree is not from a U.S. law school, but from the Hebrew University of Jerusalem. Being trained in a somewhat different approach to law (Israeli law schools teach in the British tradition) gives her a valuable perspective on American law. This strength is also a weakness, however, as I discuss later.

The basic thesis of the book is original and provocative. Morag-Levine argues that the law concerning environmental protection contains two opposing traditions: one based in European civil law, which ultimately yielded technology standards for air-pollution control, and the other based in the common law, which came to rely on risk-based standards. The civil-law systems, exemplified in Germany, produced regulatory regimes that specified technological measures that industries were required to take to ameliorate, but not eliminate, pollution problems the industries caused for neighbors. The common-law systems offered injured parties absolute relief through injunctions against polluters, but only when the injured party could prove a link between the harm he experienced and the polluter’s conduct. Of course, as Morag-Levine notes, neither system is pure; the U.S. air-pollution-control regime includes some technology standards, and some elements of risk-based regulation have crept into the civil-law air-pollution-control regimes.

Neither approach is flawless. In general, however, Morag-Levine argues that the European civil-law approach has been more successful at preventing air-pollution problems than the common-law approach she sees embedded in the U.S. Clean Air Act. The problem with this act, according to Morag-Levine, is its “absolutist orientation,” which is traceable to nuisance law:

this absolutist orientation virtually compelled nuisance doctrine to evolve in a way that tightly circumscribed the harms against which its complete protection came into force. A primary constraint was to vary the definition of air pollution injury by location, such that much more pollution was tolerated in urban and industrial locales than in more bucolic settings. Within such industrial locales, victory in air pollution lawsuits was made virtually dependent on plaintiffs’ capacity to prove that, beyond its discomforts, pollution caused disease. Adhering to this regulatory tradition, the [Clean Air Act’s] risk-based standards hinge the scope of the state’s regulatory authority upon scientific evidence of harm at the same time that it all but ignores problems of localized pollution in industrial locales. (p. 25)

The European civil-law approach avoids this outcome by mandating technological fixes to reduce the possible harm even before all the evidence is in.

Morag-Levine’s thesis is original because, to my knowledge, no one has ever argued seriously that the Clean Air Act has much to do with the common law. Market-oriented environmental economists, for example, frequently call for a return to common-law principles in pollution control precisely because modern U.S. environmental legislation in general, including the Clean Air Act, has so little to do with common-law principles. One of the useful contributions of this book is its alternative way of characterizing environmental laws so that the Clean Air Act and nuisance law are grouped together rather than viewed as polar opposites. Although I am not persuaded that Morag-Levine’s approach is the best means of characterizing laws, the distinctions she draws between nuisance law and the Clean Air Act, on the one hand, and the civil law and technology-based standards, on the other, is thought-provoking.

Morag-Levine’s thesis has three major problems that she either does not consider or does not resolve satisfactorily. The first problem is the almost complete absence of discussion of evidence of the environmental laws’ effects. Most glaringly, in the case of the United States, Morag-Levine does not take into account Indur Goklany’s groundbreaking work on the history of air pollution (Clearing the Air: The Real Story of the War on Air Pollution [Washington, D.C.: Cato Institute, 1999]). Goklany shows conclusively that state and local air-pollution-control efforts, not the federal Clean Air Act, are responsible for much of the improvement in air quality. Moreover, Goklany persuasively documents that increasing wealth created a demand for cleaner air and that increasing technological sophistication made it possible to meet that demand. Morag-Levine does not consider any of these factors in her history of air-pollution control; and her work therefore leaves the impression that regulatory efforts occurred in a social vacuum.

The second problem is her almost complete neglect of public-choice theory’s contributions to our understanding of how air-pollution-control legislation has been crafted. For example, the Clean Air Act (technically a series of amendments to an existing law) was the result of a game of political one-upsmanship in 1970 between President Richard Nixon and Senator Edmund Muskie, then the presumptive Democratic presidential nominee for the 1972 election and the possible opponent Nixon feared most. (For a discussion of the Nixon-Muskie rivalry and air pollution, see Andrew Morriss, “The Politics of Clean Air,” in Political Environmentalism, edited by Terry Anderson [Stanford, Calif.: Hoover Institution, 2000]). Muskie, a former governor, had strong views on preserving a state role in air-pollution control. His insistence on a major role for the states, not the common-law tradition, dictated crucial institutional details in the resulting legislation. At the same time, auto makers had a significant influence in nationalizing mobile-source standards to head off a welter of potentially contradictory state-imposed mandates. Although Morag-Levine discusses federalization of air pollution, she rarely mentions federalism as an important component. Such a lapse makes her account much less convincing.

Perhaps the most famous interest-group explanation of U.S. clean-air regulation appears in Bruce A. Ackerman and William T. Hassler’s Clean Coal/Dirty Air (New Haven, Conn.: Yale University Press, 1981). These writers thoroughly document the key role of a special-interest alliance of eastern (high sulfur) coal producers and environmental pressure groups in the 1977 Clean Air Act Amendments’ technology mandate of scrubbers for coal-fired plants as opposed to performance standards that would have produced cleaner air. Because Morag-Levine does not take into account the influence of such political considerations on the structure of the Clean Air Act, her attempt to explain the statute as the result of a common-law tradition is incomplete.

Third, Morag-Levine does not adequately characterize the difference between common law and civil law. She focuses almost exclusively on the common law’s requirement of proof of harm, in contrast to the civil law’s ability to legislate away proof problems. There is much more to a common-law approach, however, than proof requirements. For example, the common law operates iteratively, producing gradual evolution of rules through the examination of multiple individual disputes. Statutory law is more episodic, moving in fits and starts. (For a survey of the differences, see Friedrich Hayek, Law, Legislation and Liberty: Rules and Order [Chicago: University of Chicago Press, 1973]). At any given moment, therefore, it is virtually certain that the common law has not adopted the optimal rule for any particular problem, but is likely to be evolving toward the optimal rule. (Several theories have been proposed to explain why the common law evolves toward optimal rules; see Todd Zwyicki, “The Rise and Fall of Efficiency in the Common Law: A Supply-Side Analysis,” Northwestern University Law Review 97 [2004]: 1551–633.) Although it is theoretically possible for a statutory system to have adopted an optimal rule at any given moment, the discontinuous nature of the legislative process (even setting aside public-choice considerations) makes it unlikely that the rule embodied in the statute will remain optimal for long. Further, there is general theoretical agreement that it is much more difficult for special interests to influence courts than to influence legislatures and regulatory agencies. An important dimension of the difference between statutory and common-law approaches is thus the difference between episodic regulatory efforts, governed by special-interest politics, and a smoother, evolutionary system in large part immune to special-interest influence.

Despite my criticisms, anyone interested in the history of air-pollution-control efforts should read Chasing the Wind. Morag-Levinson provides a fresh perspective on important issues and creatively, if ultimately unpersuasively, argues her thesis. In particular, her case studies of several regulatory efforts under different regimes are valuable contributions independent of the success of her overall thesis.