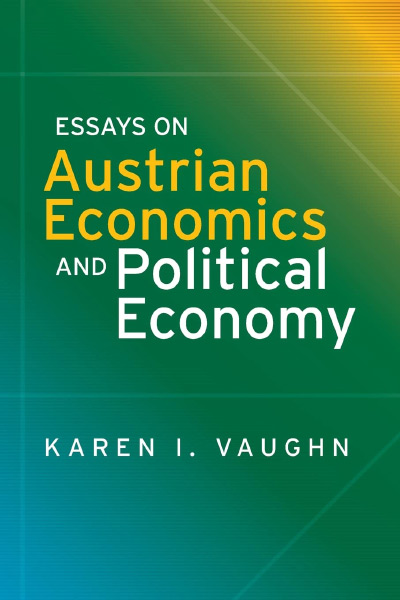 Essays on Austrian Economics and Political Economy
By Karen I. Vaughn
Kindle Hardcover Paperback
This book review is a web exclusive for the Fall 2022 issue of The Independent Review.

Karen Vaughn is an important participant in the “Austrian revival” that is typically dated to the 1970s. At this time, a group of emerging scholars came to appreciate the work of Carl Menger, Ludwig von Mises, and F. A. Hayek as providing an alternative to Paul Samuelson's “neoclassical synthesis,” which married neoclassical microeconomics to Keynesian macroeconomics. I think it is fair to say that most academics familiar with Vaughn think of her as a program builder. She played a role in bringing both the Center for the Study of Market Processes (now Mercatus) and the Public Choice Center to George Mason University in the 1980s. She served as president of the History of Economics Society, the Southern Economic Association, and the Society for the Development of Austrian Economics, of which she was also a founding member. Across several decades she transitioned from an orthodox neoclassical economist to one of the institutional leaders of the rebirth of both Austrian economics and political economy more generally.

Essays on Austrian Economics and Political Economy collects Vaughn's academic essays on these topics. It is a welcome collection that brings together and highlights the contributions of a well-read and thoughtful scholar. The essays range over nearly four decades and topics as diverse as the history of economic thought, subjectivism, the market process, welfare economics, complex systems theory, liberalism, and democracy. They provide a fascinating glimpse into the evolving thoughts of an economist who refuses to be satisfied with received wisdom or with her own views. Because Vaughn's own views evolved so much over this time period, instead of evaluating particular arguments I will comment on one primary thread running through the text: the debate between Israel Kirzner and Ludwig Lachmann on the equilibrating tendencies of the market process.

For nearly two decades, Austrian economists lined up on various sides of an intramural debate about whether the market process can be understood as tending towards equilibrium. Kirzner maintained that some such tendency was necessary to explain the extent of order observed in markets. Paris gets fed and pencils get made (pp. 112–120). Lachmann, by contrast, argued that different individuals might interpret given market signals in different ways. For example, the success of the Marvel Cinematic Universe has led many studios to try and replicate the success of a shared cinematic universe. None of these imitators has really succeeded, because it turns out there is more to making a crowd-pleasing movie than mashing together a set of popular intellectual properties. The market punishes waste and rewards satisfying consumers, but imperfect humans do not always learn the right lesson from these punishments and rewards. The resulting “incompatibility of plans” (p. 121) means that there is no determinate general equilibrium towards which markets are headed.

Several of the essays in this book were written while this debate was raging, offering Vaughn’s perspective on why neither Kirzner’s nor Lachmann’s position is satisfactory. Along the way she makes several excellent points. She is careful to note that the debate is not about whether equilibrium obtains in the real world, but rather about “how to conceptualize” (p. 112) the orderliness that markets generate. The mistake made by market socialists (Ch. 1) is to take the metaphor of equilibrium as an existing reality that they can use to engage in central planning. Vaughn also fairly treats the evolution of Kirzner’s arguments on this topic (Chs. 4 and 6). She points to a number of cases in which Kirzner moves closer in the direction of Lachmann. Finally, she argues that complex adaptive systems theory may provide a potential alternative to general equilibrium as a way to conceive of the orderliness of markets (Chs. 8, 9). Real world markets are path dependent (p. 183): they do not aim at a determinate, pre-defined equilibrium that exists independent of the market process. Rather, the ways in which they evolve today are heavily dependent on how they evolved yesterday.

It may seem, then, that Vaughn is taking Lachmann’s side in this debate. If there is no determinate configuration towards which the market process is headed, how does it make sense to say that the market tends towards equilibrium? Market is as market does. However, while she takes Lachmann’s side in describing the situation confronting economic actors, she also criticizes Lachmann for failing to propose a workable alternative to Kirzner. Lachmann’s discussion of institutions is but a sketch. The reader will find little in the way of substantive propositions (pp. 126-7). Most Austrians and fellow travelers are happy to accept Lachmann’s ideas that institutions serve as “points of orientation” (p. 126) that reduce uncertainty, but that is about as far as his analysis goes.

We [Vaughn] have agreed with Lachmann on all aspects of his description of the human condition, we have followed his criticism of the conventional orthodoxy and have been eager to follow him in his examination of real markets, but we feel that we have taken a tour of individual trees and have missed the forest. Lachmann leaves us with a detailed understanding of some market processes, but no overall theory of the market process itself. (p. 129)

Vaughn’s analysis strikes me as largely correct. Lachmann’s work does an admirable job laying out the problem of an uncertain future but does not offer as tractable a set of tools for applied analysis as Kirzner’s corpus does. In the grand tradition of this decades-long debate, then, I offer my own solution to this conundrum that is sure to please no one. I argue that there is a reading of Kirzner (which he might not agree with) which saves his core claims even granting Lachmann’s critiques.

Second, creativity is what we care about. Vaughn (Ch. 4) and Lachmann are right to emphasize the power of human imagination. But again, for Kirzner, the perception of opportunities is a helpful metaphor for understanding creativity and insight. In a 1997 interview, Kirzner defends his model of opportunities out there waiting to be discovered:

Philosophically, people have objected to that. I do not mean to convey the idea that the future is a rolled-up tapestry, and we need only to be patient as the picture progressively unrolls itself before our eyes. In fact, the future may be a void. There may be nothing around the corner or in the tapestry. The future has to be created. Philosophically, all this may be so. But it doesn't matter for the sake of the metaphor I have chosen.

Finally, the tendency to coordination is a property of market institutions, not of discovery or imagination per se. Both Kirzner and Lachmann locate the capacity for entrepreneurship in the individual. But the institutional context of markets is what makes entrepreneurship coordinating. The fact that expectations might diverge is a problem of—as Vaughn puts it—“the human condition” (p. 129). To defeat Kirzner’s argument, it is not enough to point out that different expectations about the future can lead to individuals adopting incompatible plans. That is always part of human life. Rather, one would have to show that market institutions cause discoordination. While this is not outside the realm of possibility, Kirzner (1997, “Entrepreneurial Discovery and the Competitive Market Process: An Austrian Approach,” Journal of Economic Literature 35 [March]: 60–85, p. 82) correctly notes that no one in the market process tradition has yet supplied such an account.

While this short account does not provide a wholesale defense of Kirzner’s ideas, it may help identify points of disconnect with his critics. A successful objection would have to argue that (1) equilibrium is rarely or never a useful metaphor for coordination, (2) opportunity perception is rarely or never a useful metaphor for creativity or entrepreneurship, or (3) that there are certain situations in which market institutions actively causediscoordination. Any or all of these objections may ultimately be persuasive, but the mere possibility of divergent expectations is not enough to render Kirzner’s account sterile.

I have only touched on one major aspect of this nice collection of Vaughn’s essays. The rest of the collection touches on many other fascinating topics, including the possibility of an Austrian defense of the market order and the subtle differences between Hayek’s economics and the neoclassical tradition. Vaughn’s nuanced and careful reading of both classic and more contemporary authors in political economy shines through in each of the chapters, offering useful insights and provoking questions along the way.