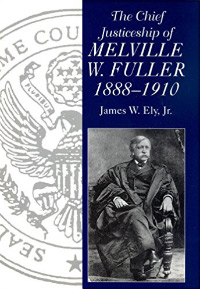 What better topic for the first volume of a history of the Supreme Court than the Fuller Court? It was, for all intents and purposes, the first modern Supreme Court, the first to regularly decide the sort of cases common today, ranging from appeals of regulatory decisions to claims for civil rights. Moreover, many of its decisions continue to shape constitutional law—for example, Roe v. Wade can be understood only in light of the Fuller Court’s decision in Lochner v. New York (1905). According to James Ely, the Fuller Court is also deeply misunderstood. It has traditionally been characterized as knee-jerk antilabor, antiregulation and pro-business, willing to invent doctrines such as dual federalism and substantive due process to justify its prejudices. Ely, in line with recent revisionist scholarship, argues that this characterization is wrong: Fuller and his colleagues were neither as consistently pro-business nor as innovative as the received wisdom suggests. Instead of usurpers, they were honest craftsmen, doing their best to apply a new constitution to a new world.

To support this characterization of the Fuller Court, Ely devotes the bulk of his book, over half of the text, to a careful examination of its decisions. Arranged by topic, his chapters show the Court pursuing the goals traditionally imputed to it, from protecting entrepreneurial liberty to defending the national market. However, Ely’s tour also reveals that many of the famous cases are atypical. Looking more widely at the Court’s record makes evident that these protections were not absolute; the Court upheld far more regulatory legislation than it struck down. And when it did strike down legislation, it drew on established traditions in American thought, traditions that stressed public purpose, private rights, and antagonism to special interests and wealth transfers and opposed the unlimited power of majorities. The result was a complex and nuanced interpretation firmly grounded in respectable constitutional doctrines.

In correcting the traditional accounts, Ely is careful not to replace demonology with hagiography. He does not idolize the Fuller Court; nor does he apologize for its shortcomings. Indeed, he goes out of his way to point out that the Court’s vision of liberty was not ours. Most of its judges had very narrow ideas about which rights were constitutionally protected. For example, they were unwilling to overturn laws enforcing social norms about the role of blacks and women.

In laying out the Fuller Court’s decisions, Ely rescues it from the traditional charges of bias and brutality. Yet in the end, the Fuller Court that he reveals seems almost incoherent. How, we wonder, could the same men who wrote the paeans to liberty in Lochner join in Plessy v. Ferguson (1896), which validated the doctrine of “separate but equal”? What constitutional principles led them to allow a state to ban oleomargarine, but not yellow-dog contracts? To make sense of these twists and turns, Ely argues that we must consider carefully the circumstances — economic, political, cultural, and legal — in which the Court acted. Only then can we make sense of what it did.

The most obvious factor shaping the Fuller Court was its unique position in history. During this period, the Court was called on to make many decisions that were literally unprecedented. Some were unprecedented because they involved new forms of government regulation. During this period, governments at all levels undertook to regulate a wider range of private activities, often using new methods, such as commissions. Those hurt by these regulations looked to courts for recourse, arguing that the regulations violated their constitutional rights. Other decisions were unprecedented because they involved new clauses of the Constitution, such as the Fourteenth Amendment. Adopted during Reconstruction, this amendment radically altered the constitutional landscape by giving people federal protection against state governments. In doing so, it reversed the hands-off attitude toward states that had served to protect slavery since the founding.

Ely argues that, notwithstanding the claims of its critics, the Fuller Court’s reaction to these novelties was not to read its own prejudices into the Constitution. Indeed, he argues that even when it had no direct precedent, the Court still turned to history for guidance. In looking for antecedents to the Fuller Court’s rulings, Ely casts his net wide. The result is an enriched understanding of the Court’s place in history. Perhaps nothing illustrates this better than his analysis of Lochner, the archetypal Fuller Court decision. In this case, the majority struck down a New York law regulating the work week for bakers on the grounds that it violated their liberty to contract. Ely argues that, contrary to Justice Holmes, the majority did not simply read Herbert Spencer into the Constitution. Instead, it interpreted due process as prohibiting laws that privileged one class or group, in this case bakers, over others. Ely points out that concern over special-interest legislation had been a staple of political discourse since the Jacksonian era. Moreover, these concerns had been tied to the notion of due process by state courts throughout the pre–Civil War period. Seen from this perspective, the Lochner majority, rather than radically rejecting the past, adapted the past to fit new conditions.

As Ely argues, the Court’s resolution of these novel challenges had implications for more settled areas of the law. For example, when the Court reviewed state regulations under the Fourteenth Amendment, it could not help but affect the balance of power between state and national governments. As the Court was committed to federalism, it had to work hard to restrain state governments without reducing them to empty shells. Ely argues that the attempt to strike a balance between the contradictory principles of federalism and limited government led to decisions that appear inconsistent to us.

The final factor Ely points to as constraining the Fuller Court is its political circumstances. Politics influences the Court in many ways. Although Ely does not stress this point, justices in the late nineteenth century were much less timid about participating directly in politics. Many of them had extrajudicial political aspirations; Justice Field actively sought the Democratic nomination for President in 1880. And he, like many of the justices, maintained his ties to politicians, offering them advice and consulting with them. It is not clear how, if at all, these career concerns influenced judicial decisions.

But these sorts of career concerns are not really what Ely means when he talks about political constraints on the Court. He argues that it also faces structural constraints arising from its place as one of the three branches of the national government. As is to be expected in a system of checks and balances, the Constitution gives the other branches methods of controlling the courts, ranging from amendment to appointment. It is popular to dismiss the efficacy of these methods and to treat the Court as unconstrained by the other branches. Ely argues otherwise, claiming that, for whatever reason, the Court pays attention to the other branches. As evidence that the Court felt constrained by politics, Ely points out that it picked its battles carefully. Thus, it was much more likely to overturn state legislatures, which had little recourse, than Congress, which had more. And when the Court took on Congress and the president, it usually did so when the other branches disagreed and hence were less likely to unite in response. Thus, the Court was much more hostile to the income tax, which had only narrow support, than to the Sherman Antitrust Act, which enjoyed wider support. As Ely notes, it took the proponents of the income tax almost twenty years to pass a constitutional amendment overturning the Court’s decision in Pollock v. Farmers’ Loan & Trust (1895).

Ely argues that such realpolitik also explains the Court’s deference to Southern racists in its civil rights cases. Given political realities, it is hard to imagine that a judicial decision overturning Jim Crow would have stood up. By the end of the century, southern racism was an established fact in national politics: in return for acquiescing in the dismantling of Reconstruction, Northerners got support for other policies. Given the robustness of this deal, the Court had no prospect of successful interference.

Reduced to a bumper sticker, Ely’s explanation of the inconsistencies in the Fuller Court’s record is simple: “the constraints did it!” That is, in deciding cases, the Fuller Court did not, because it could not, ignore its social and political environment. That environment provided the Court with a vision of a limited government, one intended to preserve economic liberty and private property. It also provided the justices with a new set of issues, many having to do with how to handle a growing economy. And finally, the environment presented them with a political reality that limited their freedom. Ely argues that when we view the Court through the lens of its circumstances, taking these constraints into account, the decisions that strike us as inconsistent or incoherent become consistent and coherent. This account of the Court is likely to disappoint those, like Richard Epstein and Bernard Siegan, who pin their hopes for limited government on the Supreme Court. Ely’s account suggests that they need to rethink their theories of constitutional politics. And when they do, histories such as this will provide the raw material for testing their conjectures.