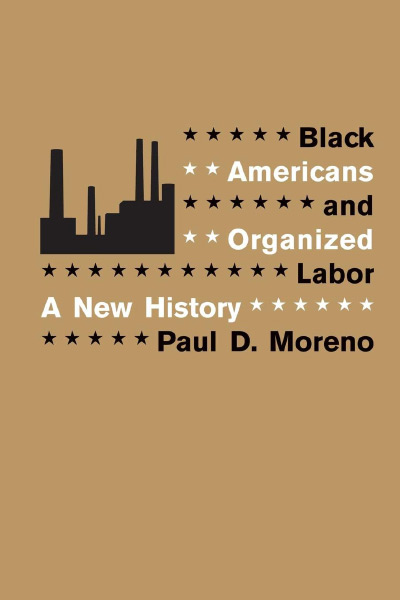 Black Americans and Organized Labor
A New History
By Paul Moreno
Kindle Hardcover Paperback
This book review appeared in the Winter 2006/07 issue of The Independent Review.

The intellectual and ideological follies of contemporary historical scholarship are especially prevalent in the field of labor history. Absurd Marxist paradigms flourish there. The vast majority of labor historians are completely innocent of any knowledge of modern economics, including labor economics, despite its obvious relevance to a coherent understanding of labor-management relations. Reading a typical labor history book requires the reader to ignore or “translate” a great deal of ideological claptrap, incoherent analysis, and tendentious interpretation to absorb whatever useful information the author has uncovered. Given the state of the field, Paul Moreno’s excellent Black Americans and Organized Labor: A New History comes as an especially welcome breath of fresh air.

Moreno tackles a very important and also very “hot” topic in U.S labor history—the often tumultuous relationship between African Americans and labor unions. Black Americans and Organized Labor is by far the most comprehensive, most coherent, and best-documented work on the subject. Moreno’s command of the relevant literature is outstanding, and his detective work in locating many obscure but important sources is impressive.

Even better, Moreno approaches the subject without the leftist ideological baggage that burdens most other writers in the field and with a good grasp of relevant economic concepts. In particular, he understands that contrary to illusory notions of innate worker solidarity, individual workers and groups of workers have widely varying economic interests. He holds no romantic or ideological illusions about labor unions; he understands that their basic economic goal is to create a labor cartel for their members’ benefit.

Another impressive feature of this book is that Moreno, unlike many historians, does not treat black workers and the black people more generally as passive bit players in a larger class conflict between “capital” and “labor.” Nor, unlike many historians, does he pay disproportionate attention to the relatively few examples of racially egalitarian unions in the pre–New Deal period, which some historians use as purported exemplars of the true spirit of labor solidarity. Rather, he properly treats African Americans as striving as best they can to promote their individual and collective well-being in a hostile economic and social environment.

As would be expected, black Americans disagreed among themselves regarding the best strategy to employ in their own self-interest, but a coherent historical narrative emerges from Moreno’s work. In the post-Reconstruction, pre–New Deal era, blacks, faced with harsh union discrimination and an indifferent (at best) government, typically sided with employers in the era’s great labor-management disputes. Most black intellectuals favored a competitive labor market in which black workers could compete without fear of being shut out by cartels formed by white workers. Black leaders, for example, consistently opposed laws that would prohibit courts from enjoining strikes. Blacks, however, were not always hostile to organized labor. On the rare occasions when unions treated blacks fairly, blacks joined in impressive numbers. Left-leaning black leaders, such as W. E. B. DuBois, consistently tried to find common ground with unions.

In the New Deal and immediate post–New Deal eras, the strategic calculus for black workers changed. The emergence of the Congress of Industrial Organizations (CIO) created hope for a racially egalitarian labor movement, and the dominant statism of New Deal labor and economic policy made prior appeals to individualism politically and ideologically anachronistic. The black elite and, to a lesser extent, black workers embraced labor unionism, in part because they were swept up in the ideological currents of the times and in part because the emerging coalition between government and labor unions seemed too strong to resist. As Ken Kersch (Constructing Civil Liberties: Discontinuities in the Development of American Constitutional Law [New York: Cambridge University Press, 2004]) has noted, black political activists began to model their civil rights activism on the corporatist, group-rights-oriented model the labor unions had pioneered.

In later years, once it became clear that labor unionism was in terminal decline in the private sector and that the labor movement was not going to solve blacks’ broader social and economic problems or even deal with those problems meaningfully, blacks returned to a pro-employer (though not antiunion) stance. By this time, they had almost completely abandoned the individualist, antistatist outlook of their forebears and instead flexed their newfound political muscle by allying politically with the most powerful employer in the United States—the federal government. Since the 1960s, not only has the federal government provided a disproportionate amount of direct employment to blacks, but it has also enforced antidiscrimination laws against private employers and pressured government contractors to implement affirmative action programs. In return, blacks are among the strongest supporters of an expansive federal government.

In short, blacks have consistently modified their labor-market strategy to take into account the prevailing socioeconomic trends. In the era of individualism and “robber baron” capitalism, they supported individualist economic policies and allied with employers. In the era of pro-union statism, they embraced collective bargaining. With the decline of organized labor in the private sector and the rise of the special-interest state, they embraced the big-government policies that they perceived as serving their interests.

More generally, Moreno persuades his readers that labor history looks very different from the perspective of African American workers than from the traditional perspective of pro-union labor historians. His book is filled with many interesting revisionist tidbits, too many to do justice to in this review.

One topic of particular interest in Moreno’s discussion is strikebreaking. In the pre–New Deal period, blacks were found disproportionately in the ranks of strike-breakers. Among the worst villains of traditional labor history, strikebreakers are at best portrayed as dupes of greedy capitalists and at worst depicted as Judases, evil “scabs” who betrayed their laboring brothers and class interest for short-term gains. For blacks, however, strikebreaking in the pre–New Deal era was a way of entering advancing industries otherwise closed to them by union discrimination. Although labor historians often assert that strikebreaking blacks were dismissed once the strikes ended, this outcome was routine only when the strike was successful and the victorious union could demand the strikebreakers’ dismissal. When employers emerged victorious, they not infrequently retained the blacks hired as strikebreakers and, having broken the color line previously imposed by their white workers, continued to hire blacks thereafter. Black strikebreakers, in short, were neither grossly naive nor evil, but rather sensibly took advantage of labor-market opportunities otherwise closed to them by prejudice.

Of course, no book review is complete without a few quibbles. Moreno relies too strictly on his view of unions as purely economic cartels seeking to exclude blacks to control the labor supply and to limit competition. He is therefore at something of a loss to explain why unions engaged in discrimination even in some circumstances where doing so seemed directly contrary to the union members’ economic interests, such as when blacks excluded from unions helped employers to limit workers’ wages

Moreno acknowledges only in passing (pp. 174, 244) that an important reason why unions discriminated is that they themselves served a social function, much as a lodge or a private club does. White union workers refused to allow blacks into their unions because their own social status would decline if they associated with blacks and because mixing with blacks would imply a degree of social equality between them that most whites belligerently refused to concede. Moreover, discrimination against blacks (and other minorities) served a political function because it allowed unions to pose as defenders of all white workers, including unorganized white workers, against attempts by capitalists to subvert the white American working man’s standard of living. None of this conflicts with Moreno’s view of labor unions as cartels. However, contrary to that view, unions did not always engage in the behavior associated with a pure economic cartel; they also acted as a social cartel and as rent-seeking organizations pursuing broad political support as a reward for their “selfless” racist policies.

Another quibble is that the book occasionally loses focus and strays from its topic. The deviation is sometimes nevertheless rewarding for the reader, as when Moreno provides an interesting and original critique of Booker T. Washington (p. 75). At other times, however, the reader muddles through such digressions as a discussion of the status of blacks in baseball in the late nineteenth century (p. 70).

These quibbles aside, Black Americans and Organized Labor is truly a major accomplishment, and I recommend it highly for readers with an interest in U.S. history. Though it is difficult to predict what will occur in the quirky and highly ideological left-wing world of labor history scholarship, Moreno’s book should quickly become the standard work on the relationship between blacks and labor unions.