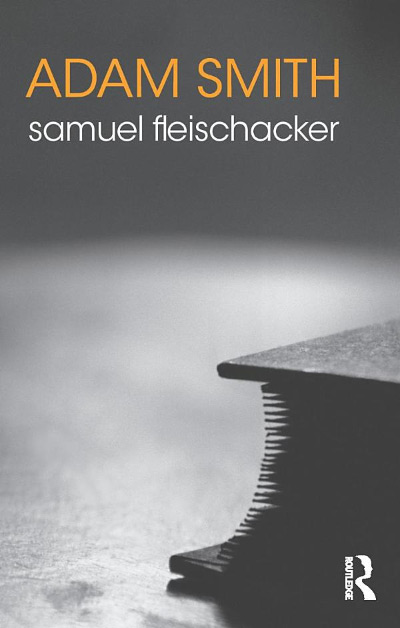 The book’s first chapter is about the context in which to place Adam Smith. We are immediately told it is not the same one shared by Ayn Rand or Bernard Man- deville, but rather that of David Hume. We are also told that the (incorrect) image of Smith as a “rational egoist” (p. 6) has been made possible by the decline in popularity of The Theory of Moral Sentiments (TMS), the first book Smith published (in 1759) and a best seller in his day. Fleischacker’s work seems to be meant to correct this. For Fleischacker, Smith was instead a curious thinker “interested in everything” (p. 16).

The second chapter deals with the early works of Smith, published posthu- mously (with the exception of his “considerations on language” and the review of Dr. Johnson’s dictionary, both published in his lifetime), which for Fleischacker are examples of cross-cultural comparisons. Indeed Smith “moves among English, Greek, Latin, and Italian, and even makes references to Armenian, Hebrew, and Gothic” (p. 35) and mentions African kings. Here Fleischacker also argues that Smith is a serious “common sense” philosopher, rather than a skeptic or a realist. In the next chapter, the first on The Theory of Moral Sentiments, Smith is presented as being far from a deontologist or a utilitarian, but rather closer to a virtue ethicist.

So, for Fleischacker, Smith is not Kant, nor Bentham, but also not Shaftesbury nor Hume nor Hutcheson. For Smith, self-interest is relevant, but not key; benev- olence plays a role, but it is not the sole virtue that counts; and we do not have a sensory organ to determine the approvable quantity of benevolence. Smith is a sen- timentalist to whom circumstances matter more than just feelings. The impartial spectator is in fact the instrument that Smith uses to evaluate the propriety of feel- ings given the circumstances. Sympathy, for Smith, cannot thus be just contagion of feelings, but a projection into the circumstances of another person to evaluate the propriety of the observed feelings of the observed with the imagined ones of the observer. What to me is most interesting is Fleischacker’s conclusion that for Smith, “self cannot so much exist until it is awakened to such reflection by way of its sym- pathetic engagement with others” (p. 92), capturing the radical social nature that Smith attributes to human beings.

Furthermore, Fleischacker leads us to see that “[t]he impartial spectator enters TMS as a bit of common sense” (p. 108) not as a divine presence. Smith’s relation with the divine and religion is complex. In a chapter on Smith and religion (chapter 8), Fleischacker concludes that Smith “endorses a moral faith in God” (p. 201). But when talking about justice, it is the human feeling of resentment that is at the base of punishment. General rules are like heuristics that help us with our self-deceit, not something we have or follow because of their divine origins or their utility. Utility is simply an afterthought.

Even if Fleischacker thinks that Smith needs “a transcendental principle by which to judge among different moral norms” (p. 123), he does not think that utili- tarianism is the one. For him, Smith struggles with relativism but does not fully fall into its traps. In his reading, for Smith happiness is intertwined with virtue and duty. Thus, Fleischacker suggested instead “a libertarian principle of some kind” (p. 123). In a later chapter (chapter 10: police), talking about the policy prescriptions in The Wealth of Nations (1776), Fleischacker elaborates by connecting the two books: “One distinctive feature of Smith’s liberalism is that he thinks governments should attend to economic policy in part to help people develop elements of virtue. It is just that he thinks that governments can best foster virtue—foster the independence needed to achieve virtue—by not doing anything: by not interfering with people’s lives” (p. 262). He further elaborates in the concluding chapter (chapter 12: liberalism). Liberalism, but not libertarianism, is what best allows people to be “independent,” to live in moderation, with a morally healthy contempt for the pursuit of material wealth in excess of food, clothing, and lodging.

Furthermore, Fleischacker spends a whole chapter (chapter 6: the character of virtue; description and normativity) arguing that TMS is a normative book from start to end—or at least that normative claims are inseparable from allegedly descrip- tive ones. This contrasts with The Wealth of Nations, which for Fleischacker is a strictly descriptive work (chapter 11: economic principles), at least in his treatment of natural and market price, real and nominal price, productive and unproductive labor, and the invisible hand.

The book also has a chapter on justice (chapter 9), where Fleischacker reiterates that for Smith justice is based on sentiments, not on reason or utility. He tiptoes around the idea of distributive justice, linking Smith to Thomas Aquinas’s idea of “right of necessity” for the poor.

The book is meant for philosophers and nonphilosophers alike. For the most part, I think it fulfills its aim. On the other hand, as a nonphilosopher, I found some claims difficult to understand. Why, for example, should one worry about relativism? What is wrong with it? The book takes this worry for granted. Maybe a word of explanation would have helped readers like me understand why Smith has a problem if he tells us that we as humans can only recognize local optima, and if there is a global optimum, it is not within our ability to identify it.

The book is also meant for scholars and nonexperts alike. Again, for the most part, I think it fulfills its aim. Fleischacker engages with some major scholars with whom he disagrees, to show us the correct way to read Smith. Fleischacker may stand on the ruins of giants with wrong ideas, but one would guess he might also stand on the shoulders of giants (or many midgets for that matter) who presented views close to the ones present in this book. To acknowledge more than only a couple of points from a couple of authors may have been a tool to help nonexperts. But, as Smith said, gratitude cannot be enforced, and the secondary literature on Smith is immense. Eight pages of bibliography is surely plenty.