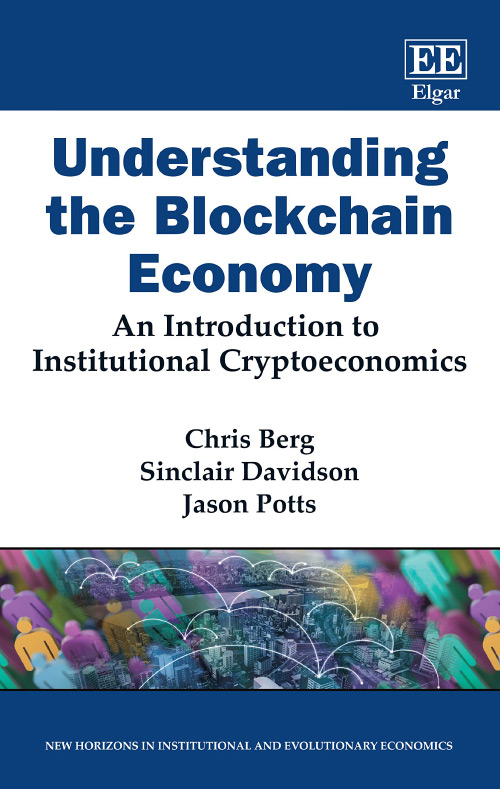 Understanding the Blockchain Economy
An Introduction to Institutional Cryptoeconomics
Chris Berg, Sinclair Davidson, and Jason Potts
Hardcover Paperback
This book review is a web exclusive for the Fall 2020 issue of The Independent Review.

This book claims to have “discovered” (and the irony quotes are implied by their description, not my scorn) the reason why blockchain technology is economically significant. Not that others have failed to recognize that there is significance; the discovery lies in the precise explanation for how that significance will play out in the world. The name the authors give to the explanation is “institutional cryptoeconomics.”

There has been quite a bit of other work in this space, of course. The authors cite some of their own work that reviews previous contributions; Philip Auerswald’s book The Code Economy (New York: Oxford University Press, 2017) and my own new book, Platforms: Perils and Promise (London: IEA, 2020), have given broad overviews. The authors here make an insightful comparison to Adam Smith, who recognized the key value proposition to organizational form—division of labor, if you’re taking notes—but had no way of predicting the impact industrialization would have on his world in the next half century. The authors here believe they have identified the key value proposition in the new economy, and are quite clear that they are no more likely than Smith was to be able fully to understand the implications.

The comparison is still a rather arrogant one—to be fair, the authors give this ironic recognition themselves—because with hindsight we know that Smith was right about division of labor. As the authors put it:

Blockchains are still very much an experimental technology, mostly in the proof-of-concept phase of research and development—just like factories were when Adam Smith wrote the Wealth of Nations. “But Professor Smith,” his colleagues could fairly have said, “all I see about me are small farms and muddy roads. Your ‘pin-factory’ theory only seems to apply to a tiny and newish part of the economy.” But Smith saw how this new institutional technology would shape the way economies grew and developed (p. viii).

They go on to describe the significance of their contribution:

Broadly considered, this book is about the economic consequences of new institutional technologies of trust and the production of consensus about economic facts. Before blockchain, neither of these were frontier research topics in economics. (p. viii).

The difference is that Berg et al. focus (almost) exclusively on the problem of trust, and imagine the likely institutional response. That is, suppose that trust is the binding constraint, the type of transaction cost that most inhibits profitable and beneficial economic activity. The predicted institutional response, either from evolutionary or innovation-based pressures, will be confined to the set of organizational forms that solve that problem. The authors make a nice (and, I think, accurate) comparison to Alfred Chandler’s analysis of the corporation (The Visible Hand [Cambridge, Mass.: Harvard University Press, 1977). The corporation had to solve the new problems that faced (among others) railroads: huge capital costs, far-flung operations with costly communications, and the need to maintain accurate schedules and predictable service. To those problems, corporations were their answer. No one fully understood that at the time, and in a sense Chandler didn’t “discover” anything; all Chandler did was explain why the multidivisional corporation, with its seemingly catastrophic separation of ownership and control, is an optimizing institutional response to the key problems of raising capital and monitoring complex contracts.

Again, the authors recognize the significance of their claim. If they are right, the new solutions to the problems of trust are just as important, and as disruptive, as the creation of the joint stock corporation. That means that the transformation, if it occurs, will happen on a massive scale and at breathtaking speed. The institutional advantages of the joint stock corporation, in terms of raising large amounts of capital and monitoring and enforcing contracts, were such that the commercial world went from “no corporations” to “above a certain size, only corporations” within a century. By analogy, at this point, uses of blockchain protocols to solve large-scale commercial problems are nearly unknown, but, in a few years, no other form of organization will be viable.

The description the authors give of the way institutional cryptoeconomics will change organizational forms is complex, because they have tried to think through some of the implications of the basic insight. I would summarize the impact overall using a different analogy: where Berg et al. compare blockchain protocols to the corporate form, I would compare the innovation to the creation of derivatives. Derivatives are the parsing and commodification of aspects of an asset. A “put” or a “call” option, for example, is the ownership of the change in price of the asset, not the asset itself.

Blockchain protocols and the “smart contracts” they enable on platforms such as Ethereum mean that managers in organizations can operate at one remove from direct monitoring and enforcement. Remember, derivatives are “derived” from a real asset, but then exist on their own and can be bought and sold independently (although prices of West Texas Intermediate crude oil recently dipped to minus $37, reminding us that there is some connection between the asset and the derivative—in this case, futures contracts). Smart contracts—code written using blockchain protocols to embody contingencies or trees of contingencies—can take over many of the features of the manager. And then once those contracts are set up, they can operate on their own with considerable built-in intelligence, with existing smart contracts actually negotiating new contracts. We are used to this sort of thing already in “machine trading” on the stock or commodity exchanges, where algorithms compute prices and instantly execute instructions, sometimes on a huge scale, if certain conditions are met.

If Berg et al. are correct, then the form of firms may change in ways that are hard to recognize. More than a decade ago, I tried to explain why “Bosses Don’t Wear Bunny Slippers,” meaning that Coase’s insight about transaction costs explaining the existence of firms places a limit on “contracting out” for services and supply chains. But last year I was more equivocal, saying “Maybe Bosses Do Wear Bunny Slippers,” given the reduction in the relative cost of using smart contracts and blockchain protocols for monitoring and oversight of commitments from other market participants.

Berg, Davidson, and Potts have given us a worthy, and very readable, extension of the basic Coasian insight about organizational form. Coase never said that large corporate forms of organization are in any absolute sense ideal. Coase asked a simple question: if markets are so great, and prices are so efficient at directing resources, then why are there firms? The answer was “transaction costs.”

But what if transaction costs fall, dramatically? The notion of institutional cryptoeconomics demonstrates that the future might have us answering a different question: if smart contracts can replace the monitoring and enforcement functions, why do we need managers? And the answer is that we do not.