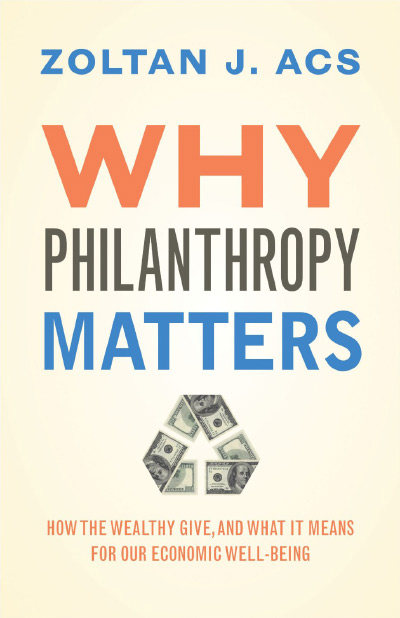 Why Philanthropy Matters
How the Wealthy Give, and What It Means for Our Economic Well-Being
Zoltan J. Acs
Kindle Hardcover Paperback Audiobook
This book review appeared in the Fall 2014 issue of The Independent Review.

Zoltan Acs’s Why Philanthropy Matters: How the Wealthy Give, and What It Means for Our Economic Well-Being is a usefu book, appropriate to academics and an informed general readership as well as in undergraduate and graduate seminar-style classrooms (I myself am requiring it in a masters-level seminar this semester). Although the book has limitations, as discussed later, it raises timely issues about the American economy, in particular the nexus of capitalism and philanthropy in America.

Acs implicitly poses the following question in his book’s title: Why does philanthropy matter? Throughout the book, he cogently argues that philanthropy solves the “problem of wealth” and its corollary of the presence of vast inequality in capitalist economies, specifically America’s. The “defining characteristic of capitalism,” Acs writes, “has been its amazing wealth-generating capacity” (p. 90). And the defining characteristic of American capitalism is the wealth generated by entrepreneurship: “At the heart of American-style capitalism—and the ability to attracand sustain entrepreneurial activity—is an acceptance of the cycle of creative destruction” (p. 9). Acs’s phrase “the cycle of creative destruction” of course invokes Joseph Schumpeter’s theory of entrepreneurship. (Schumpeter, in Capitalism, Socialism, and Democracy [New York: Harper & Row, 1950], famously imbued his theory of entrepreneurship with the force of nature as “the perennial gale of creative destruction” and crowned it “the essential fact about capitalism” [pp. 83–84].) One of the most problematic effects of Schumpeterian entrepreneurship and creative destruction in America is inequality. Acs observes: “[T]he forces of creative destruction and economic growth since then have resulted in uneven allocation of wealth across the population. This is perhaps the fundamental tension in American capitalism: a balancing act between encouraging vast accumulations of wealth and maintaining economic opportunity” (p. 24). Too often the story of capitalism ends here at inequality. If an economy enjoys the fruits of capitalism—that is, its wealth—it must also bear its evils—that is, inequality. But Acs does not end his story of American capitalism there. Rather, he continues and completes it by complementing capitalism with philanthropy. He writes: “Rarely is [philanthropy] understood as an entity intertwined with American capitalism. Yet, it has both emanated from the capitalist system and continually nurtured the system. It is a product of capitalism—another way in which industrialists have sought to shape American society and values” (p. 150).

Philanthropy, in Acs’s framework, is the key instrument in reducing the pernicious effects of capitalism, thereby strengthening capitalism in two ways. First, “philanthropy, when targeted to universities, research, and other productive uses, lays the groundwork for new cycles of innovation and enterprise” (p. 10). Second, “philanthropy—like creative destruction—provides a mechanism for dismantling the accumulated wealth tied to the past and reinvesting it to strengthen the entrepreneurial potential of the future” (p. 11). In Acs’s account, American capitalism and philanthropy together constitute a virtuous circle. Acs tells his story in Why Philanthropy Matters cogently and efficiently, while also supporting it well in most places with interesting research and other evidence.

The book, however, is far from perfect. There are several significant limitations, three of which I discuss here. First, much of his argument for the complementarity of capitalism and philanthropy in America rests on a particular historical moment. Acs describes in chapter 1 that the inspiration for Why Philanthropy Matters is the Giving Pledge, “an effort by Bill Gates and Warren Buffet to get the world’s richest individuals and families [today] to give away half of their wealth during their lifetimes” (p. 1). In fact, Acs includes a large appendix in the book detailing those Giving Pledge letters. Yet in his account Acs adduces most of his evidence from the end of the nineteenth century and the beginning of the twentieth—the age of the industrial titans and their philanthropy in building American institutions. Leland Stanford is Acs’s favorite example, who as president of the Central Pacific Railroad redeployed his wealth to found Stanford University. Stanford “did not hoard his money but instead used it to create opportunities for others who had the ambition, as he had, to work hard and make something of themselves” (p. 91). Foundations were also an American innovation of this historical moment as “American philanthropists pushed to have a legal framework so that their foundations would be protected in perpetuity” (p. 109). Yet philanthropy today as represented by the Giving Pledge is very different from philanthropy one hundred years ago.

The second and related limitation of the book is Acs’s understanding of philanthropy. Acs goes to great lengths to distinguish philanthropy from charity. “Philanthropy” is “an investment that stimulates other investments,” whereas “charity” is separate activity that “requires no such reciprocal relationship” (p. 4). That he acknowledges no reciprocity in charity is problematic ab initio. His narrow understanding of philanthropy is evident, for example, when he writes: “The motivations for giving all reflect overarching bourgeois, or middle-class, values, though three distinct themes emerge: wanting to make a difference in the lives of future generations; recognizing that luck and community play large roles in good fortunes, and therefore wanting to give back; and feeling that enormous wealth should not be left to family” (p. 126).

A deeper engagement with the literature on philanthropy, giving, and charity would have enriched Acs’s understanding and strengthened his argument. Furthermore, his definition of philanthropy is indebted to the “philanthrocapitalism” movement very much in vogue today, as practiced (not coincidentally) by Bill Gates. There are other traditions and histories of philanthropy that could fit within Acs’s larger story of the virtuous circle of capitalism and philanthropy, but that he fails to address or even acknowledge. “Philanthropy, as I argue in this book,” he writes, “is part of the implicit social contract that continuously nurtures and revitalizes a society” (p. 6). Society is nurtured and revitalized by giving and charity as well as by an expanded definition of philanthropy.

Perhaps the most irksome (to this reviewer) flaw in Acs’s book is his implicit claim to conceptualizing the distinction between the managerial and entrepreneurial economies and the shift from the former to the latter in the 1980s. Acs writes that “the major changes moved in the direction of large industrial processes and an attitude that, among firms, bigger is better, a period I refer to [emphasis mine] as the managerial [emphasis in the original] economy, which lasted through the 1970s” (p. 47). In fact, it was Peter Drucker thirty years earlier in Innovation and Entrepreneurship: Practice and Principles (New York: HarperBusiness, 1985) who made that extremely useful distinction. (It should be noted that Acs does eventually mention Drucker in this context when he writes that in 1985 Drucker asked whether the emergence of the entrepreneurial economy will remain “purely an American phenomenon” [qtd. on p. 192]. But, nearly 150 pages after Acs’s first reference to the managerial/entrepreneurial economies, this acknowledgment is far too little and far too late.) If Acs had referred to Drucker’s book, he might havealso been reminded of one of the more profound insights into comprehending the whole entrepreneurship movement. Drucker wrote in his introduction that the shift from a managerial economy to an entrepreneurial one is “as much a cultural and psychological as it is an economic or technological event” (Innovation and Entrepreneurship, p. 14). Much like the inclusion of giving, charity, and an expanded definition of philanthropy in Acs’s analysis, this insight would have also enriched and deepened his story of the virtuous circle of capitalism and philanthropy in America.