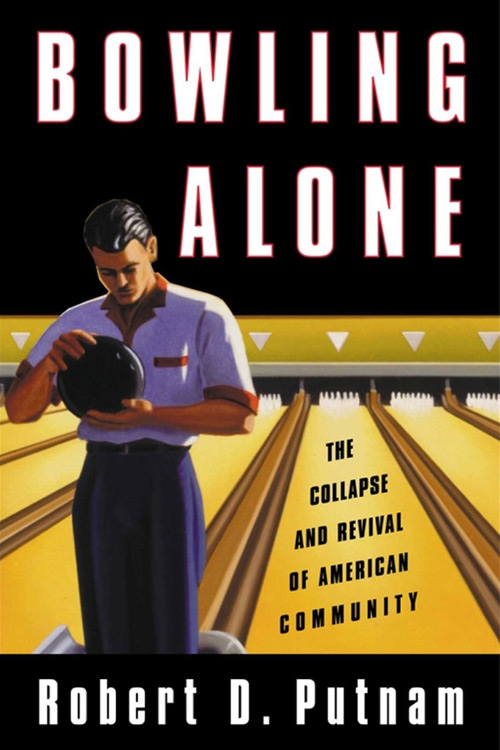 Robert Putnam’s 1995 essay on civic disengagement in the United States (“Bowling Alone: America’s Declining Social Capital,” Journal of Democracy 6 [January 1995]: 65–78) piqued the interest of conservatives and neoliberals alike en route to becoming perhaps the most discussed social science article of the twentieth century. Conservatives read Putnam’s essay as a demonstration of the crowding out of private civic and humanitarian organizations by the rising tide of government social programs. Neoliberals, in contrast, saw an opportunity to advance public welfare by using government to promote programs geared toward rebuilding the social-capital infrastructure in the United States, which Putnam argued had depreciated during the last third of the twentieth century.

Conservatives are unlikely to be persuaded by the data and arguments Putnam has marshaled in this book-length version of the essay, Bowling Alone: The Collapse and Revival of American Community. Neoliberals, on the other hand, will find reasons to rejoice, not only because of the book’s new material and policy prescriptions but also because attempts to meet the challenges Putnam has posed would revitalize the flagging communitarian social program. Whether or not scholars and policy analysts accept Putnam’s analysis and conclusions, they must be prepared to deal with the points Putnam has raised because his book promises to have cachet in policy circles for a long time.

The book’s central theme is simply stated: “For the first two-thirds of the twentieth century a powerful tide bore Americans into ever deeper engagement in the life of their communities, but a few decades ago—silently, without warning—that tide reversed and we were overtaken by a treacherous rip current. Without at first noticing, we have been pulled apart from one another and from our communities over the last third of the century” (p. 27). The ebb and flow to which Putnam alludes pertains to the shifting dimensions of “social capital,” which he clarifies as follows:

Putnam concludes that “social capital is a cause, not merely an effect, of contemporary social circumstances [i.e., social malaise]” (p. 294, emphasis in original).

The book is organized in four major sections. In the first, Putnam describes trends in civic disengagement that he claims have dissipated social capital in recent years. “[T]he broad picture is one of declining membership in community organizations. During the last third of the twentieth century formal membership in organizations in general has edged downward by perhaps 10–20 percent. Most important, active involvement in clubs and other voluntary associations has collapsed at an astonishing rate, more than halving most indexes of participation within barely a few decades” (p. 63).

In the book’s second section, Putnam identifies the perceived causes of this deterioration—causes that he argues have left “Americans today feel[ing] vaguely and uncomfortably disconnected,” a conclusion based in part on social surveys showing that “we wish to live in a more civil, more trustworthy, more collectively caring community” (p. 402).

One cause of the deterioration is said to be Americans’ love affair with television entertainment, which Putnam claims “is not merely a significant predictor of civic disengagement... . It is the single most consistent predictor that I have discovered” (p. 231, emphasis in original). A second “single most important cause of our current plight is a pervasive and continuing generational decline in almost all forms of civic engagement” (p. 404). “In speculating about explanations for this sharp generational discontinuity,” Putnam is “led to the conclusion that the dynamics of civic engagement in the last several decades have been shaped in part by social habits and values influenced in turn by the great mid-century global cataclysm” (p. 294). He identifies this cataclysm collectively as the Great Depression and Second World War. (The closely related and, according to many scholars, equally devastating consequences of New Deal policies and their pervasive aftermath are not similarly characterized as cataclysmic.)1 The two remaining causes of civic disengagement and declining social capital, according to Putnam, are the pressures of time and money along with mobility and sprawl. Putnam aligns himself with Walter Lippmann’s view that “we have changed our environment more quickly than we know how to change ourselves” (p. 402).

In the book’s third section, Putnam identifies the negative consequences of America’s declining social capital for education and children’s welfare, safe and productive neighborhoods, economic prosperity, health and happiness, and democracy. He admits that too much and the wrong kind of social capital also can have deleterious consequences—“too much fraternity is bad for liberty and equality” (p. 351), leading, for example, to an increase of organized crime—but he believes that on balance the benefits of copious social capital broadly outweigh those costs.

Putnam concludes the book by recounting the social movements that characterized the Gilded Age and the Progressive Era—political epochs that gave rise to the stock of social capital that Putnam argues dissipated during the last third of the twentieth century. His concluding message is that “we desperately need an era of civic inventiveness to create a renewed set of institutions and channels for a reinvigorated social life that will fit the way we have come to live... . We need to be as ready to experiment as the Progressives” (p. 401). We need, for example, “to rethink how to reward firms that act ‘responsibly’ toward their employees’ family and community commitments and how to encourage other employers to follow their example” (p. 406). To this end, Putnam poses some broad challenges for the United States in the twenty-first century:

Let us act to ensure that by 2010 Americans will spend less time traveling and more time connecting with our neighbors than we do today, that we will live in more integrated and pedestrian-friendly areas, and that the design of our communities and the availability of public space will encourage more casual socializing with friends and neighbors. (p. 408, footnote omitted)

...Let us act to ensure that by 2010 Americans will participate in (not merely consume or “appreciate”) cultural activities from group dancing to songfests to community theater to rap festivals. Let us discover new ways to use the arts as vehicles for convening diverse groups of fellow citizens. (p. 411)

Putnam acknowledges that the realization of this utopian social vision cannot be left to individual action based on private self-interest, not only because self-interest is failing to produce the desired result but also because problems of externalities and collective action require Pigouvian taxes, moral suasion, and other forms of government action: “Government may be responsible for some small portion of the declines in social capital I have traced in this volume [the crowding-out problem that conservative thinkers have identified], and it cannot be the sole solution, but it is hard to imagine that we can meet the challenges I have set for America in 2010 without using government” (p. 413). Putnam believes that “we should do [these things] not, ironically, because it will be good for America—though it will be—but because it will be good for us” (p. 414).

The book, however, offers no systematic demonstration that the benefits of its utopian agenda would outweigh the costs of “using government” to bring it into being. Any attempt to establish that conclusion almost certainly would fail: universal happiness and well-being have yet to flow from utopian social policies. The fact that private and public life presents a series of trade-offs fully escapes Putnam’s purview: his policy prescription has superficial appeal (to the extent that it appeals at all) because he almost entirely ignores the costs of bringing it about. Consequently, no offhand proposal is too outlandish. For example, “why not [require] employer-provided space and time for civic discussion groups and service clubs?” (p. 407). The correct answer to questions of this sort is widely known, though not frequently acknowledged: because the market process resolves such issues in toto far more efficiently than does legislative fiat.

Putnam fails to recognize the inconsistencies and contradictions inherent in his analysis and policy prescriptions. He proposes an enormous extension of social control over the lives of private individuals, which, if undertaken, would bring about massive growth of government bureaucracy and statutory law. From that growth would unavoidably arise increases of coercion, taxation, fraud, and abuses of state power—increases that have accompanied every extension of social control since the New Deal. Yet Putnam expresses bewilderment at the explosive growth in the number of lawyers and the correlative decrease of trust that similar social programs have produced during the past thirty years (p. 146).

In an earlier work on the civic traditions of modern Italy (Making Democracy Work: Civic Traditions in Modern Italy [Princeton: Princeton University Press, 1993]), Putnam noted a correlation between civic participation and “good government,” from which he hypothesized that “membership in horizontally ordered groups (like sports clubs, cooperatives, mutual aid societies, cultural associations, and voluntary unions) should be positively associated with good government.” Conversely, “membership rates in hierarchically ordered organizations (like the Mafia or the institutional Catholic Church) should be negatively associated with good government” (p. 175). Government itself, however, is a hierarchical organization, indistinguishable in many respects from organized crime. Putnam thus hypothesized (correctly) that reliance on government for civic virtue (strengthened political ties) is deleterious to good government, whereas cooperative social activities (strengthened social ties) are conducive to it. That hypothesis is broadly and consistently supported by work in Public Choice,2 and it flatly contradicts the premises underlying Putnam’s present support of utopian social arrangements brought about through state action.

Economic theory teaches that individuals seek to maximize the expected utility they can derive from their environment. “Social organization” is merely a composite view of individuals interacting in ways that enhance their separate private utilities. Coercing individuals to live and interact differently through the compulsions of law, as Putnam proposes, cannot increase aggregate social welfare; doing so would merely move most individuals away from their revealed optima while increasing the far-reaching disutility that is an unavoidable cost of coercive public policy. Putnam’s proposals ultimately rest on the weakest and most potentially dangerous implication of the Standard Social Science Model:3 that an omnipotent state pursuing normative policy ends can and indeed ought to treat individuals like sheep.

James A. Montanye
Falls Church, Virginia
Culture and SocietyEntertainmentFamilyPhilosophy and ReligionSocialism, Communism, and Collectivism
Subscribe Buy This Issue Get the App