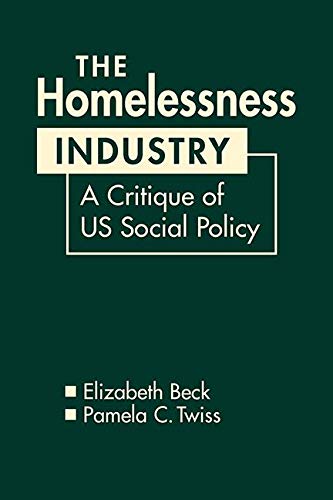 The Homelessness Industry
A Critique of U.S. Social Policy
Elizabeth Beck and Pamela C. Twiss
Hardcover
This book review is a web exclusive for the Fall 2019 issue of The Independent Review.

Elizabeth Beck and Pamela Twiss recount the history of modern homelessness in the United States, focusing on major policy changes from roughly 1980 to the present. They follow the ebbs and flows of policy attention for the homelessness issue, emphasizing the interplay of advocacy groups, academic experts, the media, and policymakers. The book can be broken into four general periods: the emergence of federal homelessness policy from 1980 to 1987 (chapters 3–5); the early implementation of this policy from 1987 through 1993 (chapters 6–7); the slow shift toward policy reform in 2009 (chapter 8); and the post-financial crisis period, up to the present (chapters 8–9).

Drawing on government reports, secondary research, and firsthand accounts, the authors present a narrative that, to them, yields but one conclusion: homelessness in the United States is the result of free markets and “neoliberal” public policy. Beck and Twiss make this conclusion clear from the outset. Whereas scholars typically use the term “the homelessness industry” to describe the public and nonprofit organizations providing shelter and services to the homeless (e.g., David S. Lucas and Caleb S. Fuller. 2018. “Bounties, Grants, and Market-Making Entrepreneurship.” Independent Review 22, no. 4: 507–528), Beck and Twiss adapt the expression to reflect their position: “We use the term homelessness industry to represent the production system in which neoliberal policies continuously generate new homeless people, as much as a factory churns out widgets, and support the industry of social services and criminal justice facilities receiving them” (p. 1, emphasis original).

Throughout the book, the authors impugn a laundry-list of individuals and groups who have contributed to the homelessness “production system,” including the Reagan administration, the Mont Pelerin Society (explicitly naming Milton Friedman, Ludwig von Mises, F. A. Hayek, and Charles Murray, among others), academic psychiatrists, homeless shelter organizations, the criminal justice system, and now the Trump administration. While only some of these actors had a direct hand in homelessness policy, Beck and Twiss see each of them as making distinct contributions to the nation’s failure to end homelessness. Nearly the only actors who are exonerated in the authors’ view are the advocacy groups that have protested and lobbied for increases to federal homelessness funding and the politicians who shared this goal. Beck and Twiss call for a human rights framework to homelessness that would bring major increases in public housing and housing vouchers, a higher minimum wage, and a legal right to housing.

As the above language suggests, the authors explicitly reject the role of individual agency in homelessness, exclusively blaming what they call “structural” causes. In fact, a recurrent theme throughout the book is that the view of homelessness as a result of individual “pathology” or personal decisions has guided homelessness policy in ways that hinder its effectiveness. No precise definition is offered to clarify the authors’ meaning of “structural,” however. The factors sporadically mentioned as structural are quite broad, including “neoliberal policies,” laissez faire ideas, deindustrialization, automation, racism, globalization, criminalization, and persistently insufficient government redistribution for the homeless.

The authors’ thesis that market-friendly policies are the key cause of homelessness is not particularly compelling. For one, the causal mechanisms by which market-based policy “produces” homeless people like “widgets” are not clearly specified. Presumably, the “secret formula” is some combination of a housing market that cannot provide sufficient low-income housing and a labor market that provides a dearth of jobs and inadequate wages for low-skilled workers.

As for the housing market, some of the biggest limiting factors on the elasticity of supply of affordable housing are not “free market” in nature but rather emerge from local zoning laws and land use regulations. When binding restrictions on residential properties increase (e.g., from minimum water heater tank sizes to minimum lot sizes), the profitability of supplying lower-cost housing units diminishes. Rather than the result of free markets, insufficient affordable housing is exacerbated where restrictions stifle entrepreneurs’ ability to provide it. Indeed, the relationship between housing regulation and homelessness is affirmed in a number of studies (e.g., Steven Raphael, “Homelessness and Housing Market Regulation,” in Ingrid Gould Ellen and Brendan O’Flaherty, eds. How to House the Homeless. New York: Russell Sage, 110–140). Similarly, the call for an increased minimum wage is unlikely to resolve employment concerns.

Despite its tenuous conclusions, the book has a number of strengths—especially in the historical details surrounding the emergence of federal homelessness policy. Indeed, perhaps the most fascinating section involves the leadup to the major federal homelessness legislation, the 1987 Stewart B. McKinney Act. Beck and Twiss focus largely on the efforts of advocacy groups to gain popular and political support for a federally-led response to homelessness. They highlight the role of three key advocacy organizations (and key individuals within them) that spearheaded change on legislative, judicial, and social fronts simultaneously.

The Community for Creative Non-violence, or CCNV (of which Beck was a member), engaged in a number of dramatic demonstrations, with members like famous advocate Mitch Snyder fasting to the point of near-death on numerous occasions. The National Coalition for the Homeless was led by lawyers bringing suit against New York City and other governments to seek increased public provision for the homeless. The National Union for the Homeless, comprised of many previously (or presently) homeless individuals, also did much to increase public awareness of the issue.

Beck and Twiss also insightfully argue that the framing of homelessness significantly influenced both the early success of advocates’ efforts—and, ultimately, the limited impact of those efforts. An intriguing aspect of the narrative is the role of academic experts in championing, but also changing, the homeless issue. In particular, psychiatry researchers did much to validate the importance of homelessness. However, they also presented it as a “medical issue” requiring individual rehabilitation, whereas the advocates shared Beck and Twiss’ emphasis on “structural” causes. This had important implications for the 1987 legislation, which included extensive resources for services and case management, and largely limited housing support to short-term emergency shelter and transitional housing. Thus, an unintended consequence of this approach was to essentially entrench the nonprofits and social service organizations providing short-term relief and rehabilitation to the homeless. Not unlike the revamping of federal homelessness policy in 2009, the emergence of this policy in the 1980’s can be understood as a process of public entrepreneurship involving an entangled web of public and private actors (e.g., David S. Lucas. 2018. “Evidence-Based Policy as Public Entrepreneurship.” Public Management Review 20, no. 11: 1602–1622).

The authors also recount the unwillingness of the conservative executive branch to follow through on the provisions in the 1987 McKinney Act, pointing to an ongoing process of advocacy and pressure both within and outside government. Beck and Twiss then go on to present the rise of Housing First, an approach to homeless services rooted in permanent supportive housing. Despite some misgivings, the authors see this as a solution that, if invested in sufficiently and implemented broadly, could bring an end to the entangled homeless shelter and criminal justice systems that the long-term homeless often alternate between (pp. 236–239). They do not mention the available empirical evidence on this prediction—which, unfortunately, presents a less promising outlook for this solution (e.g., Kevin Corinth. 2017. The Impact of Permanent Supportive Housing on Homeless Populations. Journal of Housing Economics 35, 69–84). The authors conclude with worries that the Trump administration will slash funding for such efforts (despite citing evidence to the contrary; the federal targeted homelessness assistance budget increased consistently in 2016, 2017, and 2018—see United States Interagency Council on Homelessness, 2018. “U.S. Targeted Homelessness Assistance,”; accessed 5/29/19).

Economists interested in homelessness would stand to gain from reading this book. For one, researchers would be remiss to overlook its historical information. While numerous studies overview the policy events that have unfolded since the 1980’s (e.g., Martha M. Burt, 1992. Over the Edge: The Growth of Homelessness in the 1980s. Russell Sage Foundation; and David S. Lucas. 2018. ibid.), Beck and Twiss offer something closer to an “inside look” at these events—especially the development of the 1987 Stewart B. McKinney Act. Through interviews with and archival material from the leading homeless advocates of the period, they provide rich details about a number of key individuals in and out of government. The authors’ firsthand involvement in these advocacy efforts is an added plus; the book features short vignettes of Beck’s personal experiences while working with CCNV.

More generally, it is important to understand the position of both scholars and practitioners who truly care about the plight of those experiencing homelessness—as the authors clearly do. The interdisciplinary scholarly literature on homelessness features a variety of (mis)perceptions about the relationship between the free market system and homelessness. These misperceptions are evident in the authors’ surprise that “[o]ddly enough ... classical economic liberals presented themselves as champions of the poor” (p. 32).

Should it be so hard to believe that classical liberalism is the friend of the downtrodden? The fact that compassion is so readily viewed as inconsistent with this framework suggests the need for new champions of the relationship between the entrepreneurial market process and the plight of the poor and homeless. Of course, many have noted the dramatic, long-term alleviation of poverty that makes the trend of global income appear like a “hockey stick of human history;” still others have stressed the related fact that the share of the human population in extreme poverty has plummeted. But these data likely will not overthrow the persistent (and not-uncommon) belief held by many that the market process inevitably leaves the neediest individuals behind. For this, a focused and rigorous research agenda is needed on specific, private-based solutions to major social challenges—especially in the context of developed countries that already enjoy the proliferation of market exchange.

Scholars in the classical liberal tradition can add much to the academic conversation on homelessness—and social policy more generally—by again becoming champions of the poor and the homeless. This could involve a rich variety of research topics, including the (in)consistencies between means and ends in homelessness policy, the role of special interests in regulation and zoning rules that limit the affordable housing supply, and the role of entrepreneurs and civil society in empowering and assisting those in greatest need.