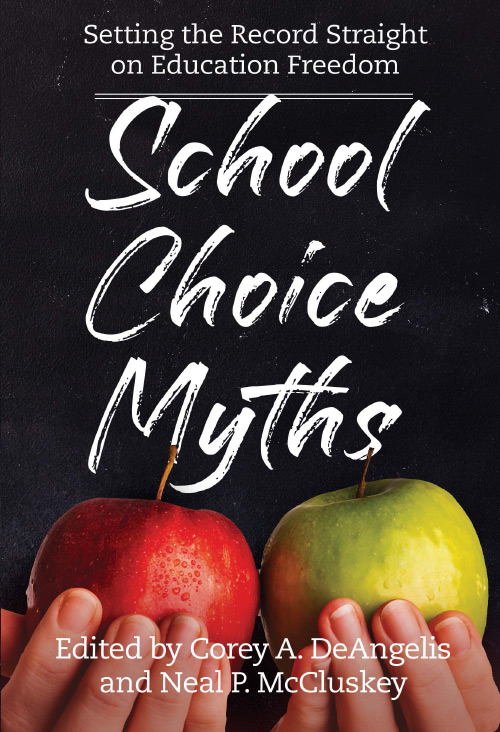 School Choice Myths
Setting the Record Straight on Education Freedom
Edited by Corey A. DeAngelis and Neal P. McCluskey
Kindle Hardcover
This book review is a web exclusive for the Summer 2021 issue of The Independent Review.

Obviously, just as a book from the National Education Association or the American School Boards Association will castigate school choice, a book published by the Cato Institute will lionize it. School Choice Myths, edited by Corey A. DeAngelis and Neal P. McCluskey, thus has few surprises. That said, the book summarizes sound research offering reasoned rebuttals of some of the more notable criticisms of choice. School Choice Myths is that rarest of edited volumes, a readable, accurate summary of social science. Accordingly, the book could work well for undergraduate or masters students in education policy, as well as for general readers.

The first of eleven myths busted charges that school choice balkanizes society. As co-editor McCluskey writes, one might in fact argue that the public schools serving roughly 90% of American students balkanize society. On the other hand, one might counterargue that current divisions could be worse. McCluskey makes a strong case that public schools have more often sought to make students uniform than unified, imposing elite values. Public schools marginalized Catholics in the 1800s and early 1900s and African Americans through history. McCluskey tartly observes that one cannot see public schools as unifying, “except perhaps in the sense that unifying is conquering” (p. 10). Regarding integration, though education professors largely avoid the topic for fear of what they might find, such research as exists indicates that compared to public schools, private religious schools better unite students across racial lines, likely since they more often satisfy preconditions psychologists posit as necessary to overcome prejudice: equal status, common goals, supportive leadership, and identities transcending race.

Notably, in the mid and late 1800s dozens of localities funded Catholic and other private schools so long as they taught allegiance to the nation, sensible political compromises defusing religious conflict through parental choice. Anti-Catholic bigotry put a stop to this in the late 1800s, as I detail in the National Review (“School Choice and the Value of Religious Diversity,” August 9 2020).

Fortunately, as Tim Keller shows in chapter 4, considerable jurisprudence including the recent Espinoza v. Montana decision has established that, as Supreme Court Chief Justice John Roberts wrote, religious people “are members of the community too, and their exclusion from [choice programs] is odious to our Constitution and cannot stand.”

Two chapters tackle whether markets or monopolies educate better. In chapter 5, co-editor DeAngelis debunks arguments that markets cannot provide education since “children are not widgets” to be processed. In practice, monopolistic bureaucracies are more likely than markets to standardize schooling in ways failing to serve diverse children. Moreover, education does not fit the economic criteria of a public good since it has no free-rider problem. Education’s very importance means markets must provide it. As experiences in countries as diverse as Maoist China and contemporary Venezuela show, when government monopolies provide food children starve; likewise, when they provide education “children are starved of learning” (p. 76). Similarly, regarding special needs children, in chapter 11 Inez Stepman sees a deep misalignment between “students who are in desperate need of flexibility, multiple options, and personal evaluations, and a system that is set up to provide none of those things” (p. 163). Stepman argues that students are better served by new private options and the 23 Education Savings Accounts (ESAs) for special needs students in 14 states.

Two chapters examine the design of choice programs. In chapter 9, Lindsey Burke and Jason Bedrick distinguish libertarian and “equalitarian” approaches to school choice, with the latter seeking regulation to foster equity. Discussing various studies including one of the few with negative findings, that of the Louisiana Scholarship Program, they argue that excessive regulation deters good private schools from entering markets. Further, central planning through regulating rarely helps students. In chapter 10, John Merrifield paints regulated school choice as comparable to no choice at all. Regulation renders all choices alike, negating the inherent benefits of markets. Likewise, if great schools receive no additional resources or incentives to grow, they will remain rare. While rational, these arguments may make the perfect the enemy of the good, underestimating the benefits of regulated choice using faith-based (and therefore less materialist) schools in countries like Belgium and the Netherlands. This theme is developed in a book I co-edited with M. Danish Shakeel, Educating Believers: Religion and School Choice (New York: Routledge, 2020).

School Choice Myths makes a persuasive, readable argument, but would have benefitted from a devil’s advocate or two. After all, given the dominant impacts of parents on children, perhaps even unconstrained choice would yield evolutionary rather than revolutionary improvements. Further, as noted, foreign experiences suggest regulated choice can work. As E.D. Hirsch argues, until it began copying the U.S., French experience suggested benefits from standardizing curricula, if not schooling generally. School Choice Myths should have addressed the key role of teacher entrepreneurs and teacher quality in schools: more choice and less regulation may empower good teachers to lead schools. Finally, while existing programs do more good than harm, the authors should acknowledge the possibility of diminishing returns as school choice expands. If the failures of central planning teach anything, they should advise modesty about reforms, even reforms empowering parents. We have difficulty predicting complex social phenomena.

Yet these are minor flaws in a fine, readable book. School Choice Myths should have a place on any education scholar’s bookshelf next to its more technical and scholarly counterpart, contributor Patrick Wolf’s edited School Choice: Separating Fact from Fiction (New York: Routledge, 2019).