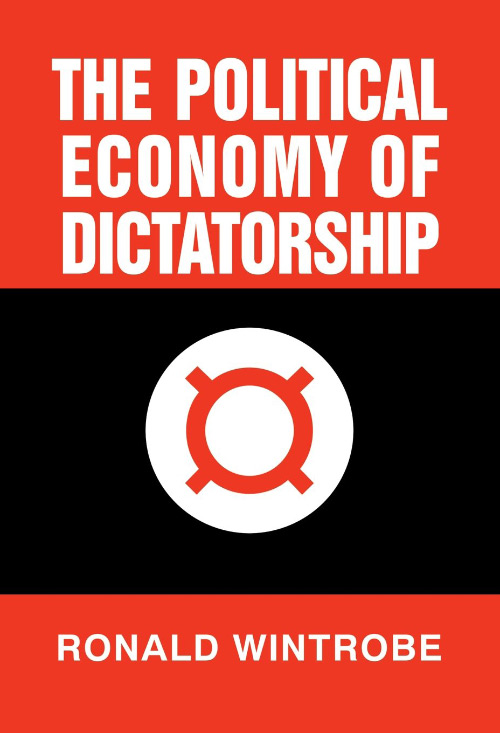 The Political Economy of Dictatorship
Ronald Wintrobe
Hardcover Paperback
This book review appeared in the Winter 1998/99 issue of The Independent Review.

It is much safer for an academic to write a flawless work on a picayune topic than to explore an interesting topic and make some mistakes along the way. In The Political Economy of Dictatorship, Ronald Wintrobe takes the latter, riskier route. Using an unabashedly economistic approach, he tries to explain how dictators stay in power, how political repression and economic performance interact, the nature of democratic inaction and nationalism, and how bureaucracies function.

Wintrobe begins with a formal model of autocracy, which specifies that dictators maximize a weighted average of power and personal consumption. At the poles, a dictator may be a pure power-maximizer (a “totalitarian”) or a pure personal-consumption maximizer (a “tinpot”). Whatever their preferences, dictators must divide their resources between repressing opponents and rewarding loyal followers. That decision looks like a standard intermediate-microeconomics problem, but several factors complicate the analysis, especially imperfect information (a dictator’s ability to repress opponents leads most of them to pose as supporters) and imperfect enforcement (neither the dictator, nor his loyalists, nor the general public can readily trust each other’s promises).

Noneconomists will probably consider Wintrobe’s formal model of the utility-maximizing dictator to be a long walk for a short drink. But his emphasis on imperfect information and imperfect enforcement is more fruitful. In democracies, explains Wintrobe, people can express their preferences without fear of punishment, and they can retaliate at the ballot box against leaders who break their promises. These responses are hardly perfect solutions to the information and enforcement problems, but in dictatorships the situation is worse: people are often too afraid to say what they actually believe, and there is no easy way to punish a dictator who violates his pledges.

Dictators therefore place more emphasis on building networks of loyalty to compensate for the weakness of democratic enforcement mechanisms; they also tend to lash out at bonds of loyalty that allow other members of society to enforce agreements potentially at odds with the dictator’s wishes. Thus, according to Wintrobe,

Stalin may have been extraordinarily ruthless, but he was not irrational if we look at the effects of the terror from his point of view. . . . He transformed the CPSU, especially its upper echelons, from an organization dominated mainly by Old Bolsheviks whose loyalties were primarily to the CPSU itself (or to each other) into an elite which was entirely of Stalin’s own making. (p. 227)

Dictators create loyalty the same way firms do: by paying “efficiency wages“wages in excess of a person’s opportunity cost. Wage premiums obviously give a dictator’s supporters an extra benefit, but that benefit can be withdrawn for disloyalty. In fact, in a dictatorship, efficiency wages are more effective because “the individual typically has fewer opportunities outside the system controlled by the government than an individual who is outside a capitalist firm in a market system” (p. 141).

For both theoretical insight and concrete applications, Wintrobe’s book is well worth reading. But it has two main problems that leave plenty of room for further research and, at the same time, may mistakenly confirm noneconomists’ impression that “economic imperialism” has gone too far.

The chief analytical problem is that Wintrobe, like most political economists, has not fully absorbed “the logic of collective action” that Mancur Olson made famous: Most people have no pecuniary incentive to aid causes or leaders that will benefit them, or to struggle against their oppressors. A few activists can look forward to wealth and power in exchange for their loyal service to a political cause; but for the most part, a change in policy or regime is a public good that apathetic bystanders can enjoy as much as dissidents who risk their lives. Consider this simple example from Wintrobe:

Suppose, for example, that a politician obtains a dam or bridge or other pork-barrel project for the citizens in his or her district. A proper cost-benefit analysis will reveal that the project is wasteful. Indeed, if the project is not wasteful, citizens have no reason to give their support to that politician in exchange for the dam or bridge, because the politician is making no sacrifice on their behalf but is simply doing what any technocrat would do. (p. 31, emphasis added)

Strictly speaking, however, because the pork-barrel project is a collective good vis-à-vis the citizens of the district, most individuals never have a (self-interested, economic) reason to give their support in “exchange” for anything. If supporters and nonsupporters alike enjoy the same benefits, the incentive to be a supporter rather than nonsupporter is nil. Wintrobe’s description of the facts is probably empirically accurate: a politician who funnels millions of pork dollars to his district is likely to be popular. But those facts constitute a puzzle fornot a routine implication ofeconomic theory.

The puzzle does have a solution; one excellent formulation appears in Geoffrey Brennan and Loren E. Lomasky’s Democracy and Decision: The Pure Theory of Electoral Preference (Cambridge: Cambridge University Press, 1993). As Brennan and Lomasky explain, the logic of collective action does not kill politics, because expressive rather than instrumental tastes are the main motive for political action and opinion. Risking your life for your beliefs is usually a very foolish way to get rich, but it is a perfectly rational way to stand up for what you believe is right. An important implication is that, in politics, expressive concerns matter a lot more than they do for private decisions. The widespread view of noneconomists that politics is in some sense “irrational” is not only consistent with economic theory but is in fact one of its most illuminating implications.

Brennan and Lomasky focus on democratic decision making, but their analysis almost surely has fascinating implications for dictatorship, too. Although Wintrobe may be right that instrumental concerns play some role in dictators’ propaganda, ideology, nationalism, and extermination of scapegoats, Brennan and Lomasky’s analysis is both more powerful and more consonant with common sense. In Wintrobe’s discussion of nationalism and genocide, even he recoils from an explanation in terms of rational economic self-interest: “The ethnic group which is the object of conscious hatred is, to an outside observer, obviously not the real enemy. Indeed, this is one reason why acts of hatred and destruction toward the conscious enemy are inherently unsatisfying and result only in frustration, thus breeding further hatred and violence” (p. 296). Wintrobe’s book would have been better if he had seen that irrational ethnic hatred is not an isolated anomaly but a symptom of the disproportionate role of expressive preferences in politics.

The other main problem in Wintrobe’s work is his occasionally idiosyncratic interpretation of historical fact. He cites Chile under Pinochet as an “obvious case” of a “very repressive” (p. 12) regime, even though modern estimates of the number of Pinochet’s victims are between two and three thousand. He claims that “the increase in income in China has resulted in not the slightest relaxation of repression there after almost two decades of reform and spectacular growth” (p. 74). This judgment seems to overlook not only the well-known horrors of the Cultural Revolution, which Mao’s successors sharply curtailed, but Mao’s earlier, less publicized but far worse atrocities, especially those associated with the Great Leap Forward (see Zhengyuan Fu, Autocratic Tradition and Chinese Politics [Cambridge: Cambridge University Press, 1993], and Jasper Becker, Hungry Ghosts [New York: Free Press, 1996]). Wintrobe also argues that the history of the Soviet Union confirms his model’s prediction that totalitarian regimes relax oppression as economic conditions worsen, an argument that at best confuses the level of economic prosperity with its rate of growth.

In spite of any problems, The Political Economy of Dictatorship is well written, engaging, and filled with fascinating examples and astute observations. Wintrobe belongs to a growing contingent of contemporary thinkers, including Timur Kuran, Tyler Cowen, Donald Wittman, Geoffrey Brennan, and Loren Lomasky, who apply rigorous economicswritten in plain Englishto broad, substantive questions. Although Wintrobe’s book leaves many questions unanswered, it is a significant contribution that both academics and laymen will enjoy.