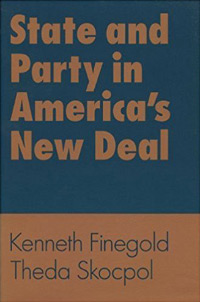 State and Party in America’s New Deal
Kenneth Finegold and Theda Skocpol
Hardcover Paperback
This book review appeared in the Fall 1996 issue of The Independent Review.

On my graduate school field exam in economic history, I was asked whether the New Deal was a watershed for the twentieth-century American economy. I suspect my professors were looking for an answer having to do with macro-economic policies and the growth of government. Instead, I answered that the New Deal had been a watershed because its dramatic expansion of the national government created for the first time a group of trained and professional government employees who could (and did) contemplate and manage a greatly expanded role for the government in the economy. In this book, Kenneth Finegold and Theda Skocpol take a similar tack. They interpret the success or failure of major New Deal programs as hinging on the government’s administrative or “state” capacity to implement the programs.

One of the major puzzles of New Deal history is why, after 1935, the government abandoned the policy approach embodied in the National Recovery Administration (NRA) while persisting in reform and recovery efforts in other areas, including agricultural price supports and production controls, unemployment relief, social welfare, and public works, even in the face of considerable political and judicial opposition. Finegold and Skocpol frame a solution by comparing the failure of the NRA and the success of the Agricultural Adjustment Administration (AAA). A group of well-trained, competent, experienced professionals was available to implement the agricultural policies, whereas no comparable group was available to implement the NRA’s policies. In addition, Finegold and Skocpol explain some details of New Deal agricultural and industrial policies by relating them to the internal structure of the Democratic Party. Hence the “state and party” of the book’s title.

The argument about state capacity is compelling. Government support of agriculture certainly is the best example of how academic experts (in this case, agricultural economists), private-sector beneficiaries, and government administrators can form an effective coalition to achieve their own objectives at the expense of the general public. The only other equally successful coalition of this sort that comes to mind is the military-industrial complex, which has an altogether different composition and rationale.

Potential readers should be alerted, however, that the NRA and the AAA are only minor players in the book. The main subject is political theory. Finegold and Skocpol seek to show that their theory of state capacity and party alignments is superior to all other major (and many minor) theories, from rational choice to Marxism, that attempt to explain government behavior. Their mastery of the huge pertinent literature is impressive and the density of their references overwhelming. Roughly half the book is dedicated to developing their theory and comparing their approach to those of pluralists, elite theorists, Marxists, and rational choice theorists. If you delight in such comparisons, this is the book for you.

The extended attention to theories, however, comes at considerable cost: the authors pay too little attention to the New Deal programs themselves. The AAA is conveniently categorized as a production control program, even though Finegold and Skocpol are aware that supporting prices by means of demand enhancement was an alternative option pursued for certain commodities throughout the New Deal period. Given that most farmers favored higher prices but opposed production controls, Finegold and Skocpol’s theory gets a high mark for explaining something that alternative theories cannot easily explain, namely, that the AAA did implement a number of production controls. Nonetheless, the authors’ characterization of New Deal agricultural policy as primarily production control is a mistake–oddly, one they seem to be aware of even as they make it.

Finegold and Skocpol explain the origin of the National Industrial Recovery Act (NIRA) as simply the New Deal’s hurried reaction to Senator Hugo Black’s proposed legislation to limit the work week. Poorly crafted and administratively underpowered, the NIRA was doomed to fail. From its ashes, of course, rose the Wagner Act, the National Labor Relations Board, and a reinvigorated labor movement that became an integral part of the Democratic coalition. That a program begun to advance the interests of capitalists turned into one to advance the interests of organized labor is another paradox that Finegold and Skocpol’s theory can explain better than alternative theories.

Economists call the sort of big-picture events the authors seek to explain “stylized facts.” Although stylized facts sometimes serve a useful purpose, more often they are pernicious in their effect on analysis. No doubt Finegold and Skocpol would agree that the kind of historical institutionalism they promote ought to be grounded in nothing less than a detailed examination of the historical record with all its peculiarities and inconsistencies. Most likely, their preoccupation with political theories and the extensive effort they devote to that part of their study account for their flattened portrayal of the New Deal programs.