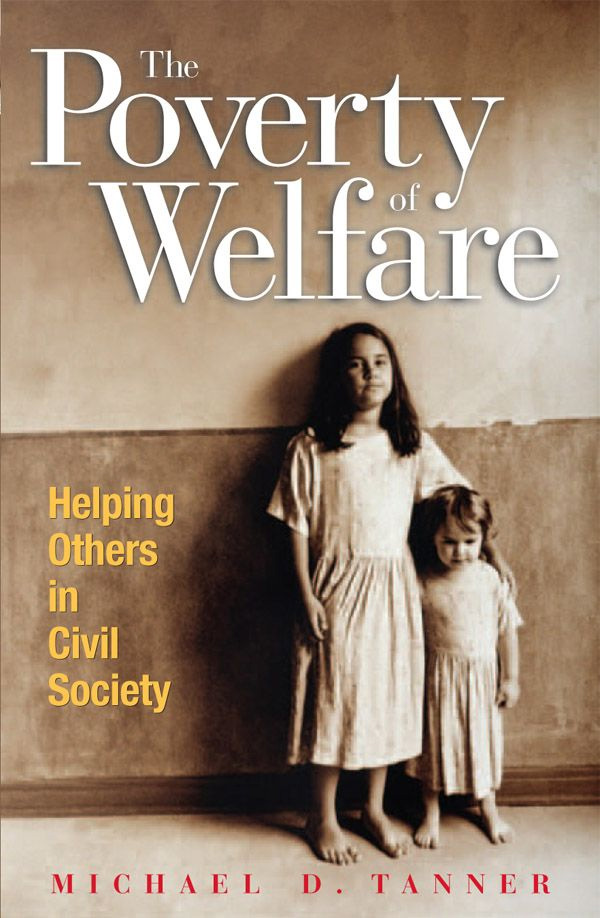 The Poverty of Welfare
Helping Others in Civil Society
Michael Tanner
Kindle Paperback
This book review appeared in the Fall 2004 issue of The Independent Review.

Michael Tanner’s new book The Poverty of Welfare does not cover much new ground, but nonetheless it provides a useful summary of welfare policy—past, present, and prospective. It is eminently readable, brief but thorough, and realistic about the degree to which public welfare and private charity have been effective in the past. Thus, the book should be a welcome addition to the bookshelves of those who are interested in trying to help the poor.

Chapter 2 serves as an effective primer on the history of U.S. welfare and charity and on the evolution of both over time, including a discussion of outdoor relief, poorhouses, and fraternal organizations. Tanner closely follows Marvin Olasky’s The Tragedy of American Compassion (Washington, D.C.: Regnery, 1992) and David Beito’s From Mutual Aid to the Welfare State: Fraternal Societies and Social Services, 1890–1967 (Chapel Hill: University of North Carolina Press, 2000)—two indispensable books on this topic. He discusses the distinction that almost all aid givers made prior to the twentieth century between the “deserving” and the “undeserving” poor, as well as the aid givers’ use of what Olasky calls “categorization” and “discernment.” He also describes the late nineteenth century’s increasing faith in government’s ability to solve problems; the role of the Great Depression in fostering increasingly dominant federal efforts; the fact that Franklin Roosevelt’s famous work-relief projects faded while his relatively modest efforts to dispense cash burgeoned; the crucial roles played by Lyndon Johnson’s “War on Poverty” and the decline in social stigma against having babies out of wedlock and receiving welfare; and the dramatic increases in welfare funding under every president since Johnson (except under Reagan, who came closer to holding the line, allowing only a 15 percent increase over eight years).

Tanner concludes his overview of welfare history by pointing to the nearly universal dissatisfaction with welfare policy in the mid-1990s from, ironically, all parts of the political spectrum. Having presented the background for understanding why substantive reform was politically possible, Tanner then turns in chapters 3 and 4 to the changes in welfare policy under the Personal Responsibility and Work Opportunity Reconciliation Act of 1996 (PRWORA). He notes the increased emphasis on in-kind benefits, the expansion of the Earned Income Tax Credit (EITC), and the state-specific aspects of the federal reform, and he identifies what he considers to be the key policy improvements under PRWORA—the move from federal to state involvement through block grants and the termination of welfare payments as an entitlement—in making the transition from indiscriminate assistance to the imposition of conditions and restrictions on receipt of benefits.

Throughout the book, Tanner describes the consequences of welfare policy—and of the 1996 reform, in particular—on employment, out-of-wedlock births, long-term and intergenerational dependence, and so on. The new policy’s two most notable consequences have been smaller caseloads (but with greater spending per person) and a change in the most likely reason for leaving welfare (previously getting married, now finding a job). He notes that welfare caseloads fell by more than half, starting with the modest state-based reforms in the mid-1990s and then accelerating considerably in the wake of PRWORA. He argues, drawing on the literature, that the reforms were effective through some combination of reducing the attractiveness of welfare and increasing the attractiveness of employment (for example, through an expanded EITC and the availability of benefits attached to work, such as child care and health insurance for children). Moreover, improvements by state have varied predictably with the strength of state-chosen incentives. (All states were to impose time limits on receiving benefits, but the flexibility written into the use of the block-grant funds—including state-specific definitions of work that often include “looking” for work and receiving education or training—served to undermine the incentives to varying degrees.) All in all, Tanner concludes that the reform’s results were neither as good as its proponents had hoped nor nearly as bad as its opponents had feared.

My only criticism of Tanner’s effort arises here. Tanner notes that the poverty rate did not increase with reductions in welfare, but he omits a significant explanation. Because the official poverty rate is a function of the Census Bureau’s limited measure of income (limited, most notably in this context, in that it ignores in-kind transfers), the poverty rate is a more accurate measure of dependence on government than it is a measure of standards of living for the poor. Notice that the total resources available to the poor might have been little changed when they returned to work (more earned income but less government assistance), even as the official measurement of their (cash) income increased dramatically.

Besides performing the useful service of summarizing historical and contemporary facts about welfare and charity, Tanner contributes to the subject chiefly by making the case that welfare reform is an inherently limited enterprise. He argues that the 1996 reform’s impressive results are about the best that one reasonably can expect with government redistribution as the centerpiece in efforts to help the poor. One problem is practical. In brief, welfare reform succeeded as a form of picking the low-hanging fruit—those who were least likely to be on welfare in the long term anyway and those who were easiest to move off welfare. In contrast, the government’s record in dealing with seemingly intractable poverty is not nearly as good. The other problem is political. Given the passionate self-interests of welfare bureaucrats and the rational ignorance and consequent apathy of a public that can be aroused only when the costs of the status quo are large enough (as they had become by 1996), it is unlikely that politicians will have any incentive to embrace further substantive reform. Ironically, although welfare policy has been improved greatly, we are now back to the same basic policy debate: no one is especially satisfied, but new proposals require spending more money (albeit in different areas) and tinkering with an inherently flawed system. Especially with a Republican president and Congress in office, the debate over welfare is too easily marked by political gamesmanship—in contrast to Clinton’s ability to approach welfare as a “Nixon goes to China” moment.

Tanner does not say that welfare tinkering should be dismissed out of hand. He still advocates creating tighter work requirements and moving more control to state and especially local efforts. And he recommends giving the poor the ability to build independence through individual development accounts (IDAs)—a focus on developing wealth rather than on merely redistributing income—in contrast to the inherently brutal disincentives of means-based programs. Still, he argues that further reform of welfare as such cannot achieve the social goals that reasonable people have for the poor.

Tanner ultimately focuses on efforts within civil society as the best potential remedy for the problems of the poor. He notes the benefits of purely private efforts—from the philosophical superiority of voluntary action (as opposed to the coercion inherent in government activity) to the practical efficiencies of private-sector activity. Moreover, he argues that private charity can meet the (true) need, especially with the perception that government welfare efforts are diminishing and with fewer people being either poor or born into poverty. Still, he recognizes the possibility of transition problems and the need to adjust policy accordingly.

In reading Tanner’s book, I was struck by the rhetorical advantage inherent in his ability to sound “balanced” on this topic. Because he is not a proponent of welfare or of welfare reform, he does not “need” either one to work. As an incrementalist of sorts, his willingness to move gradually (as needed) to private efforts makes him seem more moderate. Likewise, Tanner echoes common themes for those who embrace the concept of limited government: the government’s lack of ability to help in practice (aside from promoting economic growth through effective institutions) and the desirability of having government remove artificial impediments to the poor’s escape from poverty. In fact, his chapter 7 is reminiscent of part 2 of my own book on poverty (Poor Policy: How Government Harms the Poor [Boulder, Colo.: Westview, 1996]), although he provides a far briefer description of how government inadvertently harms the poor through labor-market regulations, the public-education monopoly, drug prohibition, Social Security, and all sorts of other redistribution to the nonpoor.

Tanner is also careful to note the limits of any effort, whether public or private, to help the poor. As he illustrates, each individual has personal responsibility and considerable ability to stay out of poverty. If one simply finishes high school, avoids out-of-wedlock births, and works consistently, then long-term poverty is exceptionally unlikely. Ultimately, government causes more harm than it should, and it cannot do as much as good as most people suppose. For better or worse, the best available answers for poverty are individual responsibility, a government that establishes an environment in which hard-working people can succeed, and an active and compassionate civil society that helps those who fall through the cracks.