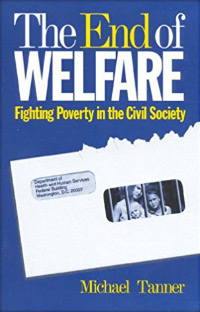 The End of Welfare
Fighting Poverty in the Civil Society
Michael Tanner
Hardcover Paperback
This book review appeared in the Summer 1997 issue of The Independent Review.

Michael Tanner, the director of health and welfare studies at the Cato Institute, has aptly titled his new book The End of Welfare. He is not alluding to President Clinton’s pledge to “end welfare as we know it” but to his own preferred solution to the welfare mess: end all government welfare programs and rely on private charities. As recently as ten or fifteen years ago, few if any serious scholars would have had the audacity to offer such a radical proposal in print. It is a testament to the influence of Charles Murray’s work and growing evidence of the defects of existing welfare programs that this proposal for seemingly draconian reform no longer seems unthinkable.

Tanner develops his argument in seven information-packed chapters as well as a brief concluding chapter. These chapters cover a lot of territory and are buttressed with an impressive 570 footnotes in only 183 pages of text (plus another 79 for the appendix, which gives brief descriptions of 71 [!] different welfare programs that compose the bulk of our welfare “system”). Although the book falls short of informing the reader of “everything you always wanted to know about welfare,” the footnotes provide references to a large body of related literature.

The first three chapters provide background information concerning the current welfare system. Chapter 1, “Poverty in America,” covers the definition and measurement of poverty, demographic characteristics of the poverty population, trends over time, the causes of poverty, and general economic inequality. With regard to the causes of poverty, Tanner emphasizes inadequate schooling, having children outside marriage, and not working: “It has been said that the surest ways to stay out of poverty are to (1) finish school; (2) not get pregnant outside marriage; and (3) get a job, any job, and stick with it” (p. 17). The emphasis on these factors, especially illegitimacy, is well placed, but I would like to have seen it acknowledged that even if everyone plays by these “rules,” some people will still be poor. One doesn’t have to accept everything in The Bell Curve to know that chance, whether of nature or nurture, gives some people insufficient abilities to earn an adequate income. In fact, it is precisely because of the suspicion that many people are poor “through no fault of their own” that we feel compassionate toward the poor.

In chapter 2, “The Rise of the Welfare State,” Tanner discusses the early history of welfare in America, including the role of private charities, and the rise of the modern welfare state from the New Deal through the Great Society and up to the present. By 1993, total government spending on welfare programs had reached $324 billion. Tanner uses the familiar tactic of dividing this spending by the number of poor people: “For a poor family of four, that amounts to more than $33,000. If we simply gave poor people the money, we could raise every poor family above the poverty level for less than half of what we are now spending” (p. 58). The intended inference is either that a lot of the money goes inappropriately to people who are not poor or that the bureaucracy siphons off most of the funds. Neither is correct. Most of the resources do go to the intended beneficiaries, but are not counted; about 80 percent of welfare spending takes the form of in-kind transfers, and poverty is defined in terms of cash incomes only. Administrative costs of most government welfare programs are under 12 percent. Finally, of course, some nonpoor people do get substantial welfare benefits, enough to raise them above the poverty line. If we took away all these benefits, as suggested in the preceding quote, and gave them to people who are still poor, we would not eliminate poverty but cause millions who are now nonpoor because of welfare to become poor. For all these reasons, I wish commentators would stop using this fundamentally misleading argument.

In chapter 3, “The Failure of the Welfare State,” Tanner charges the welfare system with increasing illegitimacy and family breakup, undermining work incentives, increasing crime (mainly through its effect on increasing the number of children in single-parent families, who disproportionately commit crimes), and fostering intergenerational dependence. There is ample evidence now, much of it cited by Tanner, that our welfare programs do have these effects. But that does not constitute proof that the system has failed unless one believes, as no one does, that welfare programs without any undesirable side effects can be designed. Much depends on how large the harmful effects are. Even Charles Murray believes that only about half of the increase in illegitimacy is due to welfare; many believe the effect is smaller. And surely some beneficial effects from providing $324 billion in transfers to low-income families should be balanced against these harmful outcomes. Even so, Tanner is surely correct to stress the undesirable consequences of our system that lead many observers to regard it as a failure.

Chapters 4 and 5 are titled, respectively, “Why Liberal Welfare Reform Won’t Work” and “Why Conservative Welfare Reform Won’t Work.” In these chapters Tanner examines some of the favored reform proposals popular on the Left and on the Right. The favored liberal policies discussed are job training, child care, child support enforcement, and the Earned Income Tax Credit. The favored conservative policies discussed are workfare, subsidized jobs, LEARNfare, block grants, cutting “fraud, waste, and abuse,” and restricting immigration. Given the limited space devoted to each of these issues, Tanner persuasively argues, with much evidence cited, that the proposed policies either won’t work or at best will have modest benefits. Though one could quibble over details, I think Tanner is correct in suggesting that neither the mainstream Left nor the mainstream Right has come up with any proposals that would significantly improve our welfare system.

Tanner develops his solution in chapter 6, calling for an end to all government welfare programs and reliance on private charity. He counters the major objection—that charitable giving will be insufficient to deal with the problem—with two points. First, substantially fewer poor will need assistance in the absence of disincentives created by government programs. I don’t find his arguments or evidence very persuasive on this point. Second, charitable giving will rise when government welfare is abolished. This claim is certainly true, and Tanner cites some of the empirical literature for support. But he does not point out that the evidence (my reading of it, in any event) suggests that each dollar cutback in government welfare will produce only five cents more of charitable giving. Because of the free-rider problem associated with individual voluntary giving, we can expect a massive reduction in the quantity of resources available to help the poor if we eliminate government welfare. Tanner does mention the possibility of using tax credits to encourage charitable contributions.

Although a number of private charities have been effective in helping the poor, reliance on private charity has disadvantages Tanner does not mention. For example, fund-raising costs typically run about 20 percent of total giving for major charities, so only 80 cents of every dollar given would be available to help the poor. And some of that 80 cents would have to cover administrative costs of the programs. Moreover, it is far from clear that private welfare won’t have disincentive effects of the same sort that plague government welfare. (Editor’s note: For historical evidence on this point, see Stephen T. Ziliak, “The End of Welfare and the Contradiction of Compassion,” The Independent Review 1 [Spring 1996]: 55–73.) One notable omission in Tanner’s book is an explanation of the intrinsic difficulty (bordering on impossibility) of designing any welfare program that will avoid substantial disincentive effects of the type he deplores.

In chapter 7, “Creating Opportunity,” Tanner completes his argument by calling for major across-the-board cutbacks in government nonwelfare programs. Getting government “out of the way” is supposed to give rise to a more prosperous economy with greater economic growth, an environment in which the poor can better help themselves. Though many of the individual proposals discussed—privatize social security, eliminate the minimum wage, institute school vouchers—have merit, it does seem to be stretching to call for a general regime of limited government in the name of helping the poor.

All in all, I do not think that The End of Welfare will convince many readers that ending welfare is a panacea. Nonetheless, it ably presents a position that deserves, and one hopes will get, increased attention. No one is happy with the present welfare system and, as Tanner points out, it is unlikely that the recently enacted welfare reform will change matters much. A greater role for private charities, somehow achieved, probably will be an element in any true solution to our welfare woes.