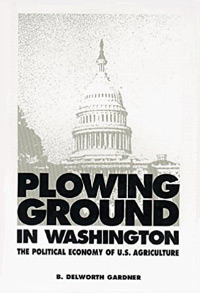 Plowing Ground in Washington
The Political Economy of U.S. Agriculture
B. Delworth Gardner
Hardcover
This book review appeared in the Summer 1997 issue of The Independent Review.

In Plowing Ground, Del Gardner presents an extensive, well-reasoned critique of U.S. agriculture programs that is accessible to a wide range of potential readers. He writes primarily for educated laypersons, seeking to give them a better understanding of agricultural policy—how programs work, the effects of different programs and policy tools, and the functioning of the political process through which policy is enacted. He argues that

farm policy as it exists today (1) distorts the economy and produces significant efficiency loss that reduces average standards of living, (2) massively redistributes income and wealth from taxpayers and consumers to farmers, primarily landowners, who are now richer than average Americans, and (3) degrades and despoils the natural and physical environment in significant ways. (p. xi)

Gardner devotes a considerable portion of the book to explaining why such negative-sum policies are enacted and why they have persisted so long.

Part 1 of Plowing Ground is composed of five chapters. The first discusses the political climate surrounding the 1985 farm bill and provides a brief history of U.S. agricultural programs. Gardner indicates that although he and other students of agricultural policy expected implementation of major changes in the 1985 farm bill, the Food Security Act of 1985 for the most part simply extended earlier agricultural programs. He uses the inconsistencies between expectations and realizations in 1985 to motivate his inquiry into the causes and effects of agricultural policies. In chapters 2 and 3 the concepts of efficiency and equity are introduced, the role played by prices in a market economy is discussed, and some impacts of selected agricultural policies are examined. Issues receiving particular attention include the efficiency effects of trade barriers, the validity of arguments that price supports and marketing orders increase stability, and the impacts of agricultural policies on input usage. Chapter 4 provides a case study of the credit policies of the Farmers Home Administration (FmHA). Gardner demonstrates the extremes to which these policies go to keep farmers from failing, and he makes a convincing case for their overall inefficiency. Chapter 5 pertains to the distribution of agricultural support payments. Here Gardner presents data demonstrating that the bulk of these payments goes to large, wealthy farmers rather than small, low-income family farmers.

In the four chapters of part 2, the author answers the question “Why (given the failures of farm policy discussed in part 1) do farm programs exist and persist?” Among the several possible answers to this question considered in chapter 6, Gardner gives most credence to the “public choice” explanation. In the context of agricultural policy, public choice principles suggest that small producer interest groups with large individual stakes in political outcomes will lobby successfully for the enactment of legislation that imposes small per-person costs on large numbers of taxpayers and consumers. Thus, the existence and continuation of programs such as the sugar program, from which a small number of sugarcane processors and growers and high-fructose-corn-sweetener producers gain millions of dollars annually, while individual consumers bear costs of about five dollars per year (United States General Accounting Office, “Sugar Program: Changing Domestic and International Conditions Require Program Changes,” GAO/RCED-93-84, April 1993). In chapter 7, Gardner presents an economic model of the supply and demand for favors in political markets. From the model, he derives hypotheses concerning the ability of different agricultural groups to obtain subsidies. He uses the model to explain the credit subsidy policies of the FmHA. In chapter 8 the author discusses relevant aspects of the structure of Congress, in particular the role of committees and subcommittees, and the growing importance of political action committees (PACs). In chapter 9 he displays data showing the contributions of the agricultural PACs that contributed the most in the 1988 election cycle. He then presents and discusses the results of a statistical analysis designed to test the hypothesis that “PAC contributions are directed to those legislators who are most likely to produce political favors of benefit to the PAC constituents” (p. 207). The conclusion: PACs make their contributions “where they have the highest payoffs for the interest group represented” (p. 234).

The three chapters of part 3 focus primarily on the environmental impacts of agricultural policies. Chapter 10 examines the various impacts on soils and wetlands. Important arguments include (1) but for price supports, much highly erodible land in crop production would not be so used, (2) the Conservation Reserve Program has been successful in transferring wealth to farmers but not in achieving its stated environmental objectives, and (3) farmers have strong incentives to take economical measures to reduce soil erosion without government intervention. In chapter 11, Gardner discusses the relationship between agricultural policies and chemical contamination of the environment. He argues correctly that the issues involved are complex and that “effective programs have yet to be conceived and implemented” (p. 286). Federal reclamation projects, the irrigation subsidies associated with such projects, and their economic and environmental consequences are the topic of chapter 12. Gardner demonstrates that irrigation subsidies are substantial and argues that federal water policies, in general, have had negative effects on the natural environment in the West.

Part 4 of Plowing Ground consists of a single chapter, in which Gardner discusses the prospects for reform of agricultural policies and the political process. On the former, he generally advocates the elimination of government programs that interfere with market functions. Realizing that political realities preclude total elimination of agricultural programs, he suggests several changes that he believes would result in net improvements. One notable suggestion is to decouple income support payments from production decisions, which would reduce the distortionary impacts of current subsidy payments. From the perspective of farmers, the political disadvantage of decoupling is that the size and nature of government subsidy payments would be more obvious to taxpayers.

For the most part, this book should be highly readable by educated nonacademic laypersons. By not including a single supply/demand graph to illustrate the impacts of agricultural programs, Gardner keeps his targeted audience from getting bogged down in the technical aspects of the economic analysis of such programs. Perhaps, however, the reader will get bogged down in the institutional details of some of the issues and policies that Gardner discusses in detail. For example, his detailed discussions of the rules regulating PACs and of the details of the Conservation Reserve Program and target-price programs may challenge the attention span of some readers. On the other hand, his focused discussion of particular policies is useful because it provides the reader with some inkling of the extreme complexity of agricultural programs—a point that any book on the topic would be remiss in not making.

One portion of the book, however, does seem somewhat out of place in a book targeted for noneconomists. This is the extensive multiple-regression analysis in chapter 9 of the determinants of PAC contributions. Although the author explains the meaning of these findings well and does warn readers in the preface that noneconomists may want to skip this material, this section strikes a discordant note.

A problem with the book—albeit one clearly beyond the author’s control—is that on some issues it is already out of date. The inevitable lag between writing the book, seeing it through the publishing process, and the writing and publishing of reviews like the present one means that several years have passed since Gardner set down his thoughts on then-current issues. The Uruguay Round GATT, for example, had not been signed at the time he finished the book. The Federal Agriculture Improvement and Reform Act of 1996 (the FAIR Act) was passed last year. This act made some important changes in agricultural policy, most notably the elimination of target-price programs. No longer receiving deficiency payments, farmers who participated in target-price programs in the recent past now have very few restrictions on what they can produce; they receive subsidy payments not tied to their current production of particular crops. This aspect of the FAIR Act accords with Gardner’s call for decoupling. Other aspects of policy, however, remain unchanged: the structure of the sugar and peanut programs remains intact, export enhancement subsidies continue, loan rates and marketing loans remain in effect, and so forth.