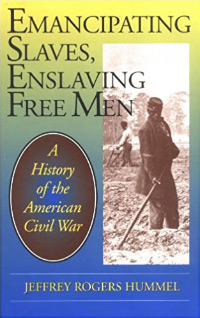 In Emancipating Slaves, Enslaving Free Men, Jeffrey Rogers Hummel, a professor of history and economics at Golden Gate University, presents a short, readable, and reliable history of the Civil War. Several chapters are devoted to the political and economic background to the Civil War and two to its consequences. The study is based on extensive reading and a thoughtful approach to the analysis of certain key issues. Although much of the narrative is a well-presented version of current views, in a number of areas Hummel’s arguments reflect a more individual approach. In addition to the text, fifteen excellent bibliographic essays, totaling more than one-quarter of the book, acquaint the reader with much of the relevant recent literature and, at times, present the author’s disagreement (or agreement) with these works in more detail than in the text. Indeed, readers will probably learn more about the author’s opinions from these bibliographic essays than from the text.

The major areas in which Hummel differs from current standard views generally reflect his strong antigovernment views, leading him to argue that the increased centralization of the North during the war, which many regard favorably, was rather costly to the pursuit of its interests. This reason is one of several—military decisions being another—for Hummel’s general anti-Lincoln attitude. Hummel claims that the Civil War was “America’s real turning point” in beginning “its halting but inexorable march toward the welfare-warfare State of today” (p. 359). The war also caused increased centralization in the South and, unlike the numerous historians who have argued that the southern defeat reflected too much decentralization, Hummel argues that “Vice-President Alexander Stephens had it exactly right. The despotic centralization of Jefferson Davis and his West Point cabal alienated the southern people from the cause of independence” (p. 289). The resulting loss of morale explained the southern defeat and the South’s failure to continue with some form of guerrilla warfare. Though the argument of loss of morale has been made, it is usually attributed more to class divisions within the South than to overcentralization of the government. Either way, the villain would be Jefferson Davis, so perhaps there is less to the disagreement than appears. In general, however, although wartime centralization occurred in both North and South and the scope of government action expanded at federal, state, and local levels, the next fifty years differed substantially from the aftermath of World War I, leaving some lags and reversals to be accounted for.

To claim that the centralization that did occur during the war was somehow avoidable and not inevitable, it is necessary to argue that the war was unnecessary and need not have happened. Given Hummel’s views on human rights and the present clear consensus on the evils of slavery, his position must then account for an ending of slavery without warfare. Historians confronted a similar problem in the 1920s, in their reaction against World War I and with the ensuing belief in the undesirability of war. Charles Ramsdell and others solved the problem by arguing that slavery had become economically doomed and soon would have been voluntarily ended by the South because of its unprofitability. One difficulty in this argument, however, was that no specific time was specified for this termination. In the 1850s, Lincoln, George Tucker, and others did provide a time horizon of about 100 years, which, if accurate, poses some moral problems. Given the research on the slave economy in the past four decades, Hummel believes that this economic argument is somewhat limited, but he claims that slavery was “doomed politically” because of its accelerated decline in the border states and the expected (by him) repeal of the Fugitive Slave Law, which would raise the costs of enforcement in the South and allow more slaves to escape to the North. Then, he argues, “the peculiar institution’s final destruction within an independent cotton South was inevitable” (p. 353). Here, again, no time span is specified. In Brazil and Cuba, where slavery was “politically moribund,” slavery did not end until the 1880s.

Hummel’s argument that one can consistently hold views “passionately opposing slavery and simultaneously favoring secession” (p. 353) implies either the acceptance of the institution for an indefinite future or a belief that more and more pressure could be placed on the South without provoking warfare. Further, if, as Hummel argues, the right of secession is accepted and if slavery would have ended without war, the cause of “the Civil War was the refusal of Lincoln and other northerners to honor the revolutionary right of self-determination” (p. 351, quote from William Appleton Williams). Thus, Hummel’s consistent antiwar, anti-government-centralization argument rests on the resolution of a key empirical issue: how much time would pass before emancipation would be voluntarily agreed upon.

The text of the book covers the first part of its title at length, but the second part, Enslaving Free Men, in less detail. Hummel quotes the abolitionist Ezra Heywood, who said in 1864 in response to the draft acts that “the right to draft men is as purely imaginary as the right to enslave them” (p. 254). In regard to conscription in the South, Hummel observes that it “had led the nation of black agricultural slavery to the ironic but appropriate adoption of white industrial slavery” (p. 251). In contrast to some of the recent literature, he views the economic fortunes of freedmen in the post-bellum South as having been more favorable. There was impoverishment, but also gains due to the ending of slavery and the increase in leisure and, over time, gains in measured black incomes. The villain, to Hummel, was not sharecropping but the “government-induced derangement” (p. 326) of the monetary system due to the imposition of the National Banking System, which, he argues, ended “probably the best monetary system the United States has ever had” (p. 224). Weaknesses of the antebellum system, alleged via “trumped-up charges of financial instability” (p. 224), sprang from too much, not too little, regulation. Perhaps, but why wasn’t the Civil War monetary system terminated as soon as possible? An argument made by Charles and Mary Beard, that in the absence of the Civil War the basic changes in government economic policy would still have taken place because of the continuing changes in the structure of the economy, raises important questions about the war’s relation to the expanded government role.

Hummel’s discussion of the slave South treads more familiar ground in arguing for the profitability of slavery and the antebellum growth in measured southern output. He points to the lowered social profitability of slavery once the welfare of the slaves is included in the calculus, and argues that the gains from slavery accrued primarily to consumers of slave-grown products. There is an interesting discussion of enforcement and control costs, which are not evaluated financially, however, for their effects on slave prices or nonshareholder income; nor are similar costs examined for the urban North. Also of interest are the discussions of the effects of various forms of black resistance. There is a tension in Hummel’s attempts at reconciling slave resistance and the slave’s desire not to work with the high and rising prices paid for slaves over time. The behavior of slave prices raises questions about the political doom Hummel believes awaited slavery in the South.

It is not possible here to cover the many issues raised by Hummel and to make frequent comparisons with the arguments of other historians and economists on these questions. Hummel has written a useful short history of the Civil War that will be of interest to both scholars and the general reader. I highly recommend it as a most stimulating and educational read.

Stanley L. Engerman
University of Rochester
American HistoryFreedomGovernment and PoliticsGovernment PowerLaw and LibertyPhilosophy and ReligionSocialism, Communism, and Collectivism
Subscribe Buy This Issue Get the App