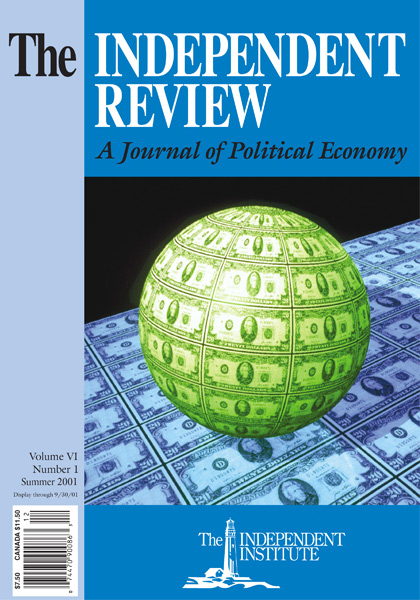 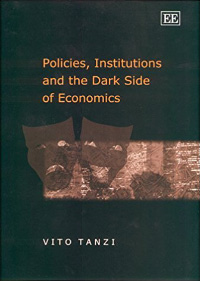 Policies, Institutions and the Dark Side of Economics
Vito Tanzi
Hardcover
This book review appeared in the Summer 2001 issue of The Independent Review.

As if being labeled dismal were not sufficient insult, Vito Tanzi now tells us that economics has a dark side. Despite the deceptive title, I found the book enlightening. Tanzi is director of the Department of Fiscal Affairs of the International Monetary Fund (IMF), a position he has held for two decades. During his tenure, he has witnessed numerous IMF and World Bank policies go awry. To his credit, he has kept abreast of academic writings and has himself contributed to the literature. His latest book is largely a compilation of his writings in which he has striven to reconcile“textbook” economics with policy implementation in developing countries. Over the years, Tanzi has found that the policy lessons expounded in economics textbooks consistently fail when applied to the institutionally different developing world, the results ranging from disappointing to disastrous. This failure is the “dark side of economics.”

In the first five chapters, Tanzi discusses the role of government. In the first chapter, written in 1974, he argues that income maximization has never been the sole objective function of government leaders. Clearly, Tanzi was a front-runner on this issue, particularly among those working within the Beltway. In chapter 2, he makes a good case that the change of the Washington consensus on the proper role of government in developing countries, from antimarket and interventionist to pro–free market, resulted from the accumulating evidence of corruption in developing countries. To gauge the extent of government involvement in the economy, Tanzi cautions us in chapters 2 and 3, government expenditure as a percentage of gross domestic product (GDP) is a woefully inaccurate measure. This argument alone is not a new one, having been cogently made for the United States by Robert Higgs in Crisis and Leviathan: Critical Episodes in the Growth of American Government (New York: Oxford University Press, 1987, chap. 2), but Tanzi adds a new twist. Lacking the capacity to tax directly, many developing countries have been far more ingenious than developed countries in using a myriad of quasi-fiscal policy instruments, which, besides being highly inefficient, obfuscate the role of government. For example, the government in many developing countries allocates a significant amount of investment, credit, and foreign exchange. Many of these activities are filtered through existing financial institutions that are required to lend to certain firms or sectors, generally at below-market interest rates.

Tanzi also presents evidence (produced by others) that the magnitude of the revenue generated from financial repression and seigniorage can be large. He notes that the prevailing wisdom in academia and in policy circles is that these quasi-fiscal activities should be abandoned in favor of traditional taxes, but he worries about the difficulty of implementing proper tax policies, and he fears that the result might be increased fiscal deficits, which in many instances are monetized in the short run and not sustainable in the long run. It appears that Tanzi is correct: numerous Latin American countries have liberalized their economies but have been forced to take severe measures as means of committing to stable currencies in (generally unsuccessful) attempts to prompt politicians either to raise taxes or to reduce spending. In this camp, we can include Argentina (which may be forced to abandon convertibility); Brazil (which was forced to devalue the real); and Ecuador and El Salvador, which have dollarized their economies.

Tanzi maintains throughout his book that redistribution of wealth or income is a proper role of government. He argues (chapter 4) that redistribution through regulation, such as rent control, is unlikely to succeed. Furthermore, spending is an inadequate guide to redistribution because the providers of programs frequently hijack a considerable amount of intended largesse. In short, he opposes any quick fix but recommends investment in human capital, in particular K–12 education rather than university spending, as the best method for reducing income inequality. Distinct from such orthodox recommendations, Tanzi stresses the importance of ethics in efforts to reduce inequality; if people have more compassion for the poor, they will voluntarily give more and might work more in order to give more. Does government have a role in promoting compassion for the poor? Tanzi advocates greater expenditure on the ethical education of children, though he recognizes the inherent conflict with freedom and civil liberty. Notwithstanding these caveats, he believes that such a route should be tried, given the failure of traditional programs.

Popular and academic writing on corruption has exploded in recent years, increasing more quickly than the shoe collection of Imelda Marcos in her heyday. Tanzi contributes four chapters to this literature. For the most part, he focuses on administrative rather than political corruption. By administrative or bureaucratic corruption, he means the granting of favors or dispensations to friends or family members. For example, if I oversee the authorizations of disability-insurance benefits, I am more likely to admit the claim of my Uncle Bob than the claim of a stranger. Given the number of bytes already devoted to the topic, I was doubtful that I would gain any new insights here. I was wrong. Tanzi argues that some cultures are more inclined toward corrupt practices. Countries with high degrees of personal interaction—a form of social capital—are more likely to have much corruption. Interactions at “arms length,” such as those in many market transactions, present little scope for corruption, and bureaucrats play by the rules. In cultures with active personal interaction among friends and families, people build up obligations, and they consider it natural to treat relatives and friends preferentially. Indeed, not doing so would be considered perverse. One might regard this pattern as the dark side of social capital.

From the insight that corrupt activities are more likely to arise from personal relationships, Tanzi maintains, probably correctly, that local bureaucrats are more likely than national bureaucrats to be corrupt. He also suggests that because personal relationships take time to develop, the bureaucracies of the USSR probably became more corrupt over time. Recent accounts of the Brezhnev regime are in accord with this hypothesis.

Eliminating corruption is no easy task because generally both the corrupter and the corrupted benefit from the transaction. Indeed, this proposition has led some to argue that a bit of corruption enhances efficiency. However, as Tanzi points out, the evidence is accumulating that corruption slows economic growth. Any progress against corruption requires strict intolerance at the highest level of leadership. In some instances, such intolerance appears to exist, though enforcement remains problematic. Tanzi further recommends that governments reduce quasi-fiscal regulations, such as the licensing of numerous business operations, because they are particularly susceptible to discretionary corrupt practices. He also suggests that governments raise the costs of corrupt practices both directly, by imposing harsh fines or prison sentences, and indirectly, by increasing the salaries of civil servants, which would be lost income to those fired for acting corruptly. Naturally, detection and punishment are more likely with an independent judiciary and a free press.

Traditionally, economists have praised budget allocations skewed toward capital because of the evidence that capital investment produces growth. Contrary to textbook economics (but consistent with points Andrei Shleifer and Robert Vishny made earlier in “Corruption,” Quarterly Journal of Economics 108 [August 1993]: 599–617), Tanzi argues and presents evidence that corruption attends capital projects. Obviously, spending on low-productivity capital projects does little to promote growth; worse, it might crowd out higher-yielding investments in education and health.

Having considered corruption, Tanzi turns his attention in chapters 10–12 to tax evasion, money laundering, and the underground economy. Although these chapters do not naturally flow from one to the other, we can gain some insight from each. For example, besides reducing the fiscal take, tax evasion may be a partial cause of the numerous quasi-fiscal regulations that Tanzi (rightly) consistently deplores.

In the remaining chapters, Tanzi discusses the international dimensions of national tax polices, fiscal federalism, and the budget deficits in transition economies. Federalism is currently in vogue, perhaps because of the relative success of China (a somewhat decentralized economy) compared to Russia (a more centrally controlled economy), but Tanzi calls attention to the dark side of federalism: the periphery has an incentive to spend while pushing costs to the center. Argentina (prior to the convertibility plan) and Brazil (prior to the real plan) exemplify federalism under soft-budget constraints, with consequent galloping inflation. In the final chapter, Tanzi cautions us not to be too critical of budget deficits in transition economies; they may signify movement toward a more efficient economy as state enterprises shed redundant workers and abandon certain social programs, such as health care, which are better conducted by the government or by specialized private providers.

Tanzi highlights the failures of past development policies, and indeed his insights might be used as ammunition to fight funding of the IMF and the World Bank, but I find it heartening that a senior IMF staffer has learned a great deal from failed policies. Furthermore, Tanzi is generally on target as to what should be done. The weakness of the book is that it tells us little about how to implement the recommended policies. Perhaps Tanzi has more faith than I do in the ability of the IMF and the World Bank to enforce structural changes. My belief is that structural changes generally are impossible in the absence of political reforms. What development economics needs is a marriage of the insights Tanzi and others have generated and the insights of the political scientists and economists practicing the new institutional economics.

Lee J. Alston
University of Illinois and National Bureau of Economic Research
Economic PolicyEconomistsEconomyPhilosophy and Religion
Subscribe Buy This Issue Get the App