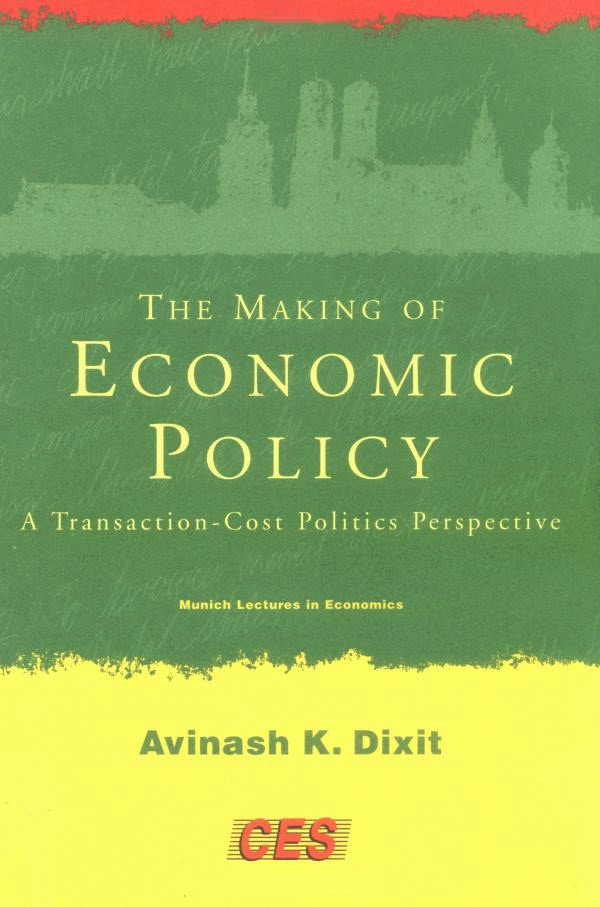 The Making of Economic Policy
A Transaction-Cost Politics Perspective
Avinash K. Dixit
Hardcover Paperback
This book review appeared in the Summer 1998 issue of The Independent Review.

The Center for Economic Studies of the University of Munich recently selected Avinash K. Dixit, professor of economics at Princeton University, as the first recipient of its Distinguished CES Fellow award, inviting him to deliver the first series of what are planned as annual “Munich Lectures in Economics.” The volume reviewed here is a monograph based on that set of lectures. It is an important work.

Dixit chose as his subject “transaction-cost politics,” a term he attributes to Douglass C. North (“A Transaction Cost Theory of Politics,” Journal of Theoretical Politics 2 [1990]: 355–67). Dixit’s main thesis is that transaction costs provide an umbrella concept as important in understanding politics and policy making as in understanding economics. I heartily concur; indeed, I have been making a similar case for endogenously determined transaction costs as an overarching political concept in published work since 1983. Unfortunately, although Dixit expressed his belief that his “presentation of a complete transaction-cost perspective on economic policy analysis is a new contribution” (p. 33), by 1996 it was no longer a new idea. Moreover, Dixit’s unfamiliarity with earlier work on political transaction-cost manipulation caused him to miss certain already developed insights regarding transaction costs in political environments.

The main thesis of Dixit’s monograph is that transaction costs provide a useful analytical tool for integrating a variety of economic models of political processes. In chapter 1 the author examines normative and positive models of policy making, developing the theme that both approaches have defects and that we need a synthesis, a “real time” perspective on policy processes as “transaction-cost politics.” His discussion of positive models in this chapter focuses chiefly on the “public choice or contractarian view,” which he equates with James Buchanan’s (primarily) and Gordon Tullock’s contractarian analysis of constitution making. Public-choice literature on what politicians and government officials actually do receives little attention. Dixit concludes that Buchanan’s distinction between the constitutional (rules) stage of decision making and “policy acts” within an existing constitutional regime is not as clear-cut in practice as the terminology suggests: constitutions are incomplete contracts allowing for ex post manipulations, and long-lasting policy acts often have many of the characteristics of rules. Thus he envisions a “rules–acts” spectrum of economic policy making, characterized throughout by substantial transaction costs.

In chapter 2, Dixit develops his theory of transaction-cost politics. His strategy is to adapt to the political realm the transaction-cost economics developed by Oliver E. Williamson (The Economic Institutions of Capitalism. New York: Free Press, 1985). Williamson has argued for years that contractual arrangements developed by firms can be understood correctly only when interpreted in light of the real-world transaction costs that characterize particular business situations. Williamson has shown that in ongoing business relationships, transaction costs associated with limited information (bounded rationality), ex post opportunism, and asset specificity can be reduced by innovative, nonstandard contractual arrangements (termed “governance structures”). Williamson’s policy conclusion is that we should not judge a book by its cover: nonstandard contractual arrangements that may at first appear to be inefficient may represent innovative and efficient ways of reducing transaction costs involved in business dealings.

As Michael Crew and I did to different effect in 1990 (“On the Efficiency of Law: A Public Choice Perspective,” Public Choice 66 [1990]: 15–36), Dixit applies Williamson’s logic to political interactions, noting that transaction costs are characteristically more pervasive in political processes than in economic interactions. He then offers a “taxonomy” of political transaction costs (pp. 54–58) that simply reproduces Williamson’s general categories—namely, information-impactedness, opportunism, and asset specificity. Dixit does not provide a detailed taxonomy of specific types of actions government officials and other political actors take to alter transaction costs. (For such a taxonomy, see my “Political Transaction-Cost Manipulation: An Integrating Theory,” Journal of Theoretical Politics 6 [1994]: 189–216).

Emulating Williamson’s work on economic governance structures leads Dixit astray at critical junctures in his theoretical analysis of transaction costs in political processes. Dixit argues that transaction costs are chiefly unavoidable constraints on policy processes and that political actors have incentives to devise strategies to “cope” with or “mitigate” these transaction costs (p. 45). Because Dixit perceives potential gains from devising ways to reduce political transaction costs, he believes that “coping” or “ameliorating” strategies, such as establishing credible commitments, will naturally emerge as a result of political interactions. Although he acknowledges that “political authorities can sometimes manipulate information and hide from the citizens the facts about their lack of success” (p. 59), Dixit argues that “the participants in the process have natural, endogenous incentives to reduce such transaction costs or to minimize their effects, and we must examine various mechanisms by which political processes and institutions will attempt to do so” (p. 44). Dixit’s occasional allusions to people’s ability to manipulate political transaction costs to their own advantage are nowhere made an integral part of the analysis. Instead, echoing Williamson, Dixit’s dominant theme is that political arrangements often look inefficient on the surface but may actually represent the best way of “coping” with the unavoidable transaction costs of politics. In political interactions as in market interactions, Dixit sees “clear potential benefit from economizing on transaction costs” and concludes that “rules and institutions should, and do, evolve to serve this purpose” (p. 61).

Dixit’s theory chapter is extremely useful for its compilation of a large literature dealing with issues related to transaction-cost politics, including information-cost economics, agency problems, and other issues. To his credit, Dixit has styled his presentation for a mixed audience consisting of economists, political scientists, and policy practitioners (p. xvi). The literature he has brought together provides a valuable resource for professional economists, political scientists, and others working in related fields.

Highlights of Dixit’s monograph include the two case studies presented in chapter 3. There Dixit discusses U.S. tax reform and international trade policies under GATT and the World Trade Organization as examples of policy areas that demonstrate the importance of a transaction-cost politics approach. Interestingly, the moment that Dixit examines an actual policy issue such as tax reform, deliberate government manipulation of political transaction costs stares him in the face. He describes the deliberate changes in congressional committee structure that, over the years, have changed the transaction costs of decreasing central government expenditures by either concentrating the decision-making power in a single appropriations committee (thus internalizing expenditure trade-offs) or spreading the power among multiple committees (thereby introducing common-property and externality problems that increase the transaction costs of controlling government expenditures). This intriguing story provides a glimpse of the transaction-cost manipulation that, in my view, is the heart and soul of politics. Even here, however, Dixit assumes that if the “dominant political forces” want to change something, it will be changed. This notion blurs our understanding of “dominant political forces” and seems to imply that the “public will” will be implemented. However, in the real world of politics, political transaction-cost manipulation often allows “dominant political forces” to sustain policies that may contravene the will of the citizenry.

Dixit concludes by stating, à la Williamson, that “many apparently inefficient outcomes can in fact be understood as consequences of constraints imposed by various transaction costs, or as creditable attempts to cope with them” (p. 146). He reinforces this efficiency perspective as follows:

This is not a Panglossian assertion that “everything is for the best in this, the best of all possible worlds”; the best of all possible worlds would not be beset by transaction costs. Rather, it is a reminder of how much policy freedom is constrained by transaction costs. It is saying, “This world is far from being ideal; but a would-be policy innovator would do well to think whether the existing setup is making the best of, or at least coping quite well with, the world’s imperfections.” (pp. 146–47)

Certainly policy innovators should think about this issue. But the likely result of such reflection—if the origin and evolution of programs such as Social Security, income-tax withholding, Medicare, federal controls over public education and broadcasting, and other major programs undergirding federal power in twentieth-century America are representative—is that “transaction-cost politics” predominantly impels self-interested politicians to increase, not reduce, political transaction costs to the public (and to others in government) on crucial policy issues that influence the scope of government authority.