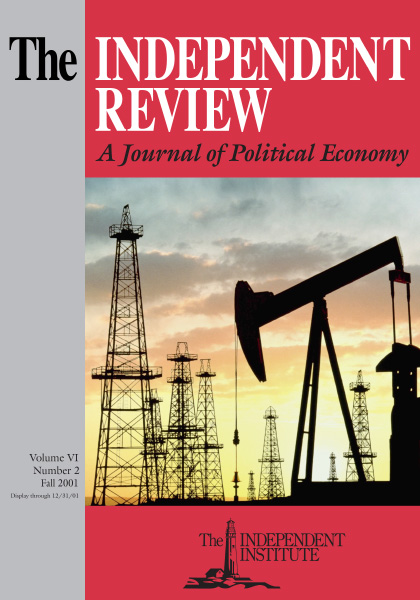 A Burning Issue
A Case for Abolishing the U.S. Forest Service
Robert H. Nelson
Kindle Hardcover Paperback
This book review appeared in the Fall 2001 issue of The Independent Review.

In A Burning Issue, Robert Nelson argues that the U.S. Forest Service is demoralized within and besieged from without by a wide array of interest groups. He attributes this sorry state of affairs to the Forest Service’s inability to define its mission in a time of rapidly changing values in American society. His solution to this predicament is to abolish the agency.

When the Forest Service was created in the early twentieth century, its mission was relatively clear: to supply timber to meet the material needs for wood of an expanding national economy. Over the years, the mission has been transformed from one of supplying commodities, such as timber and grass, to one of supporting the principle of multiple use, with recreation added to the mix of traditional commodity uses. Even though the principle of multiple use led to conflicting and contradictory policies, it was a more manageable state of affairs than its successor. Today, ecological sustainability, as espoused within the broader framework of ecosystem management, has become the foundation on which the national forests are to be managed.

In the earlier years, when its mission was relatively clear, the Forest Service was considered a model agency and acclaimed for its adherence to scientific management principles and for its dedicated workforce. Those who worked for the agency, as I did in the early1960s, had little doubt about the agency’s mission. We were there primarily to manage the national forests for timber production. Fire was the enemy, and stories of suppressing blazes against impossible odds would fill evening discussions. Nelson argues that even the earlier successes were exaggerated. The Progressive Era concepts of scientific management were flawed, especially with respect to fire policy. A theology of timber management existed that called for almost complete protection of timber from the ravages of fire. The culture of the Forest Service from its early days exhibited a strong conviction of doing God’s work in the world, a moral righteousness that was embroidered with scientific technology. This conviction led to numerous and costly policy decisions because basic economic principles, such as time discounting, were ignored. As the title of his book suggests, however, Nelson believes a failed fire policy is most responsible for the agency’s current dilemma. “The leading policy issue today on the national forest system—issues that demonstrate the inability of the current Forest Service to deal with the basic problems of the national forests—revolve around forest fire and its ecological consequences” (p. 10).

There is little doubt that the Forest Service fire policy, with its emphasis on fire suppression, has been a mistake. Federal fire policy has sought to eliminate fire, but has instead merely changed its time and place. Wildfires have gone from being highfrequency, low-intensity events, which sustained certain ecosystems, to low-frequency, high-intensity fires prompting costly suppression attempts that have often proven futile in the face of overpowering fire intensity. High fuel loads, resulting from the prolonged absence of fire and the abundance of dead and dying trees, provide the conditions for high-intensity fires that cause enormous damage to soils, watersheds, fisheries, and other ecosystem components. The situation has been further exacerbated by a reduction in timber harvests. In the past ten years, timber harvests in the national forests have plummeted from twelve billion board feet per year to less than four billion. The result is a buildup of fuels that, when coupled with fire suppression, sets the stage for catastrophic fires.

Over the years, the Forest Service fire-suppression policy has come under increasing criticism, especially from environmental groups, who have attacked the policy for its lack of scientific basis. For an agency that had grown up preaching conservation, the gospel of efficiency, and scientific management, such an accusation was damning. The agency was forced into running a gauntlet, with commodity users and forest homeowners on one side and environmental groups on the other. In fairness to the agency, the beneficial effects of controlled burns, especially in the southern region of the country, have been appreciated since at least the 1920s. Nevertheless, environmental groups have viewed fire, especially when it occurred naturally, as an integral part of ecosystem management. This new paradigm is little more than a masked attempt to recast forest management to facilitate better the pursuit of objectives such as biodiversity and the restoration of forest conditions as they existed in the mid–nineteenth century. Pursuit of these objectives has led many environmentalists to argue that wildfires, including the widespread outbreak of fires covering significant portions of Yellowstone National Park in 1988, are ecologically beneficial. Although both sides claim that forest policy should be based on scientific principles, Nelson argues compellingly that much of the debate is grounded in religion rather than in science.

Nelson suggests that in recent years environmental groups have essentially taken control of the Forest Service. If that is so, why then does the Forest Service continue to expend substantial sums fighting fires, especially those it has little chance of controlling? According to Nelson, a variety of interest groups have converged to sustain the fire-suppression policy. The agency itself had created a mind-set, promoted by images of Smokey the Bear, that fire is the enemy, and at times it has appeared reluctant to admit to a mistaken policy. Add to the coalition a large contingent of fire-fighters, whose jobs during the fire season pay well, and of ranchers and homeowners whose property is threatened by wildfires on federal lands. All of these groups have an incentive to lobby for an active fire-suppression policy. Because taxpayers pay for fire-fighting largely at the national level, locals treat these firefighting 1 resources as if they have no costs. Nelson points out that a common refrain among westerners (most national forest land is located in the West) is that the federal government should “get out, and give us more money” (p. 144).

There is little question that interest groups shape policies and political behavior, but Nelson’s book would not win high praise from academics for its application of public-choice concepts. Although Nelson may have correctly identified the underlying interest groups, he does not offer evidence to support his claims about their politicking. However, such an analysis is not his objective. Rather, he seeks to make the case not only that Forest Service fire policy, along with reductions in timber harvests, has been a costly mistake but that the alternative approach advocated by many so-called environmentalists is also fraught with contradictions and costs.

Nelson clearly believes that timber harvesting can reduce the potential for catastrophic fires. In support, he points to data showing that the national forests are at greater risk of fire than industry forests and that many million acres of national forests are in dire need of remedial fuels reductions. Although timber harvesting should be a secondary goal in many national forests, even expensive prescribed burning might well pass a simple benefit-cost test. Catastrophic fires are the alternative. From an economic perspective, Nelson’s key point is that timber sales may pay in the long run if they can substantially reduce the risk of large future fires, even if the immediate returns are negative.

Selective harvests and prescribed burns are terms that usually raise the hackles of environmental groups, especially those that operate at the national level. Indeed, some of these groups argue that no efforts should be made to prevent fires. Nelson contends that well-organized and generously endowed environmental groups, centrally located along the Washington Beltway, have usurped the decision-making process, and he suggests that better decisions regarding the trade-offs between commodity uses of the forest and environmental concerns can be made at the local level. Although Nelson’s ultimate objective is to abolish the Forest Service—with ownership of the lands eventually being acquired by state and local governments or by non-profit entities such as the Nature Conservancy—his transitional approach, or variants of it, may attract the most attention.

In the short run, Nelson advocates decentralization, with local stakeholders allowed substantial say in how the surrounding national forest is operated. Along with the right to shape local policy, however, comes the responsibility for generating the needed funds to operate the forest. Essentially, Nelson is advocating that the costs and benefits of operating the national forests be largely internalized. Receipts from timber harvesting, for example, would be used to defray the cost of prescribed burns. Because ownership is not explicitly defined, however, this proposal would create a de facto commons. To deflect criticism that his proposal would merely substitute one tragedy for another, Nelson references Elinor Ostrom’s classic analysis of the commons, where she describes numerous instances in which local groups or communities have negotiated solutions without either formal property rights or formal regulations. Nelson also describes a number of instances in which local national-forest user groups came together to solve conflicts unresolved at the national level. He raises concerns, however, when he suggests, “the membership of the board would have to include reasonable representation from various users of the local national forest, including in a typical case timber companies and workers, ranchers, hunters, fishermen, miners, hikers, off-road vehicle users, and other types of recreational users.” (p. 171). There are good reasons why we have moved away from the New England town hall meeting, and Nelson needs to contemplate those reasons.

Although I concur with Nelson’s recommendation to abolish the Forest Service, I think it is an unlikely outcome, and his intermediate or short-run proposal offers only limited benefits. Nevertheless, his book should be required reading for all students of government, not only those concerned with Forest Service policy, because it provides an excellent source in any attempt to understand the consequences of allowing a governmental agency to become so buffeted by competing pressure groups that it loses direction and becomes an even more costly entity.

Ronald N. Johnson
Montana State University
Energy and the EnvironmentEnvironmental Law and RegulationGovernment and PoliticsGovernment Waste/Pork
Subscribe Buy This Issue Get the App