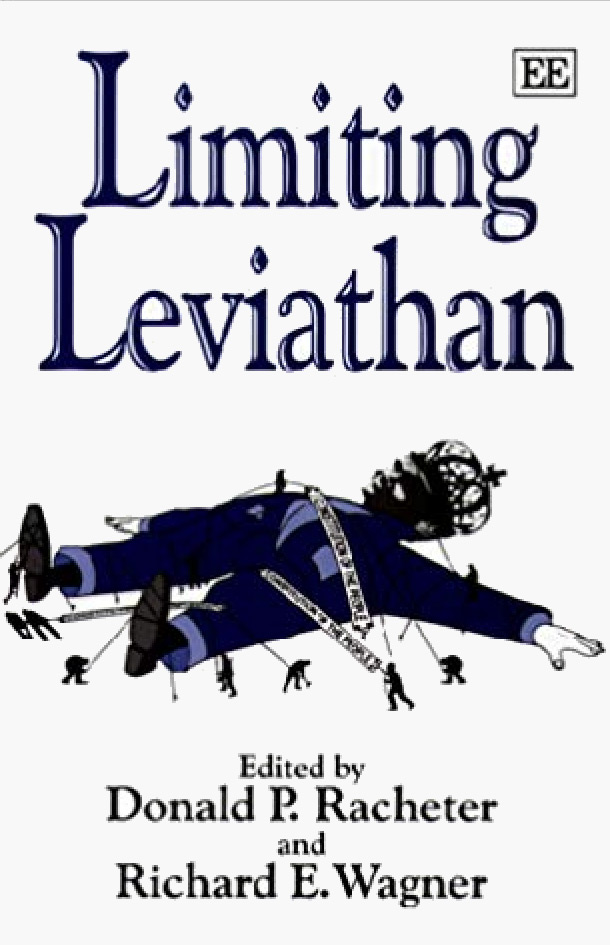 Limiting Leviathan
Edited by Donald P. Racheter and Richard Wagner
Hardcover
This book review appeared in the Winter 2000/01 issue of The Independent Review.

In his book The Limits of State Action, Wilhelm von Humboldt gives a justly famous description of what may be the most important cost of unlimited government:

We must not overlook here one particular harmful consequence, since it so closely affects human development; and this is that the administration of political affairs itself becomes in time so full of complications that it requires an incredible number of persons to devote their time to its supervision, in order that it may not fall into utter confusion. Now, by far the greater portion of these have to deal with the mere symbols and formulas of things; and thus, not only are men of first-rate capacity withdrawn from anything which gives scope for thinking, and useful hands are diverted from real work, but their intellectual powers themselves suffer from this partly empty, partly narrow employment. ( Indianapolis: Liberty Fund, pp. 29–30)

The essayists of Limiting Leviathan examine a number of ways of limiting, controlling, and restricting government. In reading the thirteen essays, I was struck by the tension between two quite different notions of government and by the consequent differences in conceptions of the value and nature of limits.

The first view is in keeping with the Hobbesian-neoclassical notion: government is a necessary evil required to solve the problems of defining and enforcing property rights and of correcting market failures when they occur. According to this view, government is like fire—a valuable, even indispensable tool, but one so dangerous that it requires an insulating container lest it escape and burn down the house.

In the second view, government is conceived simply as evil itself. As the young Edmund Burke wrote, “In vain you tell me that Artificial Government is good, but that I fall out only with the Abuse. The Thing! the Thing itself is the abuse!” (A Vindication of Natural Society, 1756 [1982], 64). This perspective, as well as its implications for the nature of “limits,” is obviously quite different. For those who view government with this perspective, it is not like fire at all. It is more like pollution, either simply harmful or, at best, a by-product of some valuable activity. In any case, we would all be better off without it.

These two points of view are incompatible, and I go back and forth on which is closer to the truth. The essays in Limiting Leviathan go back and forth, too, in a way that is both entertaining and enlightening. The book is an excellent introduction to the various tools and reasons for limiting government.

Although the essays are all strong, the two strongest are Roger Pilon’s general discussion and Eugenia Toma’s review of regulatory limits. In both cases, the writing is first rate, and the conception of limits is general and theoretically sophisticated. Further, Pilon and Toma consider the possibility that the reader might not already be persuaded of the value of limits, something the other essayists often take for granted. Pilon’s detailed analysis of the Declaration of Independence and of the Constitution sets just the right tone for the rest of the book. Toma manages to convey the idea that “regulation” is really a general mechanism for control and transfer of wealth, and therefore it has the potentially most dangerous impacts on society. Her discussion of the structure of regulatory boards and the implications for incentives and accountability is one of the highlights of the book.

Several of the other essays deserve at least a brief mention. Richard Vedder and Lowell Galloway set out to test, or at least to estimate parameters for, the “Armey curve,” which is shaped like the Laffer curve but has income per capita on the Y axis and government spending as a percent of gross national product (GNP) on the X axis. This construct seems dicey to me because if one concedes (as Vedder and Galloway do) that the curve slopes upward for low values of income per capita and relative government size, then the existence of a maximum followed by a downward slope is nearly an accounting identity. Imagine that, using the old Keynesian identity (GNP = C + I + G), the population and G are relatively stable, but C and I fluctuate quite a lot over time. Then it is tautological that GNP/population and G/GNP are inversely correlated. If consumption and investment rise, GNP per capita will rise and government spending as a percent of GNP will fall, and vice versa. This relationship is not especially interesting, and I am not convinced that the implied “optimum” in the Armey curve has any more policy-exploitable information than our old friend the Phillips curve.

William Mitchell compares limited government, as a means to an end, to the often misunderstood “moral” force attributed to the popular will. Mitchell elaborates this distinction, made forcefully by William Riker, along a slightly different line here, emphasizing the bargaining problem that the framers of the Constitution faced: to secure the potential gains, which (nearly) all agreed existed, without making future recontracting and amendment an easy way out of the implicit agreement.

William Pierce makes an important point often left out of the public debate. The “market failure” approach taught to most economics students assumes that (1) cost of government “provision” is zero, or nearly so, and (2) there are no incentive problems in the decision to use public provision in the first place.

In separate essays, Randy Simmons and Randall Holcombe present useful and policy-relevant analyses of the problems of “limits”—in the sense of limiting the government’s power to tax, spend, or regulate—and of the differences between various levels of limits. In particular, the constitutional restriction against “direct” taxes in Article I was eventually changed by the Sixteenth Amendment, but that restriction clearly had a different status than an IRS interpretation of a vague part of the tax code approved by Congress. Both are “limits” of a sort, but their differences are important.

The other two substantive essays, by Dwight Lee (on term limits, in which the author explicitly uses the “pollution” metaphor invoked above) and Gary Anderson (on “direct” democracy, which may be a limit on government or an opportunity for its expansion), are both well done. Lee’s argument is particularly telling, and it is written in the sort of down-to-earth yet incisive way that readers have come to expect from Lee. Anderson gives one of the best comparative discussions of the use of “direct” democracy across nations that I have seen.

The final section of the book raises the question “Are auxiliary precautions needed?” The three essayists—Robert Bish, Bruce Yandle, and Richard McKenzie—take different approaches to the question and arrive at different answers. Bish takes on the problem in terms of “polycentricity,” considering local governments, consumer co-ops, and other organizations as archetypes. Yandle engages the problem as part of a larger, ongoing project, searching for the origins and maintenance of order in the interaction between “formal” and “informal” systems. McKenzie, following up on an earlier book with Lee (Quicksilver Capital [New York: Free Press, 1991]), notes that the notion of a need for “limits” on government is enduring, but the specific limits that can or should be applied may change over time. In particular, enhanced ability to move information and capital across borders has had a number of effects that are only now beginning to be understood. Truly totalitarian states currently have a more difficult job repressing people and keeping that repression secret, and they cannot keep their citizens from knowing about the outside world, thanks to satellite television and the Internet. Paradoxically, the new information technology may facilitate limits on governments, maintaining those limits as well as or better than any of the formal methods traditionally considered.

In sum, this book is first-rate. The summaries and overviews are unusually well done, and the book would work well as a reader or a second text in a variety of courses. It is intended as an introduction and overview, and as such it succeeds admirably.