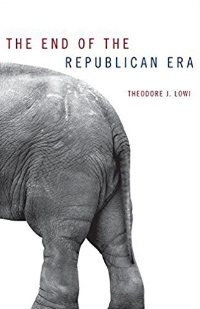 The End of the Republican Era
Theodore J. Lowi
Hardcover Paperback
This book review appeared in the Fall 1996 issue of The Independent Review.

In the fall of 1994, the Republican Party won a majority in both houses of Congress for the first time since the Eisenhower landslide of 1952. Many observers believed that the Republicans had finally achieved the partisan realignment and Republican majority prophesied by Kevin Phillips in the late 1960s. Under the leadership of Newt Gingrich and Rush Limbaugh, the Republicans united three disparate groups: entrepreneurial Republicans, who celebrate the free enterprise system and seek to reduce or eliminate taxes and government regulations; evangelical Republicans, who are shocked by the social decay they perceive around them and hunger for the return of a moral community premised on Christian certitude; and Eurocentric Republicans, who fear cultural relativism in their schools, racial minorities and illegal aliens in their midst, and loss of jobs in the new world economy. Overwhelmingly white and decidedly male in its composition, this alliance has set the tone of contemporary political debate in the United States. It is the nature of this coalition (and its internal contradictions) that Theodore Lowi examines in The End of the Republican Era. In doing so, Lowi traces the birth and possible death of both the current Republican majority and republican government in the United States.

Lowi’s new book is primarily a work of ideological exegesis. Citing Keynes’s famous observation that “practical men, who believe themselves to be quite exempt from any intellectual influences, are usually the slaves of some defunct economist” (pp. 100, 245), Lowi describes the ideological traditions that have dominated American politics and discourse. Striving for intellectual clarity and a rescue of political terminology from the prison of journalistic clichÈs, Lowi begins his analysis by defining “liberalism” and “conservatism” as these terms traditionally have been used by political philosophers, historians, and European intellectuals. He then traces the evolution of classical liberalism in the United States into the New Liberalism that became the dominant public philosophy during the New Deal. When this New Liberalism begat massive government expansion in the 1960s and 1970s, a conservative backlash ensued that, in turn, led to the Republican era of Lowi’s title. This is a complex story, and Lowi believes that its telling requires, first of all, a close examination of the liberal principles on which American constitutional government was originally premised.

According to Lowi, liberalism—as classically viewed from the writings of John Locke, Adam Smith, and Thomas Jefferson—identifies individual freedom as the highest political value. Democratic governments are constituted by autonomous individuals, who act collectively to create political institutions that function to protect individual rights of life, liberty, and property. Government, therefore, is not sovereign; the people are. Government may intrude in the workings of society only to protect the rights of its citizens.

Reprising the arguments of his seminal work The End of Liberalism (2d ed. New York: Norton, 1979), Lowi examines how this traditional understanding of liberalism became Old Liberalism while a New Liberalism emerged from one of the central premises of classical liberalism. Lowi sees the seed of New Liberalism in Old Liberalism’s tenet that government authority is legitimate only when individual rights require protection. As John Stuart Mill argued in his essay, “On Liberty,” “Over himself, over his own body and mind, the individual is sovereign.” Thus, “the only purpose for which power can be rightfully exercised over any member of a civilized community, against his will, is to prevent harm to others” (The Six Great Humanistic Essays of John Stuart Mill, ed. Albert William Levi. New York: Washington Square Press, 1963, p. 135).

Lowi makes the important—and in our judgment accurate—observation that this apparently minimalist view of government actually becomes an open-ended grant of governmental authority once the goal of preventing harm is pushed to its logical extreme. The Great Depression of the 1930s and the constitutional revolution engineered by the Roosevelt administration destroyed the judicial barriers to the expansion of federal power into virtually every aspect of the nation’s economy. This revolution was brought about through judicial acceptance of federal laws that not only expanded federal power but delegated immense authority to judges and bureaucrats. Lowi sees this development as an understandable response to the crisis of the 1930s, but he views its subsequent continuation as unnecessary and undesirable. This New Liberalism, with its totalitarian concern for the prevention of injury wherever it might occur, led to the development of the massive but irresponsible and ineffective federal government (dominated by well-organized interests) that Lowi described so memorably in The End of Liberalism.

In The End of the Republican Era, Lowi goes beyond the analysis of his earlier work by demonstrating how the crisis of liberalism in the 1960s and 1970s led to the emergence of conservatism as a national political force. He explains this process through a skillful analysis of contemporary American conservatism and its roots in the American historical experience. Lowi sees American conservatism as something of an anti-ideology that eschews rationalism and systemic inquiry and instead celebrates the authority of tradition, community, and religious absolutes.

Brilliantly refuting the influential thesis articulated by Louis Hartz in his Liberal Tradition in America (New York: Harcourt, Brace & World, 1955), Lowi argues that liberalism is not the only American ideological tradition, but has always coexisted with an invisible (to academicians) but equally influential conservative tradition. Lowi attributes the invisibility of conservatism to the federal political structure of the United States, which enabled pursuit of traditional liberal ideals at the federal level while allowing implementation of conservative agendas at the state and local levels. Liberalism was institutionalized nationally with the ratification of the Bill of Rights in 1791, but these rights were not systematically extended to the states until activist judges began to do so in the 1960s. Thus, federalism allowed for a national government that preserved the rights and freedoms necessary for the development of a capitalistic economy and the prevention of a national police state, while reserving police and regulatory powers to the states, which could enforce restrictions on personal freedom in the name of community norms and religious truth. Because of its provincialism and its influence primarily among the uneducated, conservatism was viewed by the academy as an anomaly, a movement irrelevant to the real and central liberal tradition of America.

However, conservatism became a national movement when New Liberalism’s expansion of government encroached on the local police powers exercised by conservatives. The commitment to the prevention of injury, so cherished by New Liberals, led to the nationalization of the protection of individual rights. In accordance with the tenets of New Liberalism, activist courts and government agencies enforced these rights to minimize harm to racial minorities, women, atheists, homosexuals, and even flora and fauna, enraging conservatives in the process. As New Liberals encroached on their parochial powers, conservatives nationalized their movement by uniting with Old Liberals against their common enemy, the activist federal government.

Lowi is correct in giving Ronald Reagan immense credit for the construction of this alliance between Old Liberals and conservatives that elected Reagan twice and gave Republicans control of Congress in January 1995. By focusing his followers’ attention on the evils of the existing national government while exercising his unique gift for the delivery of oxymoronic platitudes, Reagan forged a coalition of freedom-loving Old Liberals and freedom-loathing conservatives that has survived his presidency.

Lowi sees this coalition as fundamentally flawed, because it attempts to reconcile traditions that are in direct opposition to one another. He sees the unification of Old Liberals (who support unrestrained capitalism, secular government, and individual rights) with conservatives (who distrust capitalism, support Christian government, and put community order above individual liberty) as contradictory. And he sees this contradiction as the beginning of the end of the Republican majority in the United States, an insight that gives The End of the Republican Era its title. However, Lowi’s title is a pun because he also argues that contemporary conservatism is a threat to American republicanism, as its tenets are in opposition to the principles of majority rule and individual rights enshrined in the constitution.

In our judgment, Lowi is correct in his conclusion that populist conservatism is a threat to liberal rights because it acknowledges only the authority of God, scripture, tradition, and community norms. However, in identifying this contradiction and demonstrating how fragile the Republican coalition is, Lowi undermines his own assertion, which he never plausibly explicates, that the Christian Right is a genuine threat to American democracy. Lowi tells us first that extreme conservatives have gained national power by uniting with Old Liberals, then that the alliance between the two groups is bound to disintegrate. He fails to identify how conservatives will subvert the democratic process when they are stripped of the power of the Republican coalition. Nevertheless, even if his title is hyperbolic in its implied alarm over the fate of the republic, Lowi is entirely correct in demonstrating that the Republican coalition is an ideological muddle unlikely to yield effective and coherent public policy.

Lowi’s concluding chapter is appropriately titled “Restoring the Liberal Republic.” Echoing The End of Liberalism, Lowi argues that the path out of the ideological confusion and republican disintegration promoted by both New Liberalism and contemporary conservatism is a return to rule by law, that is, the clear drafting by Congress of statutes that avoid vague language, ambiguous goals, and the delegation of power to judges and bureaucrats. If Congress embraces the principle of rule by law, it can regain its accountability to the electorate and respect for the boundaries essential to constitutional government.

Lowi’s recommendations are sensible and desirable, but they fail to provide a comprehensive strategy for dealing with the contemporary American crisis. By focusing on ideologies and the philosophical traditions from which they developed, Lowi presents a brilliant, useful, and often original analysis that makes a significant contribution to a better understanding of a political debate often lacking minimal intellectual coherence. However, The End of the Republican Era lacks the systematic analysis of the realities of historical change, social structure, and economic interests that made The End of Liberalism an instant classic. Perhaps it is unfair to critique an important book for not being a great one, but Lowi’s text does not meet the promise of its title or the publisher’s jacket description of the work as a true “sequel to his most renowned book, The End of Liberalism.”