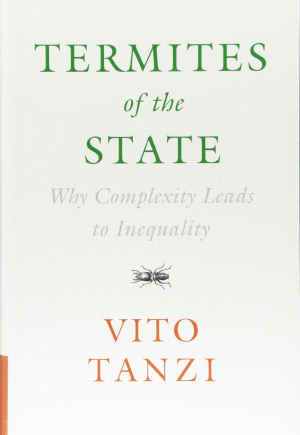 Termites of the State
Why Complexity Leads to Inequality
By Vito Tanzi
Kindle Hardcover
This book review appeared in the Spring 2019 issue of The Independent Review.

Vito Tanzi’s Termites of the State uses the image of termites eating away at the foundations of what was once a liberal republic. For millennia, political theorists have averred that liberal republics are but temporary forms of governance, for sooner or later they morph into something else as people come to learn how they can live at someone else’s expense. Benjamin Franklin surely had such a transformation in mind when, in responding after the Constitutional Convention to a woman who asked him what sort of government the delegates had created, declared: “A republic, if you can keep it.” To be sure, transformations can occur quickly or slowly, but they would be transformations in any case. A relatively slow transformation, however, can easily be mistaken for stasis. For instance, two people standing a mile apart on a globe but each of themmoving due north will eventually be able to shake hands. Recurring to Franklin, a republic founded on individual liberty and a rejection of all things feudal can morph into a new formof feudalismwith new forms of status, duty, and obligation without that transformation being much noticed.

Modern thinking holds that cancer emerges through a cellular process that has gone awry. Should a process of transformation entail a once liberal republic losing its liberality, a societal form of cancer will have resulted. Tanzi’s title points toward possible recognition of a concept of societal cancer that emerges through the internal working of some governing apparatus. If we pursue that possibility, some of the intuitions held by the ancients might be affirmed with the use of temporary tools and techniques of thinking. But Tanzi doesn’t do this. He can’t, for he is an equilibrium theorist. Any explanation of societal transformation requires some theory grounded in the internal generation of change, rendering it a variety of spontaneous-order theorizing. This kind of theory is opaque to an equilibrium theory. Tanzi can assert the existence of termites, but their existence is an assumption of his model and mode of thinking. Truly to explain termites requires a theory that can account for their emergence.

Tanzi can’t explain how termites come into existence from a position where previously they had not existed. Nor can he explain their patterns of location, their growth, or anything else that entails development through time. These types of explanation are the domain of process-oriented theories that seek to capture the internal dynamics through which change emerges. Although Tanzi doesn’t seek to explain transformation as against asserting its presence, he is a masterful collector of data and observations. Someone interested in theorizing about internally generated transformation will find many observations in his book that provide material that could be incorporated into a process-oriented scheme of thought.

In thinking about matters of political economy, we must remember that the objects about which we theorize are not themselves open directly to observation. No one has ever seen the objects we repeatedly denote as “market” or “state.” Sure, we all have seen stores, shops, and factories—many of them. And we have also seen numerous governmental office buildings and associated personnel. But those are just particular manifestations of the terms market and state, which are just abstract nouns to which any assignment of properties will sometimes be helpful and other times be misleading. We apprehend these abstract nouns not by observing them but by constructing theories about them. Those theories might provide good insight into some aspects of those objects, but they can also be misleading or even wrong.

Being an equilibrium theorist, Tanzi thinks in terms of “before and after” or “then and now” states of existence. His equilibrium societal architecture entails two entities, which he denotes as “state” and “market.” When expressed as ideal forms, “market” conforms to the theory of perfect competition, and “state” conforms to Paul Samuelson’s description of optimality in the supply of public goods (“The Pure Theory of Public Expenditure,” Review of Economics and Statistics 36 [1954]: 387–89). Neither of these abstract nouns yields an accurate description of reality. For Tanzi, it is this gap between ideal and actual that provides space for termites, which he defines as “various elements that enter into the political system and that corrupt, or distort, the legitimate economic role that governments try to play” (pp. 119–20). Tanzi maintains descriptive symmetry by introducing “termites of the market, which distort the legitimate functions of the market” (p. 120). The work of termites might not be so dramatically destructive as the work of cancerous cells, and yet termites can bring down any structure on which they feast.

Two points about Tanzi’s treatment of termites are especially notable in the preceding quotation. The first point is Tanzi’s reference to termites as being acting entities. This is impossible. Some person or persons must insert termites into the political process. They can’t enter on their own. By failing to attribute action to relevant acting entities, Tanzi is effectively theorizing in the passive voice, as any equilibrium theorist must. In contrast, a process-oriented theory must entail people who plan and act, with those actions culminating in the emergence of what Tanzi describes as termites. Where for Tanzi termites simply enter into state and market and do their work, a process-oriented theory would start by recognizing that termites can’t just enter into a social system. Either they were present at the beginning, or they were created and inserted later by someone. As for why someone might insert termites, it must be that the inserter thinks this insertion will create an opportunity for gain. Tanzi’s equilibrium framework enables him to describe the work that termites might do, but it prevents him from explaining where those termites come from.

The second point is that Tanzi starts by presuming there is some objectively given list of functions for markets and states to pursue within their respective domains. Getting more explicit, Tanzi holds that the appropriate size of the state is between 30 and 35 percent of gross domestic product (GDP) (p. 121). He continually illustrates his arguments by referring to macrolike or system-level observations, in conjunction with treating those observations as objects of choice when they are not. There is no point at which system-level observations are products of choice. No one chooses a rate of growth in GDP or a Gini coefficient for the distribution of income.

System-level macrotheories embrace a pretense of knowledge in treating systemlevel characteristics as objects of choice when they are in fact emergent resultants of complex patterns of human interaction. This pretense of knowledge holds as fully for those macrotheories that seek to create microfoundations by reducing a society to a representative individual (see, for instance, Richard E. Wagner, “A Macro Economy as an Ecology of Plans,” Journal of Economic Behavior and Organization 82 [2012]: 433–44, and Paul Lewis and Richard E. Wagner, “New Austrian Macro Theory: A Call for Inquiry,” Review of Austrian Economics 30 [2017]: 1–18) as for those theories that don’t bother with microfoundations. Macrolevel observations, of any type and not just the conventional macro-observations, are derivative variables and are not direct objects of choice. Sure, governmental actions can influence rates of growth and distributions of income, but so can individual actions; moreover, to influence something is not the same as choosing or creating it. Without an explanation of how and where termites arise, there is no way systematically of counteracting the expansion of the termites. The only recourse is some ad hoc, historicist-centered response. In this respect, many economists these days seem to presume that data can speak for themselves. But they can’t. Data must be organized before they carry speech, and organization is a product of suitable theory, with suitable theory in turn being theory that is able to generate what has been observed from some preceding state where it had not been observed (see, for instance, the essays collected in Joshua Epstein, Generative Social Science [Princeton, N.J.: Princeton University Press, 2006]).

Tanzi’s economic theory is conventional equilibrium theory of an imperfect competition variety and with the degree of imperfection increasing with the passing of time due to the growing complexity to which his subtitle refers. For Tanzi, increased complexity makes the distribution of knowledge less equal as the world comes to be one where a knowledgeable few dominate an ignorant many. This situation allows termites to breed. Tanzi asserts this prospect without explaining it. On this very topic of an asymmetric distribution of knowledge, moreover, Edward Stringham has used historical cases to illustrate how an asymmetric distribution of knowledge creates profit opportunities for people who can develop commercial practices and arrangements that neuter any termites (Private Governance: Creating Order in Economic and Social Life [Oxford: Oxford University Press, 2015]). The simple fact of the matter is that any claim that market failure is present simultaneously is a recognition that profit opportunities can be captured by overcoming that failure through the imaginative creation of new forms of contract, enterprise, or commercial practice. There is little to nothing that political entities can do to exploit such profit opportunities that individuals can’t exploit through market-compatible devices. There is, however, much that political entities can do to impede such exploitation by individuals, to say nothing of sheltering some individuals from other individuals’ superior competitive efforts.

What is missing in Tanzi’s work is some robust notion of agency whereby interactions among acting agents are continually at work in generating and transforming patterns of the social living together through which societies are constituted. Tanzi’s bifurcated architecture of market and state doesn’t fit our present situation at all and probably never has, as Jonathan Hughes pointed out in noting widespread market–state comingling in the colonial period (The Governmental Habit Redux: Economic Controls from Colonial Times to the Present [New York: Basic Books, 1977]). In 1933, Frank Knight noted in his book The Economic Organization (Chicago: University of Chicago Press) that any economic theory must explain what is produced, how it is produced, and for whom it is produced. In 1936, Harold Lasswell said much the same thing about political theory in his book Politics: Who Gets What, When, How (New York:Whittlesey House).

Market and state are abstract nouns that do convey some meaning, sometimes with reasonable accuracy and sometimes not. When one speaks of markets working or failing to work, meaning is conveyed poorly because it is nonsensical to describe markets as working or failing. Market is simply an abstract noun that covers numerous forms of interaction among individuals and the organizations those individuals create. It is equally misleading to describe states as correcting market failures or as creating them. Neither states nor markets are acting entities. It is always people inside those entities who act. We may very much doubt, moreover, that all actors within any organization are following the same script. What needs to be provided to understand the growth of termites, assuming Tanzi is correct about their growth, is an understanding of how termites emerge from a setting in which they had not existed or were only sparsely present.

For purposes of theoretical exposition, it is often useful to work with abstract concepts. But action is concrete and not abstract. Tanzi is a master at capturing details to illustrate points he wants to make, and this book illustrates that quality robustly. Although Tanzi hooks his narrative onto a conventional model of economic equilibrium where the market is imperfectly competitive and the state sometimes is overwhelmed by its corrective challenges, he nonetheless has assembled a wealth of illustrations in constructing his narrative. Those myriad illustrations could surely provide useful ingredients in an effort to probe the kinds of intuitions Jane Jacobs sketches in Dark Age Ahead (New York: Random House, 2004), where she probes some possible contours of cancerous regime changes as contrasted with those that are beneficial.