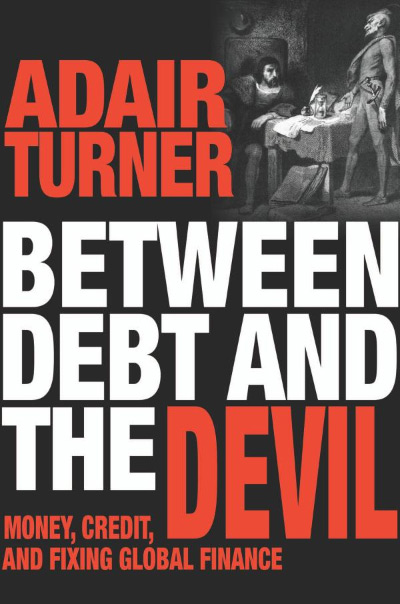 Between Debt and the Devil
Money, Credit, and Fixing Global Finance
By Adair Turner
Kindle Hardcover Paperback
This book review appeared in the Spring 2017 issue of The Independent Review.

Between Debt and the Devil analyzes the problems of our financial system and offers advice to “fix” the system. It is one of many books published since the onset of the Great Recession that recognize that there is something rotten in the current state of finance. Adair Turner’s account of the crisis is fascinating for several reasons.

First, as a director of a major bank and after the fall of Lehman Brothers as chairman of the U.K. Financial Services Authority, Turner was on the front line during the past boom. He contributed to the global financial reform in platforms such as Basel III.

Second, he is highly critical of the precrisis orthodoxy.

Third, he is eclectic. In response to the failure of the orthodoxy in foreseeing and explaining the crisis, he mixes ideas from John M. Keynes, Friedrich A. Hayek, Thomas Piketty, Richard Koo, and others.

Fourth, in spite of Turner’s criticism of the precrisis orthodoxy, the book itself presents the postcrisis orthodoxy. The first two people the author thanks in his acknowledgments are George Soros, founder of the Institute for New Economic Thinking, which supported Turner, and Martin Wolf, famous columnist of the Financial Times. Unfortunately, Turner’s eclectic potpourri of incoherent theories and especially his adherence to crude Keynesian thinking impedes him from advancing to the heart of the problem and drives him to embrace detrimental policies.

His description of the problems of our financial system and its symptoms is mostly illustrative. He describes the growth of the financial sector from 1970 on, when it started to expand faster than the rest of the economy. He also draws a link between the financialization of the economy—that is, the rising share of the financial industry in gross domestic product and overall trading—and an increase in economic inequality. This link is quite relevant because Thomas Piketty in his famous study on inequality does not look at financialization or the role of the financial system as a cause for an increase in inequality (see Capital in the Twenty-First Century, trans. Arthur Goldhammer [Cambridge, Mass.: Harvard University Press, 2014]). Rather, Piketty has another explanation for the increase in inequality—namely, that the return on capital, r, tends to be higher than the economic growth rate, g. Turner makes the important point that “superior access to credit in volatile economic circumstances has often been crucial to the accumulation of large fortunes” (p. 122). Whereas the super-rich have relatively easy access to newly created money in the form of new loans, the poor have less easy access to low-rate loans except in dangerous boom times. One wonders why Turner, who dates the start of financialization in the 1970s, fails to link it with the end of Bretton Woods, the last remnant of the gold standard.

Turner also makes important points in his critique of the precrisis orthodoxy that show the lack of realism in modern finance assumptions, such as those underlying Value at Risk models or the efficient-market hypothesis. He even reaches the conclusion that price-level stabilization policies conducted by central banks do not guarantee economic and financial stability. Rather, the amount of credit created should be of concern. Hayek had reached a similar conclusion already in the 1920s (“Das intertemporale Gleichgewichtssstem der Preise und die Bewegungen des ‘Geldwerts,’” Zeitschrift für Volkswirtschaft und Socialpolitik 5 [1928]: 25–63, 254–317).

Also accurate is Turner’s description of new financial technologies such as securitization. He points out that real estate lending has especially risen since the 1970s. One reason for the increase in real estate loans and indebtedness mentioned by Turner is the tax system. Interest expenses on family houses are tax deductible. Businesses may deduct interest expenses, although they cannot do the same with dividends. The tax system thereby disadvantages equity finance vis-a`-vis debt finance, and Turner’s proposal to end these policies makes sense.

Turner’s analysis has four major flaws, however, all of them connected with faulty theories.

First, Turner fails to reach the crux of the problem of our financial system, which is government intervention in the form of privileges given to banks to create new loans unbacked by real savings. Credit expansion of fractional reserve banks may cause unsustainable investments, creating a boom that sooner or later reverts into a recession. Credit expansion implies the creation of new debts and increases overall leverage. Thus, the overindebtedness and overleverage that Turner repeatedly points to are just symptoms of the problem but not its root, which is unbacked credit expansion orchestrated by expansive central banks.

Similarly, the increase of real estate lending vis-a`-vis ordinary business loans is not the real problem. Credit expansion to finance financial and real estate speculation or even gambling in a casino is not so harmful as unbacked ordinary business loans, at least in the beginning. Of course, the bets in the casino will rise. But the real problem starts when people take the new money out of the casino to spend it in the real economy—thus distorting prices. While prices are bid up in the stock or real estate market, the newly created money initially stays there, so distortions are limited. But at some point stockholders will sell to enjoy their profits, and initial public offerings will take advantage of higher stock prices, as Fritz Machlup explains in The Stock Market, Credit, and Capital Formation (New York: MacMillan, 1940). When the newly created money is spent in the real economy to finance new investment unbacked by real savings, an unsustainable boom ensues. In contrast to loans that buy already existing assets, the expansion of credit to business unbacked by real savings causes distortions from the very beginning in the real economy.

Second, Turner believes that “[m]oney is different from other commodities, goods or services, and neither the economic nor the political arguments in favor of free markets apply to money” (p. 190). However, financial markets are not free markets. Banks have received the privilege to create money, which violates the general legal principles governing the deposit contract, as shown in Jesús Huerta de Soto’s book Money, Bank Credit, and Economic Cycles (Auburn, Ala.: Ludwig von Mises Institute, 2009). Central banks are manipulating interest rates and money creation. Explicit and implicit guarantees for banks, legal tender laws, and an intricate web of regulations make the banking system and financial markets closer to central planning than to a free market.

Turner likes to cite Hayek and his idea of a fatal conceit, yet he misapplies Hayek’s idea when he maintains that it is a conceit that a “free market will always deliver optimal results” (p. 249). Hayek criticized the idea that governments might improve on the results that occur when individuals interact using their private knowledge. Turner falls into this very conceit when he wants to improve regulations and steer economies through government action out of a recession. He is guilty of another fatal conceit when he claims that there can be too much finance or trading in a free market. How can he know? What is the standard? Subjective valuations determine whether a trade is made or not. Turner bases his argument on Joseph Stiglitz’s Nobel Prize lecture (2001), which argues that trade in goods is driven by a difference in preferences, whereas financial trade is driven by expectations. However, different subjective preferences also underlie financial trades. And who is to decide objectively which trade is socially good or necessary? It seems that Turner and Stiglitz, by force of their arguments, want to close casinos.

Third, Turner subscribes to the Keynesian thinking that the Great Recession was due to a lack of aggregate demand. Quantitative easing and zero-interest-rate policies would have helped to uphold aggregate demand, yet demand is never a problem. People always want goods. Another question is if people produce the right things to be able to buy the goods they want. There can be a misalignment of the structure of demand and the structure of supply that free-market forces correct if left alone. Hoarding in this context is a form of protest against a structure of supply that does not produce what people most urgently want to consume or to invest in. Expansive monetary and fiscal policies slow down this adjustment process by propping up a distorted structure of supply.

Fourth, due to this faulty theory, it is no surprise that Turner’s policy prescriptions are inappropriate. He dismisses the gold standard and 100 percent reserve banking, citing only the Chicago plan but neglecting the Austrian 100 percent proposal. The latter differs in important aspects from the former, as Romain Baeriswyl has pointed out (“Intertemporal Discoordination in the 100% Reserve Banking System,” Procesos de Mercado: Revista Europea de Economía Política 12, no. 2 [2015]: 43–80). Turner wants tighter macroprudential regulation and more redistribution of wealth and income, yet these proposals only indirectly attack the problem and, at best, alleviate some symptoms. His final proposal is to print money directly to finance government deficits, hand it directly to people, or cancel government debts, yet central banks are already more or less directly financing government spending. Moreover, a larger public sector channels resources away from the needy private sector and is a tax on recovery.

In sum, Turner’s book on financialization contains many important parts of the puzzle but is unable to put them together due to the lack of a coherent theory.