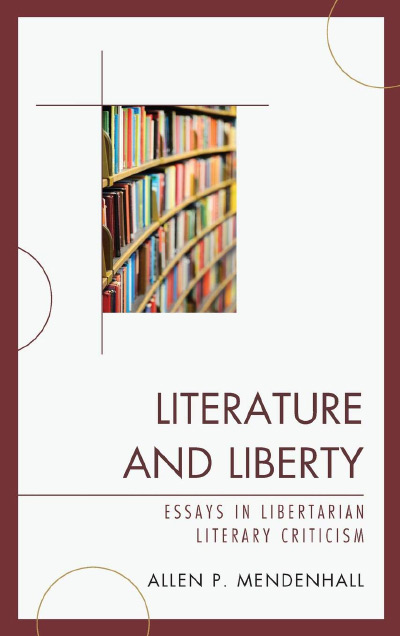 In the final paragraph of his introduction to Literature and Liberty, Allen Mendenhall clearly outlines the project of his book: “This book shows libertarians that the humanities in general and literature in particular can serve as useful, illuminating sources for studying economics and human action” (p. 22). I agree with Mendenhall that such a project is a useful and necessary one with enormous potential gains from trade for both economics and literary studies. And, on the whole, I like Literature and Liberty. But although the book does some very interesting things, it does not seem to me to accomplish what its author says he set out to do.

What Mendenhall has given us is an interesting collection of essays on law and literature, occasionally spiced with a libertarian take on perennial problems such as the status of the individual and the representation of capitalism in literary texts. But it does not give us a libertarian literary theory, nor does it give us examples of that kind of theory. For example, the essay “Liberty and Shakespeare” is not a discussion of liberty in Shakespeare. It is, instead, an extended and interesting history of the discipline of law and literature as well as the discipline’s continuing fascination with Shakespeare’s plays. He argues that the history of law and literature—in particular its treatment of Shakespeare—is evidence that we need “sound scholarship (as opposed to enthusiastic appropriation)” (p. 41), a point with which any Shakespeare scholar will agree, while also pointing Mendenhall to the recent book Shakespeare and the Law: A Conversation among Disciplines and Professions, edited by Bradin Cormack, Martha C. Nussbaum, and Richard Strier (Chicago: University of Chicago Press, 2013). Mendenhall’s review of the law and literature scholarship is well done and useful, and I am particularly appreciative of the essay’s closing argument about the importance of aggressively interdisciplinary, collaborative, coauthored works as a way of revivifying the academy. “We must step outside of our comfort zones. Disciplinary impediments serve to restrain intellectual production by blocking channels of communication and by shutting down access to much needed resources—most notably experts in other fields” (p. 47). It is a good piece, but it is about law and literature, not about liberty.

Similarly, Mendenhall’s essay on E. M. Forster’s A Passage to India promises to examine both law and liberty in the novel, but it becomes so caught up in the discussion of law than the promised discussion of liberty falls by the wayside. Again, the essay is an interesting one, highlighting Forster’s contrasting of British and Indian legal norms. As Mendenhall notes, Forster “contrasts the coercion and compulsion of rule of law to the emergent orders attendant on Brahman Hinduism” (p. 52). Some close attention to definitions would have aided the essay at this point. “Brahman Hinduism,” which Mendenhall allows to be an “odd construction,” is left undefined, which makes the details of the contrast with British law somewhat obscure. And Mendenhall seems to occlude distinctions between concepts such as “rule of law” and “common law” and “British law as enacted in India” when clarity would have aided his case.

“A Tale of the Rise of Law,” which considers Geoffrey of Monmouth’s History of the Kings of Britain, is another law and literature essay. This essay, I think, might have benefitted from a more substantial grounding in medieval intellectual history. Mendenhall’s assertion that “[o]ne could make the case that mythical thinking about law was more consequential in the twelfth century than in the eighteenth century simply because of the various claims to sovereign authority in the twelfth century” (p. 97) silently passes over the importance of the distinction between pre–Magna Carta legal thought and legal thought in the Age of Reason. Mythical thinking was more consequential in the twelfth century because it was one of the primary modes of thought for that century, not because of disparate claims about sovereignty.

Again, in “Literature, Trans-national Law, and the Decline of the Nation-State” Mendenhall is at his best in his discussions of law and of ideology and deals only very sparingly with literature. He makes a valuable argument at the close of the essay, however, that the word capitalism has been invested with new meaning and “stands for different concepts within different sociopolitical settings. Some hear capitalism and think ‘oppression’ and ‘exploitation’; others hear capitalism and think ‘freedom’ and ‘prosperity.’ . . .We will continue to suffer from confusion and anger until literary Marxists and free-market economists become conscious of these contradictory meanings” (p. 137). It would have been nice, though, to see how that argument over capitalism is evidenced in literary texts rather than just in critical works.

Thus far my main quibble with Mendenhall’s book is that although it is interesting, it does something other than what Mendenhall tells us it will do and other than the title implies. However, at least one other essay in the book is substantially more problematic. When Mendenhall considers Mark Twain’s The Adventures of Huckleberry Finn and the ruckus raised by the recent edition that replaced Twain’s use of the word nigger with the word slave, he makes an argument any serious literary scholar will appreciate and respect. He writes, “Of course the novel is problematic— American history is problematic—but erasing problems of the past will do little to aid our understanding of history and culture in the present and the future. In light of the number of scholars working at the intersection of race and culture, America today hardly risks, as it once did, suffering from historical amnesia with regard to race. But bowdlerizing texts could affect the way we remember racial history. . . . Editing [the word nigger] out of Huck Finn, however understandable and well-meaning the effort may be, simply removes the book from its social and historical context” (p. 113). He also notes that with the editing of the language, the novel’s message is softened because “this little touch-up risks masking the racial tension in the novel and in the culture that influenced Twain. The deepest understandings come from investigating tensions. Even Huck learns that, as he challenges racism in subtle and nuanced ways” (pp. 114–15).

The problem, however, is that throughout this ringing defense of adhering to Twain’s original language, keeping the “fraught diction intact” (p. 115), and respecting the reader’s ability to cope with the texts, Mendenhall refuses to use the word nigger in his discussion, instead using “the n-word” throughout. This timid boldness undercuts his argument substantially. If words are nothing to fear, and if frank discussion matters, why obfuscate? If the word is so unbearably offensive that it cannot be mentioned even in a discussion about its offensiveness, then why object to the bowdlerized Twain? Toward the end of this essay, Mendenhall quotes Thomas Sowell as saying, “[R]ace is too important to be ignored or—worse yet—to think about only in the same conventions and evasive phrases of our time” (p. 117). One wishes that Mendenhall himself had been brave enough to follow this excellent advice.

I applaud the interdisciplinary agenda and the wide-ranging texts Mendenhall considers as well as his desire to focus on issues of economics, liberty, and law in his work. But I wish that he had fulfilled the promises he makes in the book’s introduction. There is value here, and there is work of interest. It is just not the work we are told we are about to read.