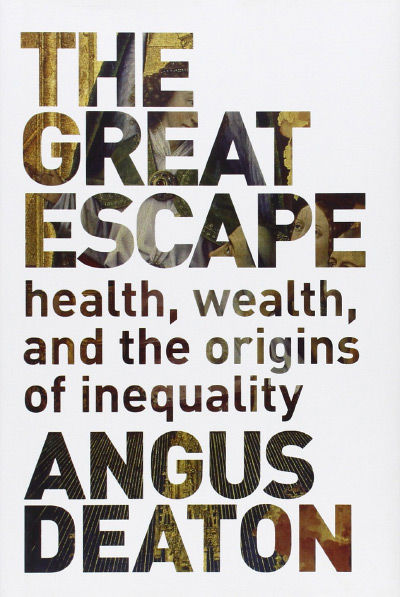 The Great Escape
Health, Wealth, and the Origins of Inequality
Angus Deaton
Kindle Hardcover Paperback Audiobook MP3 CD
This book review appeared in the Fall 2014 issue of The Independent Review.

Angus Deaton’s The Great Escape: Health, Wealth, and the Origins of Inequality is a positive and optimistic assessment of worldwide well-being. Yet it is also a sobering book because it identifies problems and vulnerabilities. It brings together two important elements of well-being: health and prosperity. It is about “the endless dance between progress and inequality, about how progress creates inequality, and how inequality can sometimes be helpful . . . and sometimes unhelpful” to progress (p. xiii).

The book’s perspective is global, though several chapters focus on the United States. It is organized into three parts: “Life and Death,” “Money,” and “Help.” The first two are self-explanatory; part 3 is mainly an argument that most foreign aid is doing more harm than good.

In spite of the fact that “the world is hugely unequal,” “life is better now than at almost any time in history” (p. 1), and the book is about the interplay between progress and inequality. The global inequality of today is largely the creation of modern economic growth. Health progress creates inequality in health just as economic progress creates economic inequality.

Chapter 1 is a descriptive treatment of well-being in the world. Health and wealth are strongly, though not perfectly, correlated among the world’s countries. The relationship between income and life expectancy at birth is positive but nonlinear. Life expectancy rises very steeply with income up to about $10,000 gross domestic product (GDP) per capita (in price-adjusted 2005 U.S. dollars) and then flattens. This is the epidemiological transition point at which the causes of most deaths shift from infectious to chronic diseases.

Deaton is largely agnostic on the causality of income and health other than to say that for nutrition people need money, and for sanitation governments need money. He reports that proportional increases in income are associated with constant increases in longevity. There is improvement over time in both health and income, but with some catastrophic interruptions such as the Great Leap Forward in China from 1958 to 1961, which caused some 35 million deaths, and the HIV/AIDS epidemic.

The improvements in health are due to both income and practical knowledge, and Deaton argues that knowledge is central and that income is a facilitator of other aspects of well-being. He contends that although there is not a necessary connection between economic growth and poverty reduction, in fact much of the reduced poverty in the world is due to economic growth in the world’s two largest countries, China and India.

The discovery and diffusion of the germ theory of disease were central to the reduction of infectious disease and child mortality. This basic knowledge quickly became available throughout the world, but implementing the knowledge was not automatic. For example, preventing diseases now understood to be caused by waterborne agents first required construction of safe water supplies. “Turning the germ theory into safe water and sanitation takes time and requires both money and state capacity; these were not always available a century ago, and in many parts of the world they are not available today” (p. 97).

Deaton presents a challenge: Why should children in poor countries die when they would not die if they were born in rich countries? Economic growth can bring health improvements, but Deaton uses China to show that “growth does not bring any ‘automatic’ improvement in the health component of wellbeing. In China, it was policy that mattered: in effect, the authorities decided to trade off one aspect of well-being for another” (p. 116). In fact, he argues that “there is no relationship at all” between the speed of growth and the speed of decline in infant mortality when the data are analyzed by country (p. 118).

There is a good discussion of disagreements on how much health care is too much. The trade-offs between health and other spending are usually not well understood in the United States because many people do not realize that what their employers pay for their insurance would otherwise come to them in wages. Deaton calls for a process that allows the public to understand the ways in which income and health interact and the ways that growth of health spending affects other aspects of well-being.

Deaton documents the economic growth and rising standard of living in the United States and their sources in appropriate institutions and practices. He shows how these things make life better even though they don’t make Americans proportionately happier. He documents the slowdown in per capita growth in GDP and the limitations of using GDP to measure well-being.

How does inequality arise? Deaton claims that it is the product of many different mechanisms. One major source of inequality is the increasing demand for technological skills. This kind of inequality is “part of a system that is raising living standards for everyone” (p. 193). Deaton argues that even equality of opportunity “does not assure outcomes that are transparently just. . . . There is a deep conflict between incentives and inequality, in families and in countries” (p. 194).

Deaton is very concerned about rising inequality in the United States and discusses its political sources and dynamics—from the minimum wage to the tax code to financial deregulation and the lobbying of Congress. “The ‘too big to fail’ promise and the hundreds of millions in earnings that it allowed was [sic] a failure of government regulation” (pp. 210–11).

The best news in this book is the globalization of prosperity since World War II. Hundreds of millions of people have risen from poverty and destitution. Yet while rich countries continue to grow and their average incomes to converge, the experience of all the world’s countries is much more diverse. Several countries (China, Hong Kong, Malaysia, Singapore, South Korea, Taiwan, Thailand, and Botswana) have grown at more than 4 percent a year between 1960 and 2010, making for a sevenfold increase in average incomes. But many countries have not grown at all, and some (Central African Republic, Democratic Republic of the Congo, Guinea, Haiti, Madagascar, Nicaragua, and Niger) are actually worse off than they were fifty years ago. Yet because the world’s two largest countries are among the fast growers, the average person in the world is better off than the average country (pp. 234–35).

This is mainly good news (though it could obviously be even better), but we do not really understand much about how it has happened. “There is much that remains mysterious about why some countries grow rapidly and some grow slowly” (p. 237). Deaton is rightly critical of efforts to advance our understanding by looking at successes or failures and seeing what each has in common with the others.

The most controversial part of the book is surely the single chapter in part 3 titled “How to Help Those Left Behind.” The chapter explains the “aid illusion”— “the erroneous belief that global poverty could be eliminated if only rich people in rich countries were to give more money to poor people in poor countries” (pp. 269–70). This “hydraulic” approach to aid is wrong. “Fixing poverty is nothing like fixing a broken car or pulling a drowning child out of a shallow pond” (p. 274). I find the chapter comprehensive, enlightening, and convincing. We are left with the conclusion that “both theory and experience suggest that economic growth is the surest and most lasting solution to poverty” (p. 281).

Knowledge and ideas are also central to economic growth, but the causal pathways are not nearly so clear, and, as Deaton acknowledges, we do not know enough about how to make growth happen.

The Great Escape is a readable and fair-minded book. My complaints are few and based largely on expectations that Deaton has raised with the wealth of information he presents. I regret that a scholar of such knowledge and experiencedid not attempt more precise and comprehensive statements of the relationship between progress and inequality in general or of the relationship between health and prosperity.

As Deaton says, the world has never been better than it is now (at least in terms of life expectancy and material well-being). But we know more about how we got to this situation with respect to longevity than we do with respect to prosperity. Both advances may be fragile. The HIV/AIDS epidemic and the reemergence of polio and tuberculosis show that change is not monotonic and that we must be on guard against setbacks. But we understand less about how we got to the present advanced state of world prosperity than we do about how infectious diseases were conquered. When shocks such as the recent financial crisis and the Great Recession occur, we are less well prepared to re-create the state of economic progress the world had achieved up to that point.