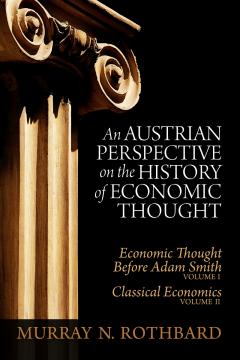 An Austrian Perspective on the History of Economic Thought
Murray N. Rothbard
Kindle Hardcover Paperback
This book review appeared in the Fall 1996 issue of The Independent Review.

In Rothbard’s account, Adam Smith tumbles from his pedestal as the founder of economics and becomes someone who ignored many of the achievements of his predecessors and set the discipline on a misguided course from which it took a century or more to recover. David Ricardo came after Smith and went even farther in the wrong direction that Smith had taken. After Ricardo’s death, the community of economists quickly discerned Ricardo’s errors and repudiated most of his theoretical contributions. But the immense authority and prestige of John Stuart Mill, who in his early teens had imbibed Ricardo’s ideas in large doses from his father, restored Ricardo and the so-called classical tradition to its wholly undeserved and pernicious position of influence.

The basic classical error was the insistence on cost-of-production explanations of relative prices and the slighting or dismissal of explanations based on utility and scarcity. Rothbard attributes this error to two factors. One was the Calvinistic reverence for work and distaste for consumption of the Scotch Presbyterian culture that directly influenced Adam Smith and infected Ricardo and later John Stuart Mill through James Mill. The elder Mill had been trained in Scotland to be a Presbyterian preacher, and he did not abandon his puritanical and crusading mindset when he become an atheist. The other factor accounting for the classical tradition’s emphasis on production costs and neglect of subjective valuations in explaining relative prices was its obsession with the long run.

The error of Smith, Ricardo, and the Mills is inexcusable, Rothbard maintains, because the correct approach lay ready at hand for all of them in many of the writings of the Scholastics and in a vigorous French tradition running through Cantillon, Turgot, Condillac, Say, and Bastiat. William Stanley Jevons’ exasperated comment comes to mind, in his preface to the second edition (1879) of The Theory of Political Economy: “The truth is with the French School, and the sooner we recognize the fact, the better it will be for all the world.” But Jevons asserted no more than an earnest desire to overthrow the assumptions and doctrines of the Ricardo-Mill economics. Rothbard lays irreverent hands on the sacred figure of Adam Smith himself.

In the course of making his case, Rothbard provides exceptionally full and informative presentations of the work done by Cantillon, Turgot, Say, and Bastiat, and offers persuasive evidence that James Mill had far more influence on Ricardo’s economics than has been generally recognized. In another departure from the pattern of the standard texts, he devotes more than 100 pages to the important controversies over money and the banking system that took place in Britain between roughly 1790 and 1850. He also provides a surprisingly full account of Marxism, from which it emerges after almost 150 pages as a tissue of fallacies with enormous destructive potential. In concluding his hostile appraisal of John Stuart Mill, “a woolly minded man of mush” (vol. 2, p. 277), Rothbard accurately characterizes his own approach to the discussion of ideas. After Mill, Rothbard writes, British economics falls into the hands of “academics and their constituencies [who] all too often confuse contradictory wavering with complexity, wisdom, and judiciousness of mind” (vol. 2, p. 294). There is no contradictory wavering in these two volumes.

Both volumes fully live up to their overall title: An Austrian Perspective on the History of Economic Thought. Rothbard scrutinizes almost every thinker he discusses for evidence of pre-Austrian insights or un-Austrian error. In Pythagoras of Samos, who wrote in the sixth century b.c., Rothbard finds “the embryo of the burgeoning and overweeningly arrogant mathematical economics and econometrics of the present day” (vol. 1, p. 9). Plato is faulted for employing the “murky concept” of the happiness of the polis, in defiance of the fact that “the city-state or community consists only of living, choosing individuals” (vol. 1, p. 11). Aristotle, on the other hand, is credited with “at least a hint of the later fully formed Austrian marginal utility theory of value” (vol. 1, p. 17), and with partially anticipating “the crucial Austrian point–made with particular force and elaboration by the twentieth-century Austrian economist Ludwig von Mises–that economic theory is but a part, a subset, of a broader, ‘praxeological’ analysis of human action” (vol. 1, p. 18). Such comments will certainly irritate non-Austrian readers of the book and can eventually tire even the sympathetic reader. But no one finishes a chapter wondering where the author stands.

Rothbard’s Austrianism is of the staunch type forged by von Mises. In this tradition, the true and correct approach to understanding economic phenomena is through theory, and definitely not through the accumulation of data of doubtful meaning and significance. The theory must be based on fundamental premises about individual human nature that are necessarily true (apodictically certain), and it should be expressed in ordinary language, not in mathematics, which leads the economist to distort reality by losing sight of human action. Employment of these premises yields the insight that all value is the product of subjective, individual evaluations that interact with resource availabilities to generate relative prices. Productive resources derive their value and hence their prices from the evaluations and prices of consumer goods, not the other way around as the British classical tradition stubbornly asserted for so long. This brand of Austrianism favors laissez-faire policies because its theory demonstrates the effectiveness of voluntary exchange in promoting human welfare and is hostile to the state, which is a coercive institution.

This perspective prompts Rothbard to give special attention in the first volume to thinkers who wanted to limit the authority of the state, to natural law theorists, and to theological speculation. He laments the decline of scholastic thought and Thomism, with its emphasis on reason and natural law, and the ascendancy of the Protestant emphasis on the essentially arbitrary nature of the divine will and of ethics.

The general title of the two volumes is accurate in another way: this is a history of economic thought, not a history of the science or discipline of economics. That becomes abundantly and even tiresomely clear in the first volume, as Rothbard takes us through endless references to obscure medieval writers who somewhere or other recorded their thoughts on prices, money, or interest (usury). Knowledge does not accumulate in their hands, as it does for the practitioners of any functioning science. Rothbard generally thinks highly of “the late Spanish Scholastics,” but their pronouncements on the important and vexing issue of usury, as he presents them, trace a back-and-forth, up-and-down course that fails to consolidate the insights gained along the way. Like the other medieval writers, they do not seem to have taken any real interest in economic analysis, a fact that ought not to surprise us, and consequently do not develop a science of economics.

Richard Cantillon’s brilliant insights raise a different but related problem. Cantillon took a keen interest in understanding the operation of what we have come to call economic systems and what he called “commerce in general.” But he exerted so little influence on the development of the discipline that he had to be rediscovered by Jevons 150 years after his death.

What should be said about Rothbard’s handling of the thinker he refers to sarcastically as “the celebrated Adam Smith”? Rothbard is not here pouring scorn on someone in the opposite camp. Smith is still today much revered by many who would be Rothbard’s allies in the realms both of economic theory and economic policy. Moreover, Rothbard assembles the evidence against Smith with great care, making judicious use of scholars such as Edwin Cannan, Joseph Schumpeter, Alexander Gray, T. W. Hutchison, and Salim Rashid, the last of whom has published a number of recent studies aimed at deflating Smith’s reputation.

If we evaluate Smith by his contributions in The Wealth of Nations to the formal theory of relative prices, both of final goods and so-called factors of production, a strong case can be made that Smith was a disaster for the discipline of economics. That is the criterion Rothbard mainly employs. But was this Smith’s principal contribution to the evolution of the science that came to be known as political economy in the nineteenth century and as economics in the twentieth? Or was it his recognition that extension of the division of labor had given rise to a new kind of society, which he called “a commercial society,” in which everyone became a kind of merchant and lived by exchanging?

Perhaps Smith, even as a price theorist, was not so abject a failure as Rothbard claims. A correct explanation of how prices, costs, and incomes are related to one another requires the simultaneous appropriation of three insights: (1) that all prices result from subjective evaluations (the utility insight); (2) that the relevant valuations are marginal valuations (the marginal insight); and (3) that everything depends on everything else (the general equilibrium insight). Grasping all three and holding them together was a task beyond Smith’s understanding and, I would argue contrary to Rothbard, beyond the understanding of any other writer prior to the end of the nineteenth century. Many thinkers before and after Smith recognized the importance of utility and scarcity in any adequate explanation of relative prices. However, there is a great difference between recognizing their importance and weaving them into a coherent and comprehensive theory of relative prices.

Rothbard’s two-volume history of economic thought will inspire much fruitful discussion of such questions. (The Review of Austrian Economics is already contemplating a symposium on Rothbard’s critique of Smith.) We must deeply regret that Rothbard’s untimely death prevented him from completing the promised third volume of his history. Works that combine so much scholarship, clarity, freshness, and courage have become rare in economics.