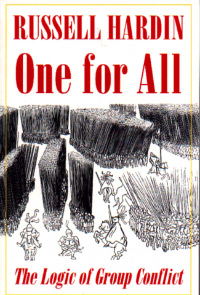 One for All
The Logic of Group Conflict
Russell Hardin
Kindle Hardcover Paperback
This book review appeared in the Winter 1996/97 issue of The Independent Review.

A wave of brutal wars has followed the fall of communist regimes in Eastern Europe and the Soviet Union. Unfortunately, such barbaric events are hardly unusual—the Holocaust is the most horrible example from recent history. In such events, large numbers of individuals act on behalf of groups. Russell Hardin’s recent book, One for All, “is an effort to understand the motivations of those who act on behalf of groups and to understand how they come to identify with the groups for which they act” (p. 4).

The book is not a historical work intended to describe specific ethnic conflicts, although it presents many details; rather, it is primarily an attempt to explain those conflicts. For this purpose, Hardin applies the Theory of Rational Action, a theory with a long tradition in the social sciences. Not-withstanding the book’s explicit theoretical perspective, it is accessible to a general reader with some social science knowledge, and it is enjoyable to read—something one can say of only a few social science books.

Hardin’s starting point is the observation that acts of nationalism or group conflict are types of collective action. The problem is to explain how these extreme types of collective action come about. A large body of literature, based on the Theory of Rational Action, deals with the general conditions under which members of a group act collectively to attain common goals or, put differently, to provide collective goods (e.g., peace or a clean environment). According to Mancur Olson’s seminal work (The Logic of Collective Action: Public Goods and the Theory of Groups. Cambridge, Mass.: Harvard University Press, 1965), members of large groups usually do not act to attain their common goals, the major reason being that in a large group an individual actor has only a negligible influence on creating the collective good, but has to bear a cost if he or she contributes. Furthermore, if a common goal (collective good) is provided, every group member can enjoy it even if he or she has not contributed to producing it. Hence, the incentive to “free ride”—to wait until others have provided the good, and then consume it. Collective action in large groups requires “selective incentives,” costs or benefits that depend on whether people contribute. Because acts of nationalism are a specific type of collective action, the question becomes: How can this type of collective action arise? Answering this question is the task of Hardin’s book (p. 5).

One important implication of this approach to explaining ethnic conflict is that nationalist behavior, such as ethnic cleansing, is not viewed as primordial or irrational. Such behavior is presumed to be in the individual’s interest. This basic hypothesis opens the way for a detailed consideration of the individual’s motivations, his interactions with others, and the structural conditions that promote or hinder the realization of individual interests. In particular, Hardin seeks to identify the selective incentives that lead individuals to engage in acts of nationalism.

Hardin argues that identification with a group arises from individual interest. This is not to say that an individual simply chooses to identify with a group. Instead, often various choices are made that finally lead to identification (p. 48). In developing this argument, Hardin notes that very often participation in group conflicts benefits the individuals who participate. The benefits may be material, such as getting a better job if the group succeeds, or more subtle, such as participating in the pleasures of group life (pp. 53–54). But Hardin also notes that “a nationalist or ethnic commitment might...involve only ideal-regarding and other-regarding motivations” (p. 49).

Certain norms holding specifically for members of a group are another condition for ethnic conflicts. Hardin distinguishes norms of difference and exclusion from universalistic norms. The former “redound to the benefit of members of a more or less well-defined subgroup within a larger society,” whereas the latter “apply universalistically to more or less all members of a society” (p. 72). An example of the former is the norm of honor in the duel among aristocrats, which Hardin analyzes at length. In contrast, the norm of truth-telling is universalistic. Hardin argues that norms of difference and exclusion “typically reinforce individual identification with the group and enhance the separation of the group from the larger society” (p. 72). At the same time, group identification fosters the emergence of norms of difference. Hardin analyzes in detail the processes that lead through feedback effects to the maintenance of such norms. He makes the important point that norms of difference, in contrast to universalistic norms, are often self-enforcing.

Group identification and existing norms of difference, by themselves, do not lead to group violence. Other conditions are necessary. If group identification is sufficient, a major condition for joint action is mobilization. That is, if there is individual willingness to act for a group and some mechanism of coordination for violent action, then group identification and existing norms of difference lead to violent conflicts. In chapter 6, Hardin closely analyzes the mechanisms that may lead to violent group action and provides detailed examples in support of the argument.

Hardin also considers moral questions. His analysis suggests that successful group mobilization has brought about “some of the worst disasters in the history of humanity” (p. 182). Communitarians generally neglect this historical fact. Hardin provides a detailed discussion of the currently very popular communitarian school of thought.

Although the book focuses on violent group conflict, it also deals with broader issues of the gains and losses of community, the consequences of group identification, and the formation of norms of difference and universalistic norms.

As indicated earlier, the book is enjoyable to read. It is rich in the sense that it utilizes the work of classical writers such as Adam Smith and David Hume, presents many examples from everyday life, and provides many insights in passing. It is not a rigorous theoretical exercise with systematic empirical applications. One drawback of such books is that the reader has difficulty in precisely reconstructing the theoretical propositions. It took me a long time to arrive at the preceding presentation of Hardin’s theory, and I am not sure whether Hardin would accept it.

I doubt that Hardin really explains identification in the sense of an emotional commitment, as opposed to mere group membership. For example, many citizens of former communist states entered the communist party or contributed to what was defined as the group interest. But apparently only a few really were committed to the goals of the group. The question therefore remains: Under what conditions do individuals not only act for a group but actually identify with it? There is an extensive literature in social psychology, such as the works of Izek Ajzen and Martin Fishbein, on attitude formation. Because identification with a group is a certain kind of attitude, the social psychologists’ work could help in explaining how group identification arises.

Another problem is the explanatory import of functionalist arguments. Many social theorists, including proponents of the Theory of Rational Action, analyze the gains and losses of certain behaviors or institutions for the group or for subgroups of actors. For example, Hardin discusses the extent to which violent conflicts benefit or harm the parties involved. Such analyses are interesting, but what do they really explain? Hardin is aware of this problem but does not pay enough attention to it. For example, he analyzes at length how a certain norm establishes “identity,” but only briefly discusses how this norm emerges (pp. 86–88). It seems that Hardin even thinks the latter question is not important (pp. 88, 156). But because the Theory of Rational Action focuses on individual actors, its exponents should be particularly concerned with the latter issue. Hardin often mentions tipping phenomena—the effects of the actions of a certain number of individuals on the actions of other individuals. Although these phenomena are now well known, little work has been done in modeling related evolutionary processes. Such work would be particularly interesting in application to violent ethnic conflicts. (Editor’s note: Tipping phenomena play an important part in Timur Kuran’s analysis, reviewed herein by Loren Lomasky.)

Hardin notes that norms of difference take many forms. For example, there are many different norms of dress or norms of linguistic usage such as slang (see particularly chap. 4). But why are certain rules about dress preferred to others? Although Hardin provides intriguing examples of the great variety of norms of difference, he does not provide any general propositions to answer this question. Leaving the question largely open may be an unintended consequence of making functionalist arguments: If I am mainly interested in the “functions” of group norms, I am less interested in the specific form of norms than in their functions, such as the reinforcement of group identification.

Karl-Dieter Opp
Russell Sage Foundation and University of Leipzig
EconomyNationalismPhilosophy and ReligionPublic ChoiceSocialism, Communism, and Collectivism
Subscribe Buy This Issue Get the App