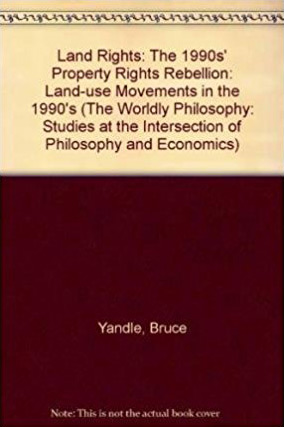 The first chapter, “The Property Rights Movement: How It Began and Where It Is Headed,” is by Nancie G. Marzulla. She begins by describing the origins of the modern property-rights movement. Marzulla sees a turning point in 1964, when the Department of the Interior announced a moratorium on claiming desert land for farming. In response the Sagebrush Rebellion was born, and by 1978 the department had repealed some of its regulations. But the extension of government controls continued, especially through enactment of key environmental laws, including the National Environmental Policy Act, the Clean Air Acts, the Clean Water Act, the Resource Conservation and Recovery Act, the Comprehensive Environmental Response, Compensation, and Liability Act (“Superfund”), the Surface Mining Control and Reclamation Act, and the Endangered Species Act. Further, state and local governments exacerbated the effects of these regulations of private property through enactment of additional public health and safety laws, zoning requirements, and licensing restrictions.

Marzulla describes the mobilization of property-rights advocates during the Reagan Administration and their success through 1988. She notes that Reagan’s appointees to the Environmental Protection Agency, Bureau of Land Management, and the Interior Department were very property-rights oriented and his Supreme Court appointee, Antonin Scalia, was a strong advocate of property rights. Further, Reagan issued Executive Order 12630, which required a “Takings Impact Analysis” of most government regulations to prevent unnecessary takings and to compensate property owners. These successes, however, ended with the Bush and Clinton administrations. Both appealed to the environmental lobby and ignored the property-rights movement. Marzulla, however, takes heart in the recent rise of grassroots property-rights concerns as political issues. She notes that property-rights activists have introduced bills in forty-four states to compensate property owners for losses due to environmental regulation.

Chapter 2, “Property Rights and the Police Powers of the State: Regula-tory Takings: An Oxymoron?” is by Erin O’Hara, who examines the takings clause of the Constitution and the safeguards it provides for property rights. These include the requirements that private property be taken only for public use and that government provide “just compensation” for its takings. O’Hara argues that the problem arises when government doesn’t physically take land, but regulates how it may be used. In these circumstances, obtaining compensation is difficult. She then considers regulatory takings to prevent nuisances, where compensation may not be required. But the nuisance doctrine has been interpreted to cover a broad range of regulations, as O’Hara shows by examining a variety of court cases. She analyzes the recent case Lucas v. South Carolina Coastal Commission (1992) to see whether it was truly a victory for the property-rights movement. Lucas was not allowed to build on land 300 feet from the coast, suffering a reduction of the value of his real estate. Although the court found in favor of Lucas, the decision contains some important loopholes. For example, the court failed to describe criteria for characterizing the property interest that will be evaluated for loss of value. O’Hara notes that even when the relevant property interest is well defined, it is often difficult to determine whether the challenged regulation precludes all economically beneficial or productive uses of the property. Finally, she points out that even if a regulation deprives land of all its economically beneficial uses, its owner need not be compensated if a court finds the proscribed use was not part of the original title. O’Hara goes on to examine other examples of regulatory takings and the conditions in which they are likely to be upheld.

In Chapter 3, “The Lucas Case and the Conflict Over Property Rights,” James R. Rinehart and Jeffrey J. Pompe also examine the Lucas case, providing useful details on the background and implications of the decision.

Chapter 4, “Land Rights Conflicts in the Regulation of Wetlands,” by Karol J. Ceplo, explores the political economy of wetlands protection, beginning with the 1972 Clean Water Act. A key provision of the law was Section 404, the wetlands clause, which stated that “any person wishing to discharge fill or dredging materials into the waters of the U.S. must first obtain a permit [from]...the Army Corps of Engineers.” Although, the Corps was at first a rather lax enforcer of Section 404, more recently the Corps and the EPA have taken more aggressive stands. A major argument of the chapter is that the Claims Court, which has jurisdiction over the Clean Water Act, “is mindful of the takings doctrines of the Supreme Court.” Hence, when the Supreme Court rules in favor of property rights and compensation, so does the Claims Court. Ceplo argues that the wetlands are being regulated inefficiently and inequitably.

Chapter 5, “Property Rights Conflicts under the Endangered Species Act: Protection of the Red-Cockaded Woodpecker,” by Lee Ann Welch, deals with another regulatory infringement of private property rights. Using the red-cockaded woodpecker as an example, Welch recounts the dilemma of Ben Cone, a landowner on whose property a colony of twenty-nine endangered woodpeckers lived. He was unable to sell timber from his land and was required to maintain the birds’ habitat at his expense. Welch demonstrates that the Endangered Species Act creates perverse incentives in two ways: first, the Fish and Wildlife Service has no incentive to recover and delist species, because it receives funding only when a species is listed as endangered; and second, private landowners have an incentive to quietly destroy an endangered species they find before it is discovered by Fish and Wildlife or to intentionally make the land uninhabitable to the species.

Chapter 6, “The Property Rights Movement and State Legislation,” by Hertha L. Lund, examines federalism and the role of state governments in reasserting protection for private rights.

Chapter 7, “The Political Economy of State Taking Legislation,” by Jody Lipford and Donald J. Boudreaux, also examines state issues in conflicts between environmental regulation and private-property rights to land. The authors apply a public-choice model to predict which states are likely to introduce land-rights legislation. The empirical estimates suggest that a “pro-development attitude among voters, low-cost access to state legislators, high rates of population growth, and the presence of coastal and publicly owned lands” have increased the probability of the state legislature’s considering property-rights legislation.

In Chapter 8, “Elements of Property Rights: The Common Law Alternative,” Roger Meiners describes cases that detail how the common law historically protected land rights. Meiners laments that we cannot know how common-law liability rules for pollution would have developed in the past few decades, because their evolution was largely precluded by statutes and regulatory controls. He suggests that the common law would have led to a strict liability rule for polluters. Meiners concludes that it is not clear that pollution statutes have provided a better solution to environmental problems than the common law might have, had it been allowed to do so.

The final chapter, “Federal Zoning: The New Era in Environmental Policy,” is by Robert Nelson. He recommends reforms of environmental regulation and proposes that three key questions be asked of environmental policies: first, should this area be regulated by government at any level? second, to the degree that government regulation is appropriate, what level of government—federal, state, or local—should be ultimately responsible? and third, if a federal role is desirable, where should this responsibility be placed and how should it be administered? Nelson’s suggested reforms include cost/benefit analyses, compensation for takings, avoidance of uniform regulation across the United States, and greater efforts to improve scientific understanding and information dissemination. This chapter is a fitting end to a balanced volume on critical issues affecting the sanctity of private property rights in the United States.

Gary D. Libecap
University of Arizona
American HistoryEconomyLand UseLaw and LibertyProperty Rights, Land Use, and ZoningRegulation
Subscribe Buy This Issue Get the App