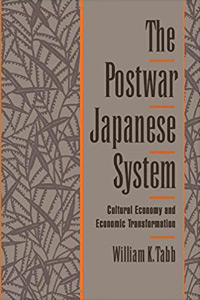 The recognized limitations of neoclassical economics and the desirability of integrating social and cultural factors into economic analysis have spurred much recent research. Such research holds particular promise for the study of economic history and development, where institutional changes may have brought about many of the events at issue.

William Tabb’s book on the Japanese economic system in the postwar era represents just such research, bringing cultural variables into the explanation of various economic institutions. Thus, he views unique features of the Japanese economy such as the cooperative relations of employers and employees, the industrial policies, and the complex financial-industrial organization known as keiretsu as manifestations of a Japanese cultural economy “in which choices are constrained, behavior is rooted, and institutions are grounded” (p. 295).

Tabb would have us look to this cultural economy in explaining the past, present, and probable future of the Japanese economy. Taking this approach, he analyzes the historical roots and development of the Japanese economy and its unique institutions (chaps. 3 and 4); Japanese manufacturing systems and labor relations, with special reference to the automobile industry (chaps. 5 and 6); the politics of urban and regional policy making and the problems those policies create (chap. 7); Japanese financial institutions and the collapse of the “bubble economy” (chap. 8); and issues related to industrial policy and trade conflicts between Japan and the United States (chap. 9). Tabb explores such topics as how Japanese institutions might change in a new global economy, what roles Japan might play in the economic development of other Asian countries, and the lessons of Japanese experience for the United States.

Consideration of the cultural dimension helps Tabb describe the price Japanese society has paid for rapid economic development. For example, the Japanese manufacturing system receives praise for its efficiency, but it creates great stress for the labor force by the intensity of work and the heavy responsibilities placed on workers (pp. 151–52). Although I cannot agree that the Japanese system of labor relations rests on “the exploitation of labor” (p. 157), no one can deny that the Japanese social and cultural setting has much to do with the establishment and development of Japanese manufacturing and its labor relations, and we need to consider the negative social consequences of the system as well as its economic benefits. Tabb’s descriptions and his reports of interviews allow the reader to learn about the negative features of the Japanese system and to judge what parts of it might be adopted by another country, such as the United States, with a different cultural and social background and environment.

Although Tabb’s descriptions of the Japanese system have value, a serious methodological problem tends to undermine his efforts. He states that “my task here is not the reconstruction of economic theory” (p. 289), but he needs some framework within which to link cultural with economic variables. He rejects the transactions-cost analysis of institutions because he thinks it “miss[es] the dynamic nature of strategic choice” (p. 296), and he takes a dim view of neoclassical economics in general because it “tells us little about the real world differences between the traditional American firms’ relations as compared with the Japanese” (p. 297). One might surmise that his analysis rests on an underlying Marxian framework, but he provides no explicit specification.

How Japanese economic institutions may change is currently a very controversial topic. It is hard to deny that unique economic institutions and policies such as the keiretsu, industrial policy, and cooperative employer-employee relations contributed to Japanese economic development during the era of catching up with the West. At present, however, the Japanese economy seems to be undergoing a great transformation: lifetime employment and the seniority system are no longer general rules; keiretsu are dissolving themselves, especially in the automobile and electronics industries, as production facilities are shifted abroad; and the main banking system is changing because of deregulation and the internationalization of financial markets. Some scholars argue that traditional institutions and policies based on governmental guidance will not work now that Japan has reached the frontiers of world technology, and they claim the economy needs drastic changes to prosper in the twenty-first century. (For an example of such an argument, see Iwao Nakatani, Nihon Keizai no Rekishiteki Tenkan [A Historical Transition of Japanese Economy]. Tokyo: Toyo Keizai Shinposha, 1996.)

Tabb does point to some recent changes: the keiretsu structure is being challenged by younger managers and the increasing bargaining power of more efficient suppliers; industrial policy is more difficult to implement because of foreign pressure, more open financial markets, and the independent resources of strong Japanese transnational firms; and increasing numbers of shinjinrui, the new breed of young people, reject their parents’ traditional values. But Tabb fails to predict how Japanese institutions will be altered by these changes. A book on current Japanese economic institutions should have clearer implications for the future course of institutional change and its impact on the economy.

Tabb presents a more concrete picture of Japan’s economic role in Asia. He states that the “new booming Asian economies depend on Japanese capital, technology, and strategic guidance” (p. 263). Japan maps its Asian strategy by carefully examining the economic conditions and political stability of each country and so can “plan markets” abroad the same way that it uses industrial policy to manage domestic conditions. This strategy increases “the dependence of each nation on a monopsonistic buyer—Japan” (p. 264), and therefore “Asia comes under Japanese guidance” (p. 265).

Tabb overestimates the strength of the Japanese system and its ability to manage events in Asia. Although his depiction had some veracity earlier, the pattern of Asian economic growth has changed dramatically in recent years, and it has become anachronistic to talk about the region’s economic growth in terms of dependency. (See Toshio Watanabe, “Jiritsu Hatten Hajimeta Higashi Azia” [East Asia That Has Started Self-Sustained Devel-opment], Nihon Keizai Shinbun, 17 June 1996.) Japanese companies’ investment in the Newly Industrializing Economies (NIEs = South Korea, Taiwan, Hong Kong, and Singapore) peaked in 1989; in countries of the Association of South-East Asian Nations (ASEAN = Indonesia, Malaysia, Philippines, Singapore, Thailand, Brunei, and Vietnam) it peaked in 1990. NIEs have replaced Japan and the United States as the major suppliers of investment money to ASEAN countries: from 1991 to 1994, NIEs invested $27.2 billion in ASEAN countries, while Japan and the United States together invested $24.1 billion. Moreover, exports from East Asian countries (NIEs, ASEAN, and China) to Japan and the United States fell from 47.8 percent of their total exports in 1985 to 36.6 percent in 1994. Clearly, flows of goods and money are changing within East Asia; no longer can one accurately describe East Asia’s economic growth as dependent on the Japanese (or the American) economy. Some Japanese are even beginning to fear that Japan may be left out of future economic growth in East Asia! Tabb goes astray in predicting the roles of the Japanese economy in Asia, mainly by failing to grasp the multifaceted dynamism of East Asian economic growth. The emergence of free-trade-oriented economies in East Asia has diminished the advantage of Japanese economic institutions, and Japan is becoming just one of Asia’s big economies.

From Tabb’s book, one learns that although integrating social and cultural factors into the analysis of economic development is desirable, proposing it is one thing and doing it another. As more East Asian countries achieve rapid economic growth, we surely need to know more about the social and cultural factors that underlie their development. Making real headway remains a major challenge to students of the political economy of economic development.