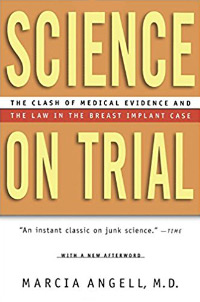 Science on Trial
The Clash of Medical Evidence and the Law in the Breast Implant Case
Marcia Angell, M.D
Hardcover Paperback
This book review appeared in the Summer 1997 issue of The Independent Review.

In this concise, insightful, and inadvertently amusing book, Marcia Angell chronicles the background and history of the silicone breast implant debacle. In lucid language that both lay readers and scholars can appreciate, Angell shows that there is no scientific evidence that silicone breast implants are really dangerous, but the U.S. Food and Drug Administration (FDA) banned them anyway in 1992 in response to political and cultural pressures. The ban then triggered the largest tidal wave of tort litigation in history and instilled unwarranted fears and anxiety in approximately 2 million women who have implants. Angell provides a thoughtful analysis of the clash between the scientific evidence, the law, and public perceptions of the alleged dangers of silicone breast implants. She extends her discussion to the broader related issues of the need for tort reform in the United States and the increasingly popular antiscience sentiments that pervade the media and public thinking. She argues that without significant reforms and a return to science, society is likely to suffer serious health consequences that extend beyond the issue of breast implants.

The book is neatly organized into two introductory chapters, which provide an overview of the breast implant story, and six additional chapters dedicated to discussing the six broad themes Angell perceives as important in shaping society and the resultant implant ban in the United States. The themes are regulation, tort law, the ambiguous role of scientific evidence in society, science in the courtroom, the effect of profit motive on public life, and the way in which the media present medical issues to the public. The book is well written overall, although as a possible tool for scholars it suffers from an annoying tendency to use quotations without specific citations. Instead, Angell often cites an entire book as a reference for a specific quote.

First, discussing regulation, Angell reviews the role the FDA and its head, David Kessler, played in deciding to ban the implants. Angell asserts that Kessler came to the FDA with a combative style and a clear goal to strengthen the agency. A few highly publicized court cases in which plaintiffs allegedly injured by breast implants received large awards, as well as vocal input from Sidney Wolfe of Public Citizen (a Naderite consumer advocacy organization), led the FDA to respond “like a political body, not a regulatory body” (p. 25). Further, although the implants had been on the market for twenty years, implant manufacturers had not produced safety records on them. A battle of wills ensued between Kessler and the manufacturers.

Angell repeatedly emphasizes the absence of scientific evidence that silicone implants were dangerous at the time the ban was imposed. She notes the preponderance of anecdotes, sensationalistic case reports, and pseudoscientific testimony at biased FDA advisory panel hearings, where panelists included men who testified as plaintiffs’ expert witnesses in implant cases.

Second, Angell discusses the role of tort law on American life in general and its impact on the rush to court with implant cases after the FDA ban. At the end of 1991, some 200 cases had been filed against Dow Corning, the major implant manufacturer. By the end of 1992, the year of the ban and the publicity that followed it, 10,000 cases had been filed, and by June 1995, about 248,000 women claimed to have illnesses related to implants. These illnesses include nebulous rheumatologic and immunologic disorders, fatigue, weakness, depression, and other symptoms that may be minimal or have multiple causes. No credible epidemiologic studies have shown a higher risk of these diseases in women with implants than in those without.

Angell provides the reader who may not be familiar with American tort law a general overview of contingency-fee plaintiffs’ attorneys; a brief history of mass personal injury litigation in the United States; the extension of personal injury litigation to class actions; and a summary of the course of the breast implant class action suit. Angell notes that the subsequent extension of such suits to other silicone-containing medical devices poses a threat to all devices, whether containing silicone or not. For example, plaintiffs have made claims against the manufacturers of raw materials used in making silicone devices (p. 84). As a result, a large number of important products may become unavailable or prohibitively expensive. Angell concludes her criticism of current American tort law by asserting that it does not serve its stated goals of compensating the victim and deterring businesses from marketing dangerous products. Her analysis of this complicated topic, though abbreviated and somewhat simplified, nevertheless highlights important problems.

Next, in chapter 5, Angell turns her attention to the nature of scientific evidence. This chapter should be recommended reading for schoolchildren learning science and for laypersons without scientific backgrounds but who are interested in gaining a better understanding of what is and is not science. Angell believes that most nonscientists can understand much more than they think they can about medical research, and her chapter nicely exemplifies how to explain basic scientific principles to the nonscientist willing to learn. She then contrasts the scientific approach to what happened in the handling of breast implant issues.

In chapter 6, Angell launches a carefully worded attack on the fate of science in the courtroom in general and the implant cases in particular. Her dry, factual recitation of the so-called credentials of three key plaintiff implant witnesses typifies her simple, clear, and convincing writing style, as she lets the facts speak for themselves and lead the reader to compelling conclusions (pp. 122-25). Her analysis of the traditional common-law Frye standard for admitting expert witness testimony and her explanation of the Daubert U.S. Supreme Court case and the federal standard are also very good lay overviews of existing evidence standards and related issues. Fortunately, these sections overshadow minor flaws in this chapter, such as Angell’s mixing together of negligence, strict liability, and fraud elements in her attempt to explain what is theoretically required for a plaintiff to prove her case in court (p. 112). Surprisingly, she makes no reference in this section to work by Peter W. Huber, who has written extensively on expert testimony (see, e.g., Galileo’s Revenge. New York: Basic Books, 1991).

Angell’s final two themes pertain to profit motives and the media, respectively, in chapters 7 and 8. She notes that the unprincipled and unethical behavior of avaricious lawyers, doctors, expert witnesses, and the media helped disseminate and perpetuate the myth that implants are dangerous, despite scientific evidence to the contrary. She portrays the media’s actions as part of a broader trend toward scaring a gullible and cynical public into believing it is drowning in a sea of toxins, a trend that has great entertainment value, especially if conspiracies are postulated (p. 158). She concludes that “people feel whipsawed by science, when they are really being whipsawed by the media” (p. 174).

The most amusing chapter comes at the end of the book, where Angell discusses the public’s troubling trend away from science, reason, and logic and the growing fondness for “other ways of thinking” (chapter 9, pp. 178-91). She asserts that this popular trend away from science made the implant debacle possible and describes a variety of antiscience coalitions, each with different reasons for their antiscience views. These include humanists, who believe science has been oversold and has led to the emergence of a callous, technology-enthralled society; multiculturalists, who believe science glorifies the white male and bolsters the power of the governing classes; feminists who believe science is inherently “androcentric”; environmentalists; and proponents of alternative medicine and mysticism, who reject the principles of scientific evidence. Angell notes that “many Americans not only do not understand science, but they don’t want to understand it and they don’t think it’s necessary that they do” (p. 188).

Angell is an especially credible author for a book that is highly critical of the handling of the implant scandal. As a physician, an executive editor of the prestigious New England Journal of Medicine, and a self-described feminist and liberal Democrat, Angell can hardly be dismissed as a reactionary element of the frequently caricatured white-male-dominated lunatic extreme right-wing or libertarian fringe. Her basic attitude is best illustrated by her discussion of the proper role for the FDA. Angell notes that Kessler had been a target of newly elected Republicans in Congress. She states that

some of the new breed take the libertarian position that people should be free to choose their own drugs and devices; those that work will stay on the market, those that don’t won’t (perhaps by killing off their customers). According to this swashbuckling view, the FDA deprives people of choice and interferes with the wonders of a free market. There can’t be many knowledgeable people who subscribe to such silliness, but still, there is a real issue here. (p. 64, my emphasis)

Angell’s characterizations of libertarians and their views demonstrate that she is no advocate of drug and device deregulation. Nor is she an industry cheerleader. This preexisting perspective strengthens the force of her harsh criticisms of the FDA, the courts, and the media in their handling of the breast implant issues. As a liberal Democrat, she seems initially to have approached the topic expecting to find evidence of serious problems with the implants, but as a scientist she retained her objectivity and sought to evaluate existing evidence. With an Alice-in-Wonderland na?vet?, she discovered that there was and is no credible evidence that implants are dangerous; moreover, the institutions she expected to be responsibly safeguarding the public’s health were instead engaged in political grandstanding, unprincipled profiteering, and the perpetuation of ignorance. Angell concludes by proposing reforms she believes would help prevent such incidents from recurring (pp. 202-9). Here, she clearly reveals her fundamental pro-regulation views and faith in the possibility of government beneficence. She favors forbidding contingency fees and eliminating jury trials in civil tort cases, but does not consider the constitutionality of eliminating civil jury trials or the additional problems further regulation of contractual attorneys’ fees could create. Nor does she cite any studies to support her contention that judges would make better decisions than juries. She favors a requirement that judges appoint expert witnesses from a supposedly neutral pool of government-approved scientific experts, but offers no analysis of the potential problems of such a system.

Angell expresses disdain for the media’s irresponsible handling of the debacle and the greed of lawyers and doctors who became rich off the continued crisis. Although she stops short of calling for media censorship, she implies that greater state regulation of doctors and lawyers would curb such avarice. She decries the public’s unwillingness to make minimal efforts to evaluate scientific stories, but she offers no other suggestions on how to inspire the public’s interest under the present system.

Angell concludes by reemphasizing that “only by relying on scientific evidence can we hope to curb the greed, fear, and self-indulgence that too often govern such disputes. That is the lesson of the breast implant story” (p. 209). An analysis of how to successfully achieve such a reliance may need to be the subject of a different book by a different author, but for now Science on Trial is worthwhile reading for anyone interested in tort law, FDA regulation, and the antiscience movement.