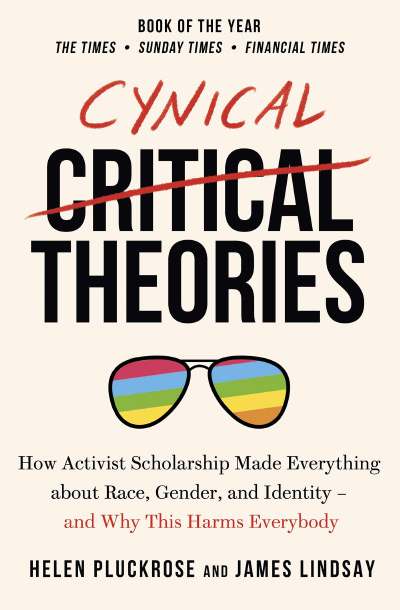 Cynical Theories
How Activist Scholarship Made Everything about Race, Gender, and Identity—and Why This Harms Everybody
By Helen Pluckrose and James Lindsay
Kindle Hardcover Paperback Audiobook 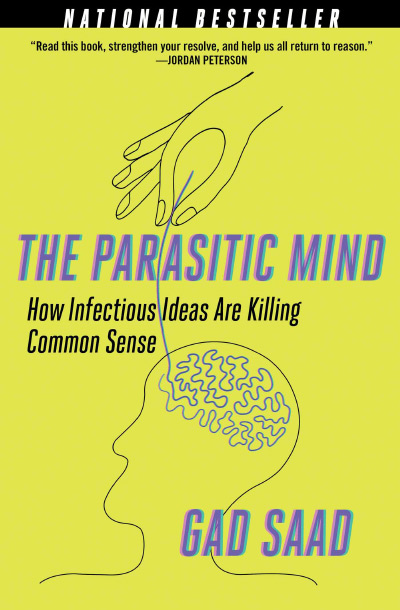 The Parasitic Mind
How Infectious Ideas Are Killing Common Sense
By Gad Saad
Kindle Hardcover Paperback Audiobook Audio CD
Reviewed By Robert M. Whaples
This book review is a web exclusive for the Spring 2022 issue of The Independent Review.

Both Cynical Theories and The Parasitic Mind argue that bad ideas about who we are—individually and collectively—have gone viral and threaten to tear apart the fabric of society, wrecking individual lives in the process. Both books have been widely read (the first has over thirty-six hundred Amazon ratings, the second has over three thousand), but they have little in common in terms of style and approach—except for a commitment to the use of reason, free inquiry, and free speech.

Pluckrose (an “exile from the humanities” and editor of Areo Magazine) and Lindsay (mathematician and founder of New Discourses LLC) are academic and scholarly in tone. Saad is an evolutionary psychologist and professor of marketing at Concordia University in Montreal. When someone disagrees with his ideas, he “lets loose” on the “buffoon” (p. 33). Saad runs in the libertarian direction. Pluckrose and Lindsay are political liberals in the pre-woke sense.

Pluckrose and Lindsay essentially offer a layman’s guide to the mindset, customs, myths, idioms and etiquette of a new religion, Social Justice. As they tell it, the religion has its roots in postmodernism, which has the mistaken ideas that oppression is everywhere and that it is the first movement in history to battle such oppression. Its other central tenet is that life has no meaning. The Social Justice idea that there is an unconscious, uncoordinated conspiracy of oppression driving the world is, of course, almost completely alien to economists who have noticed and documented the opposite—an unconscious, uncoordinated spontaneous order rooted in the market that benefits everyone. The authors argue that Social Justice didn’t invent ethical opposition to oppression, “we liberals did” (p. 39), although it seems that ethical opposition to oppression has a much more ancient pedigree. Social Justice insists that the collective experience trumps the individual and universal. We’re not to think of people as unique individuals bound together in a community that encompasses all of mankind (say, because we are all children of the same God). Rather, we are members of tribes (not the old-fashioned kind) made up of people from the same identity groups. These groups cannot really understand each other, but their collective identities are said to empower their members.

After explaining the evolution of these ideas and the leading figures behind them, Pluckrose and Lindsay examine five manifestations of these Social Justice ideas: 1) postcolonial theory (but did you ever notice that the only widespread voluntary decolonization in world history was the one carried out after World War II by the European powers, when they came to question the morality and legitimacy of their own system?), 2) queer theory, 3) critical race theory and intersectionality (“one could be easily forgiven—if critical race theory didn’t consider it racist to forgive this—for thinking that critical race theory sounds rather racist itself, in ascribing profound failures of morals and character to white people (as consequences of being white in a white-dominant society)” [p. 121], 4) feminism and gender studies, and 5) disability and fat studies. In all five chapters, they make telling points that show how these movements distort reality, divide people, and ultimately harm everyone, including those they are putatively meant to help—although sometimes bringing fame and fortune to the ideas’ purveyors.

Their key point (sometimes too tepidly made) is that proponents of these theories have pushed them to unhealthy extremes. “If you train young people to read insult, hostility, and prejudice into every interaction, they may increasingly see the world as hostile to them and fail to thrive in it” (p. 132). The biggest unifier of these movements is that people don’t want to have responsibility for their own actions and their own failures—they want to blame others. But if you aren’t responsible for your own failures, then it eventually becomes clear that you aren’t responsible for your own successes. You don’t have any skin in your own game, you behave irresponsibly and pretend you can blame it on others, but this doesn’t really solve your own problems. Instead, Social Justice offers this dysfunctional take on Descartes’ self-discovery: “I experience oppression therefore I am” (p. 52). It’s hard to imagine a sadder line to fill in Descartes’ blank. “I experience oppression, therefore I am” subtracts almost all meaning from existence. How could one not prefer “I care, therefore I am”? Or “God cares, therefore I am”? Or “God thinks, therefore I am”?

Unfortunately, it’s hard to disagree with Pluckrose and Lindsay’s conclusion that Social Justice has become “the fundamentalist religion of the nominally secular left” (p. 211). Like Saad, they are hostile to religion, so calling Social Justice a fundamentalist religion is the ultimate put-down. The deeper point, which they miss, is that the old religion saw the ultimate benignity of a sometimes hostile universe, while the new one sees unrelenting hostility everywhere. Yet some passionately embrace this new creed.

Although he doesn’t lay things out as systematically, Saad argues that these same bad ideas are spreading like viruses: political correctness which claims the right to never be offended; postmodernism, which does not believe in objective truth; and various shades of identity politics, which aim to divide society into noble victims and disgusting bigots and which make a virtue of having emotions cloud one’s judgment.

What should we do when these ideas invade our lives? What should we do when the “cancel culture” claims another victim who said something innocuous or slightly off-key that provokes the fury of the self-anointed thought police and ruins someone’s career or life—something we now see on an almost daily basis? Pluckrose and Lindsay invite the reader to return to the earlier version of liberalism (not classical liberalism, but late twentieth century liberalism) founded on free speech and rationality. Saad answers these questions by advocating a fiery brand of libertarianism. His fundamental point is that the marginal benefits of free discussion are gigantic—especially because the marginal external benefits (benefits to third parties) are large—so we need to stick out our necks to protect free speech and make it painful for those who try to silence others. We should never self-censor but should turn the tables on the would-be censors.

Unfortunately, he pushes this argument too hard. There have always been and will always be clear marginal costs to speaking freely, so the rational person frequently self-censors by not saying everything he would like to say. Speaking up is a question of prudence. Wise people carefully choose when, where, and how to speak. Self-censorship goes by other names, including tact and humility, and virtually every human being who has ever lived has practiced it to some extent. Still, Saad is correct that there are ways to reduce the marginal cost of speaking one’s mind on important matters—perhaps most obviously by learning how to shrug off the opinions of people who don’t have your best interests in mind or whose ideas are not worthy of respect.

Regrettably, while Saad encourages people to mitigate the marginal costs of speaking unpopular ideas, he goes overboard in praising people who make the world worse by making it a less civil place. Consider the following: “the Organization of Islamic Cooperation. . .[has] repeatedly attempted to get Western nations to adopt the Cairo Declaration of Human Rights in Islam, which would oblige signatory nations to punish anyone who criticizes Islam. This repeated quest to impose Sharia-like restrictions on free speech regarding Islam is receiving a sympathetic hearing in the West including from. . .former president Barack Obama who famously stated in an address to the United Nations assembly that ‘the future must not belong to those who slander the prophet of Islam.’” There are many things to be said about Obama’s statement, but Saad’s response is “on the contrary Mr. President, the future must belong to those who criticize, mock, ridicule, and satirize all prophets, ideas, religions, and ideologies” (p. 51, emphasis added).

Frankly, I don’t want to live in a dystopian world where every idea—the good with the bad—is mocked, ridiculed, and satirized. That’s a world in which civilization is torn down. That’s nihilism. Unfortunately, however, we seem headed in that direction. Mocking for the sake of mockery, getting cheap laughs, or demeaning people with whom you share a common humanity warps your soul and the souls of others. Saad’s rebuttal is that satire is a “surgeon’s scalpel,” and he quotes philosopher Peter Sloterdijk saying that “truth is a matter than can stand mockery, that is freshened by any ironic gesture directed at it. Whatever cannot stand satire is false” (p. 51). Try telling that to your ex-wife, former friends, alienated children, and bewildered students. Satire, of course, has its place. But it is rather limited and usually works best when it is done light-heartedly. It’s not as though there’s a sub-optimal amount of satire and mockery in the modern world. How often do satire and mockery advance genuine debate and understanding?

The reader is advised to think carefully about some of Saad’s concluding advice, which includes admonitions to 1) believe in the power of your voice (check), 2) don’t be afraid to judge or give offense (only if you want to be a jerk will you go out of your way to offend), 3) do not virtue signal (says the man who then crows that “most people recognize the gargantuan courage that’s required to speak my mind in the manner that I do” (p. 181, perhaps “courage” should be “ego”?)), 4) be a penalty kicker (i.e. take risks), 5) activate your inner honey badger (many people, of course, don’t have an inner honey badger and most people actually trust and respect the calm, steady, sympathetic, even-handed voice much more than the reflexively “fearlessly ferocious” one), 6) say no to the thought police (check), and 7) stop lowering academic standards (check).

Saad is an accomplished satirist, displaying his abilities in a riff in which he pushes “trans” ideas to the limit. Using the concepts of TransAgeism and TransGravity, he announces that he will enter a Judo contest for children, since he self-identifies as a child and another for octogenarians, as his age self-identity changes on a daily basis, and also in a contest for smaller people since he self-identifies as weighing 120 pounds. His ultimate goal to silence his opponents with wit and satire can be effective, but a loftier goal would be to convert his adversaries, rather than dismissing them. Sympathy wins more converts than contempt. While warning of the dangers of the divisiveness of incessantly identifying with our “tribes,” it is better to remind ourselves that each of us is a unique creation and that our shared humanity unites us.