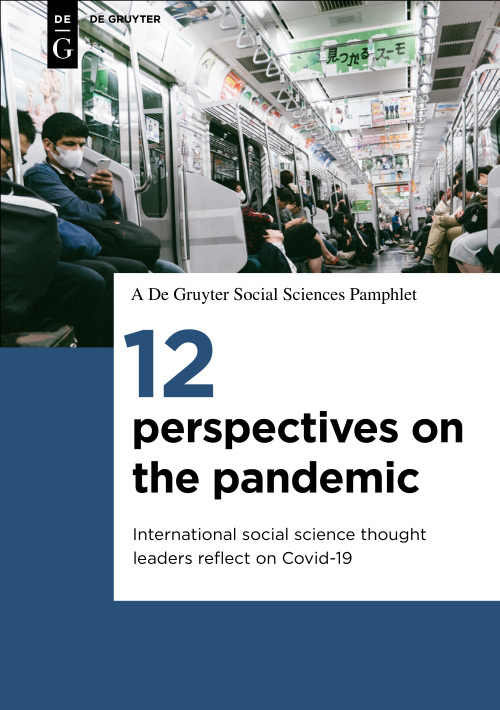 Twelve Perspectives on the Pandemic
International Social Science Thought Leaders Reflect on COVID-19
Edited by Gerhard Boomgaarden
Get eBook
This book review is a web exclusive for the Summer 2020 issue of The Independent Review.

While most people hope that the COVID pandemic will soon go away and are waiting for things to return to normal, many of the authors in this collection predict that the coronavirus will fundamentally alter our lives—acting as a “covert midwife for authoritarian regimes” (p. 11), permanently changing work arrangements, crippling tourism, and compelling us to step back from attending “sporting events and concerts, or [visiting] densely-packed places of worship, restaurants, cinemas, beaches, pubs and cafes, [that] have become central to many people’s sense of being a worthwhile human being” (p. 81).

However, some argue that the changes brought about by the virus may be a good thing.

The positive aspects of the virus are described most extensively by sociologist Monika Büscher, who identifies increases in walking and cycling, reductions in air pollution and carbon emissions, and “streets filled with bird-song” as the “silver lining” (p. 59) of COVID and sees the COVID crisis as a “precious opportunity to stop business as usual” (p. 61). In fact, she argues that COVID isn’t the cause of the crisis, it is a symptom. “Hypermobility, the marketisation of healthcare, decades of disinvestment in resilience, inequality and the growth of precarious work worldwide have all created perfect conditions for viral spread” (p. 59). Increased international travel (if this is what is meant by “hyper” mobility) has obviously played a role in the spread of the virus, but Büscher offers no evidence linking any of these other causes to COVID deaths. Indeed, some of the highest death rates in the world are in countries with very low levels of inequality. Excluding small countries like Andorra and San Marino, the nations with the highest COVID death rates per million as of May 13, 2020 are (in descending order) Belgium, Spain, Italy, the UK, France, Sweden, the Netherlands and Ireland. Interestingly, all of these countries have Gini coefficients below the world’s average—that is, their population’s income levels are more equal than average. Belgium’s Gini coefficient is the eleventh lowest in the world. One might expect that wealthier countries have the capacity for greater “resilience” to the virus, but in fact there is a distinct positive correlation between COVID deaths per million population and real GDP per capita. It would be worthwhile to explore the reasons for this positive correlation, which may include things like more elderly living in nursing homes and assisted living facilities.

Büscher continues by quoting Michael Polanyi’s warning that “to allow the market mechanism to be sole director of the fate of human beings and their natural environment would result in the demolition of society” (p. 59-60), without noting that the European countries that have these high COVID death rates have certainly not allowed market mechanisms to be the sole directors of life. Government’s share of GDP is higher in these high-COVID death countries than almost anywhere else in the world. According to the International Monetary Fund, excluding countries with populations below 100,000, France has the second highest percent of GDP made up of government expenditures and Belgium is fourth in the world. She also warms to the hope that the virus will permanently swell the ranks of those who work at home rather than in offices – reaching 25 to 30 percent of the work force by the end of 2021—without considering the sense of community and connection that is possible from face-to-face in-person inactions in the workplace, rather than screen-to-screen virtual meetings.

A recurring theme of Twelve Perspectives on the Pandemic is that the virus is having a disproportionately negative impact on marginalized populations. This may be true, but is not documented well by the authors. Ingrid Piller focuses on the problems faced by groups that don’t speak their country’s dominant language, such as Spanish speakers in the U.S., explaining that COVID mortality for Hispanics in New York City “far exceeds that of other groups” (p. 15). The NPR article she cites notes that “Latinos—who make up about 29% of the city's population—represent nearly 34% of the patients who have died of COVID-19,” so “far exceeds” may be somewhat of an exaggeration, but more importantly this statistic ignores national-level data, which do not support her argument. According to the Centers for Disease Control, Hispanics made up 16.6% of national COVID deaths as of May 13. However, Hispanics make up about 18.3% of the population. (Interestingly, the CDC source gives the Hispanic percent of New York City’s COVID deaths at 28.2%—almost exactly matching the population share—as the gap closed up in the month following the NPR article.) Such calculations need to adjust for other factors, such as the age distribution, which is something one would expect a social scientist to do but isn’t done in this volume.

Related to this same concern, Stephanie Nawyn discusses the impact of COVID on refugees across the globe, explaining that many “experts have labeled refugees as particularly vulnerable” (p. 45), as “it is difficult for refugees to use proper sanitation like frequent hand washing, and social distancing is nearly impossible” (p. 46). However, she doesn’t provide any statistics to show that COVID has had an inordinate impact on refugees. The United Nations High Commissioner for Refugees, lists the top five nations hosting refugees as Turkey, Pakistan, Uganda, Sudan and Germany. Interestingly, these countries are not reporting high levels of COVID deaths. Germany is an outlier with one of Western Europe’s lowest rates, while the reported deaths in Pakistan, Sudan and Uganda are currently (May 13) estimated to be 737, 80 and zero.

I concur with Deborah Lupton about the “need for urgent social research in a COVID-19 society” (p. 51), but most of these scholars don’t exactly point the way. For example, Gurminder Bhambra spends her pages arguing that the “global inequalities and injustices that structure our world are a consequence of European (and U.S.) colonial and imperial histories” (p. 22), rather than addressing COVID. Stephanie Walsh Matthews tells us that “if you are struggling with doing your part and staying home, you are struggling with an ancient inner opposition—the refusal to equate freedom with confinement. As such, in semiotic turns, you must restructure the notion of confinement as related to present physical spaces, and locate it in the context of humanity as a whole.” As we regress from 2020 back to 1984, she admonishes us to “Stay home. You are not confined ... you are but merely constrained” (p. 42). More helpfully, Anthony Elliott critically examines the idea that COVID has pushed the world past “peak globalization.” And Bent Greve provides a warning that COVID “might have a detrimental impact on the future of welfare states because of the need to pay interest and repay debt” (p. 27)—and may necessitate raising taxes because in the real world there are binding budget constraints, tradeoffs and scarcity.

We clearly need social scientists to examine COVID. However, they are likely to be most beneficial when they estimate the marginal effects of different COVID strategies and policies using the best statistical techniques. Although they are not represented in Twelve Perspectives on the Pandemic, economists are especially good at this and many have turned their attention from their ordinary concerns to COVID. This has begun to bear fruit, for example in Dhaval Dave, Andrew Friedson, Kyutaro Matsuzawa, and Joseph Sabia’s “When Do Shelter-in-Place Orders Fight COVID-19 Best? Policy Heterogeneity across States and Adoption Time” (NBER Working Paper 27091, May 2020). They find that states’ shelter-in-place orders increased the number of people staying at home, and reduced measured COVID case levels, but didn’t have a statistically significant impact on deaths – except, somewhat, in the earliest adopting states (most of which are colder and more densely-populated). This kind of research can provide us with the kind of information and advice we need in order to effectively deal with the pandemic.