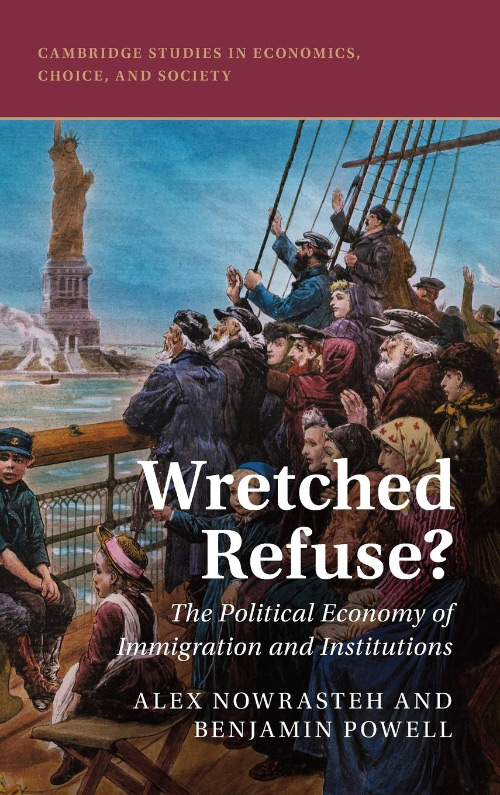 Wretched Refuse?
The Political Economy of Immigration and Institutions
By Alex Nowrasteh and Benjamin Powell
Kindle Hardcover Paperback
This book review is a web exclusive for the Summer 2021 issue of The Independent Review.

While trade in goods and services is largely free, making the gains from further liberalized trade relatively modest (see, for example, Paul R. Krugman, Maurice Obstfeld, and Marc J. Melitz, International Economics: Theory and Policy. Harlow, UK: Pearson Education Limited, 2018, p. 297), the governments of almost every nation on the globe enforce strict immigration restrictions. Because productive gains from allowing the free movement of labor (immigration) mimic the productive gains of allowing the free movement of goods and services, this means the world could be vastly wealthier if immigrants could legally move to more productive areas. This has prompted economist Michael Clemens to liken immigration restrictions to leaving trillion-dollar bills on the sidewalk (“Economics and Emigration: Trillion Dollar Bills on the Sidewalk?” Journal of Economic Perspectives 25[3]: 83-106). By allowing people to move from low productivity areas to high productivity areas, everyone can benefit from the increased output that ensues.

Part of the reason areas that attract immigrants, like the U.S. and Western Europe, are highly productive is because these areas have institutions, or rules governing interaction between individuals, that promote productive cooperation and competition. For example, respect for private property and a firm and nondiscriminatory rule of law encourage individuals to invest in greater productive capacity by investing in human capital (skills learned at school or on the job), physical capital (machines and buildings used to produce things), and technology. This leads to the central question encompassing the new economic case against immigration: what happens to productive gains associated with free migration if immigrants import with them the bad institutions that made their home countries poor in the first place? If immigrants bring with them the baggage of their motherlands, the economic gains from free migration could be partially wiped away or even reversed.

In their new book, Wretched Refuse? The Political Economy of Immigration and Institutions, Cato Institute’s Alex Nowrasteh and Texas Tech University’s Benjamin Powell join forces, brandishing empirics and theory instead of the usual sword, to rout the new economic case against immigration. These authors are well up to the task, too, as both have written extensively on the topic of immigration for both academic and popular audiences. This experience allows them to develop an interesting and informative combination of cutting-edge empirical analysis with easy-to-digest theoretical explanations of complex phenomena related to immigration and institutional analysis.

The fundamental purpose of this book is to empirically and theoretically explore the case for free immigration from the perspective of economic efficiency by studying what seems for now the last frontier of economic research on the effects of migration: the effects of immigration on institutions, both formal and informal, in the host-country. The authors begin their analysis by laying the foundation of this new debate on immigration. First, they outline the traditional economic case in favor of free mobility. They then acknowledge how immigrants’ impacts on host-country institutions could undermine this traditional case in favor of free mobility: this is the new economic case against immigration. The authors end the first part of their book by providing evidence on the positive impact of immigration, both high-skilled immigration and low-skilled immigration, on the proximate causes of productivity: human capital accumulation, physical capital accumulation, and technology accumulation. In particular, the authors note immigrants contribute to entrepreneurship, in the form of innovative patent activity and more traditional business creation.

However, cross-country research is fraught with potential statistical issues. To provide a more thorough evaluation of the issue, Nowrasteh and Powell turn to individual country case studies of instances of mass immigration or free immigration. Specifically, the authors analyze the United States prior to World War I and Israel and Jordan in the late twentieth century. In all three case studies, the reader will find immigration did not lead to a deterioration of host-country institutions. For example, immigration in the United States can be linked to the abolitionist movement, arguably one of the most important institutional improvements in U.S. history, and the secularization and expansion of public schools. In Israel, mass migration from Russia following the collapse of the former Soviet Union was accompanied by an increase in economic freedom and no significant increase in levels of corruption, despite the former Soviet Union’s notorious reputation for growth-hampering corruption. Finally, mass immigration into Jordan by Palestinian refugees resulted in an improvement in Jordan’s institutions so large that Jordan went from having the institutions of a poor Muslim country to the institutions of an OECD country.

Throughout their work, Nowrasteh and Powell candidly address seemingly every theoretically possible impact immigration could have on host-country institutions in a way that lends credence to their study. Indeed, the authors obviously believe the evidence to indicate free immigration to be desirable, but this by no means biases their sober reflection on the issue. This scholarly sentiment is nowhere more evident in the book than when they theoretically explore possible specific instances in which it might make sense to limit migration, relating these theoretical possibilities to national defense exceptions to the case for free trade.

Further, the empirical analysis in the book is exceptional. The reader is provided a variety of research designs utilizing both cutting-edge empirical techniques that attempt to tease out causality in a single-country case study, like the synthetic control technique, and more routine back-of-the-envelope estimations of the impacts of immigration on terrorism. The case against the new economic case against immigration is strengthened by looking not only at cross-country evidence with more external validity, but also single-country evidence with more internal validity.

However, this book is not without its faults. While Nowrasteh and Powell provide much-needed theoretical contributions to this debate, they also undermine their case for free migration in a subtle way at the beginning. Specifically, the authors claim gains from immigration to be greater than gains from capital mobility, because immigrants become more productive simply by moving (p. 29). However, capital also enjoys place-specific productivity, as the authors note when they ask the reader to imagine how difficult it would be to operate a business in an area with heavy terrorist activity (p. 123). Clearly such an area provides lower returns to capital much as it lowers productivity for workers.

I was also surprised at the writing style. The book reads more like a long academic article in many places, and I fear this writing style makes the book inaccessible to those who are not as familiar with academic writing and economic and statistical concepts. This was more surprising considering Powell has written a few quite accessible “pop-econ” books including his work on sweatshops (Out of Poverty: Sweatshops in the Global Economy. Cambridge: Cambridge University Press, 2014) and his work on the ills of socialism with Robert Lawson (Socialism Sucks: Two Economists Drink Their Way Through the Unfree World. New York: Simon and Schuster, 2019). The authors also claim to review the literature on the possibility of negative externalities associated with free movement of labor in its entirety (p. 274), but missed an account of the relationship between immigration and average IQ levels in the host-country, a topic popularized by George Mason University’s Garett Jones (see, for example, Hive Mind: How Your Nation’s IQ Matters So Much More Than Your Own. Palo Alto, CA: Stanford University Press, 2015). At the same time, I look forward to using this book as teaching material, and the rational and even-headed analysis provided by the authors should make any academic happy.

However, much as any losses from free migration are dwarfed by the potential gains, any flaws in this book are overshadowed by the thoughtful account of the most recent and sophisticated argument against immigration. This field of inquiry is new and represents the frontier of research concerning the impacts of immigration. The treatment of the subject provided by Nowrasteh and Powell provides us a “baseline of knowing something about the prevalence” of a negative externality associated with free migration (p. 275). The comprehensive evidence they provide indicates any negative externalities that do exist are not significant, much less enough to erase the massive estimated gains associated with free movement of labor. While this book by no means provides a conclusion to the debate, as the authors rightly admit, the burden of proof is now on those who still claim such negative externalities exist. Until then, maybe it’s time we start affording human beings the same privilege and respect we pay to the goods we trade.