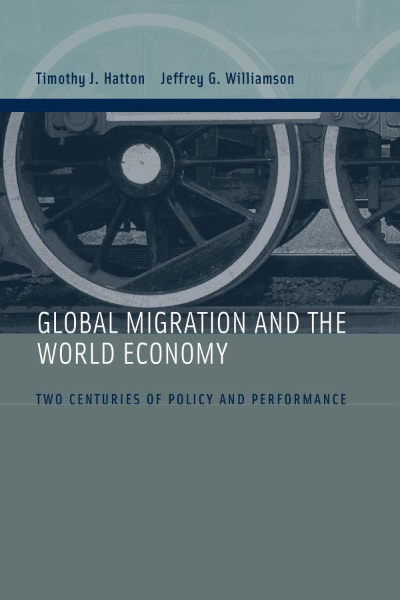 Global Migration and the World Economy
Two Centuries of Policy and Performance
By Timothy J. Hatton and Jeffrey G. Williamson
Kindle Hardcover Paperback
This book review appeared in the Winter 2007/08 issue of The Independent Review.

World migration since the Industrial Revolution is an always timely topic that normally generates hot political controversy, especially in host countries such as the United States today. In Global Migration and the World Economy, Timothy Hatton and Jeffrey Williamson, eminent economists and economic historians, perform the laudable service of reviewing world migration, nearly in its totality, over the past two hundred years. They seek to distill lessons from history that may shed lightinthe current debate about migration policy. Although their study is not one of overt advocacy, they encourage the reader to use their material to inform thinking on current migration issues, and they offer an occasional policy opinion of their own, though in an appropriately restrained manner given that they have produced primarily a massive work of scholarship.

The potential reader needs to know, first of all, that even though the book is organized according to a logical plan, much of it consists of a neatly packaged assemblage of the authors’ previous work published over many years. Hatton and Williamson acknowledge this aspect of the book with, to my mind, inappropriate understatement, though it must in fairness be pointed out that a considerable amount of editorial work and new research was most likely required to stitch together many articles, conference presentations, lectures, and the like to make a coherent, if not a seamless whole. The uninitiated but perceptive reader may be puzzled, however, by the uneven quality of the analysis. Some chapters are thorough and persuasive; others are interesting ruminations and conjectures for further work, garnished with a bushel of data, whose abundance makes the volume a reference work, among other things.

Thus, the argument of Global Migration lacks the rhetorical force and narrative drive of Friedman and Schwartz’s great book. This aspect of the work becomes a problem when at the end Hatton and Williamson declare victory in showing history’s relevance to the modern world.

Readers have a right to expect valuable slogans of the kind often found in works of this sort—“Appeasement be damned”; “Beware the Russian winter”; “Inflation is always and everywhere a monetary phenomenon”—but Hatton and Williamson do not offer any, at least not crisply. They declare, for example, their enthusiasm for greatly expanded immigration today, but they do not show how history reveals that current world immigration is too small. They do treat the costs and benefits of migration at some length, but overall they do not tie their material to their normative opinion, which verges on the gratuitous. Thus, what might have been a lesson from history seems to be by and large only the policy preference of two experts who do not trouble to argue the point.

Nevertheless, the authors do use history effectively in two ways. First, they make valuable comparisons of migration and, to some degree, globalization in general in the nineteenth and twentieth centuries. The practical significance of these comparisons is small, or at least the authors do not explain what the practical significance might be for today’s problems, but their treatment does enlarge the backdrop of the grand issue of migration and should excite anyone with even a modicum of intellectual curiosity. Other valuable comparisons of this sort on specific topics are scattered throughout the volume, creating a rich menu for further researchonthe causes and consequences of migration. Second, the vast temporal expanse the authors traverse allows them to apply their framework of analysis to a variety of cases. They hold that migration is explained by the same factors most of the time, just as Friedman famously found price inflation to be “always and everywhere” a monetary phenomenon.

One might question the suitability of the authors’ basic analytical framework, which relies mainly on three elements: transportation costs, the economic incentive to move, and potential immigrants’ level of income in the sending country or area. (Deviations from this paradigm are explained in terms of special circumstances, usually very interestingly and plausibly, but perhaps on occasion arbitrarily.) The income level is used as a constraint to explain why those with the biggest incentive to move—that is, the poorest elements of society—are underrepresented among actual migrants, who tend to grow in number as transportation costs fall. In other words, Hatton and Williamson invoke the hoary notion of a poverty trap that keeps people poor, in this case by preventing them from trying to better themselves, just as in the old economic development literature it kept them poor by preventing them from saving and investing in physical capital. It follows, moreover, that lack of private funding to overcome such an obstacle to personal freedom is a capital-market failure, an implication from which Hatton and Williamson do not shy away. Thus, elements of the “poverty explains all social ills” doctrine are crucial to their understanding of global migration, even though, it must be stressed, their scholarship eschews overt ideology or political proselytizing. Nevertheless, the evidence they present on the centrality of the poverty trap is thin. The reader may therefore understandably see their analysis as, among other things, an ingenious effort to resuscitate and relegitimize both the “poverty trap” in the sheep’s clothing of a lesson from history and the liberal article of faith that all personal qualities are evenly distributed in world population.

Among economists and other scholars today, however, poverty is more commonly seen as a symptom rather than as a cause of personal and social problems. Hatton and Williamson may have omitted in their analysis a variable with which poverty merely happens to be correlated. Their massive bibliography does not contain a single reference to the famous studies of historical migration by Thomas Sowell, whose sensibility is very different from theirs. Sowell has often pointed out that in many places immigrants have outperformed the natives of host countries economically, complicating politics in large parts of today’s developing world. For present purposes, Sowell’s work suggests that not economic means, but something other than income or wealth sets actual migrants apart from impoverished nonmigrants. Sowell’s lesson from history might be, “Where there’s a will, there’s a way.”

Finally, I must fault Hatton and Williamson for their overuse of empirical descriptive material. Perhaps overzealousness is the problem. Or perhaps the fault again lies in the book’s somewhat artificial composition. What was appropriate in the original presentations of their work is leaden when placed in close proximity to other work done in the same fact-laden style, especially when not all the facts or references to other literature are essential. This volume (and the massive bibliography) needed a good editor. Perhaps more to the point, drowning the reader in information further clouds the lessons from history that the authors claim to provide.

There is, moreover, a strange irony connected with Hatton and Williamson’s overweening descriptiveness and propensity to cite other writers on the subject: at times they paint important phenomena with surprisingly crude brush strokes for such meticulous, determined, and well-versed scholars. For example, nineteenth-century globalization, which forms the background of much of the discussion, is treated as nearly all of a piece in both time and space. This period was, the authors say accurately but without nuance, “the first global century.” They adopt without comment the venerable view that primary products from the Third World obeyed “vacuum cleaner” processes—that is, were drawn inexorably into the maw of world commerce, especially by falling transportation costs everywhere. Yet the rate of growth of world trade, including trade in primary products, varied substantially during the century, and sugar, the largest of all exports by value from the tropics and produced over the widest geographic area, was under severe competitive pressure from European beet sugar from 1860 until World War I. It is misleading to render the nineteenth century as Globalization Rampant, so that the tutelage that history offers the present may be less than Hatton and Williamson claim. In any event, appearances to the contrary notwithstanding, the authors sometimes choose poorly in what they amplify and what they gloss over—another instance of the lack of elegance that makes this sometimes penetrating volume less convincing than it should have been. In Global Migration and the World Economy, less would have been more.