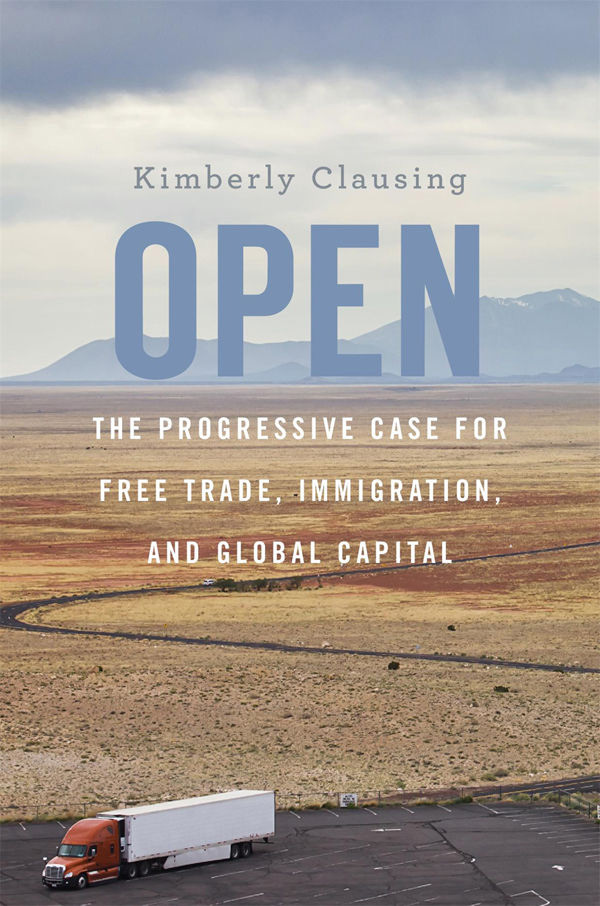 Open
The Progressive Case for Free Trade, Immigration and Global Capitalism
Kimberly Clausing
Kindle Hardcover Paperback
This book review is a web exclusive for the Summer 2020 issue of The Independent Review.

In Open: The Progressive Case for Free Trade, Immigration and Global Capitalism, author and Reed College economics professor Kimberly Clausing provides a stalwart economic and political defense of liberalized trade and immigration that even non-progressives should cheer. When the book strays beyond its subject matter and into progressive priorities like climate change, labor rights and economic inequality, however, it risks losing many readers and, unfortunately, her laudable case for freer trade and immigration in the process.

The book’s biggest strength comes, perhaps unsurprisingly, in its arguments in favor of globalization in its many forms. Chapter 3 presents the “compelling” case for international trade and explains why there is a longstanding economic consensus in favor of liberalized trade and against protectionism. The data cited therein are too numerous to list, but a few points warrant mention. For example, Clausing notes one study that finds the “collective impact of past economic sanctions...have been more deadly than the entire history of weapons of mass destruction, including large-scale acts of nuclear, chemical and biological warfare” (p. 56). She further dismantles prevalent claims that international trade causes net job destruction or depresses labor force participation, or that a switch to labor-intensive industries would be a net benefit for the U.S. economy. Instead, significant losses would accrue to export industries (which tend to pay better and have higher productivity) and their communities, consumers of imported industrial inputs like Boeing, U.S. companies that utilize global supply chains like Apple, and services firms (e.g., construction and retail) that would pay more and produce less without access to imports. Clausing also explains the strong correlation between trade and economic growth or unemployment, with “globalizer” countries consistently outperforming non-globalizers in both cases over several decades (and bringing billions of our fellow humans out of poverty in the process).

Clausing continues in Chapter 4 to address the so-called “losers” from trade, with some emphasis on the recent findings of economist David Autor and colleagues on the “China Shock.” While acknowledging those findings and associated employment effects of trade more generally, Clausing rightly explains that (1) subsequent research has shown the China Shock more likely to have redistributed U.S. jobs than to have destroyed them; and (2) economists have had difficulty distinguishing between job dislocations caused by trade and technology shocks more generally, with the bulk of the empirical work showing that the latter has had far more of an impact on U.S. labor markets than the former. She also puts these trade shocks into necessary context, explaining that the two million jobs supposedly lost to the China Shock between 1999 and 2011 are dwarfed by the six million jobs that the U.S. economy destroys in a single quarter. Finally, Clausing spends significant time showing that technological change has “swamped” any negative effects on manufacturing employment caused by trade, citing decades of increasing U.S. manufacturing output and a declining share of manufacturing employment in other developed and developing countries (including manufacturing powerhouses like Germany, South Korea and Mexico).

Clausing spends Chapters 5 and 6 debunking well-worn myths about U.S. trade agreements and the trade deficit. She notes, for example, that trade agreements like NAFTA and those underpinning the World Trade Organization have liberalized trade but have had a modest effect on U.S. workers, with domestic policy having far more of an impact. Significant trends in U.S. labor markets (e.g., wage stagnation for less-educated male workers), moreover, are shown to have occurred before the oft-blamed trade agreements entered into force in the mid-1990s. On the trade deficit, Clausing skillfully explains how it is driven not by trade policies but by broad macroeconomic factors (national savings and investment), and that, in any event, the U.S. trade deficit is on balance a benign phenomenon. She concludes that, should U.S. policymakers nevertheless insist on making trade deficit reduction a priority, trade policy actions would be ineffective at best and harmful at worst, and that a far more effective approach would be to reduce the U.S. budget deficit (which increases savings).

Finally, Clausing advocates several policy proposals that could help with the inevitable, yet ultimately beneficial, disruptions caused by liberalized trade and immigration, and which already enjoy broad, bipartisan support. This includes replacing trade adjustment assistance, which has been shown actually to deter the necessary adjustment of trade-affected workers and unfairly demonize trade as somehow worse than other forms of “creative destruction,” with a broader form of assistance that applies to trade, technology or any other disruption outside a worker’s direct control. Clausing’s proposals on reforming the Earned Income Tax Credit, for example, to better cover childless workers, providing “relocation” assistance to ameliorate disparate regional effects of trade liberalization (and improve lagging geographic mobility), and expanding community college funding also enjoy broad political and empirical support.

Altogether, Open provides a comprehensive rebuttal to many of the most common arguments against liberalized trade and immigration and in support of economic nationalism, as well as an easy-to-read primer on trade economics and policy and a good starting point for better policies to support low-income workers and beneficial labor adjustment. Ideally, Clausing would have extended her rebuttal to some of the more increasingly prevalent or sophisticated critiques of trade liberalization (beyond her useful discussion of the “China Shock” literature). For example, Clausing rightly notes that U.S. manufacturing output is at or near record highs, but more sophisticated critics often counter that the topline data are overstated, reflecting primarily the growth of U.S. semiconductor production and computing power, or obfuscate essential parts of the U.S. supply chain that have been eliminated. Clausing discusses trade “shocks” but not the popular claim that they are much more disruptive and harmful than other types of shocks, for example those due to automation or technology. The book also lacks significant discussion of perhaps the most common current criticism of free trade, particularly on the right and in the Trump administration: that trade liberalization, despite its aggregate economic benefits, undermines national security (e.g., by enabling the rise of China and destroying critical domestic industries). And, finally, Clausing explores the benefits of trade for the poor and middle class, but spends little time dispelling the myth that trade liberalization is the result of corrupt, corporatist lobbying at the expense of the “working class.”

There are strong rebuttals to each of these criticisms—for example, studies showing the corrupt historical roots of American protectionism, that trade shocks tend to be less disruptive than technology shocks, or the close connection between trade and peace—and they would have elevated the book’s utility for laymen and experts alike. It is a missed opportunity, but certainly not fatal.

More concerning, however, is Open’s move beyond trade and immigration policies into issues that are mostly disconnected therefrom. Clausing assumes, for example, that there is a consensus in the United States that “the most pressing economic problems of modern-day America” (p. 4) are inequality, corporate profits and labor’s declining share of national income relative to capital. But these issues, while no doubt pressing for many progressives, are likely not priorities for many Americans (not just conservatives and libertarians) and are therefore unlikely to motivate support for trade and immigration policy. Gallup (2019) finds, for example, that there is “little evidence” most Americans care about inequality, regardless of how the question is asked.

To the extent that these issues are politically important, moreover, there is substantial economic literature showing a strong connection between more liberalized trade and less economic inequality. For example, International Monetary Fund economists in 2019 examined data for 151 countries between 1963 and 2014, and found that tariff increases lead, in the medium term, to significant increases in inequality. Protectionism, meanwhile, has been repeatedly shown mainly to benefit protected companies’ senior management, as opposed totheir U.S. workers. Given the book’s focus on trade and inequality, its omission of these points is disappointing.

Similarly, the majority of Clausing’s policy solutions have little apparent connection to trade or immigration, and connecting them to trade policy might actually thwart, not help, needed reforms. For example, the book dedicates an entire chapter to a “grand bargain” for tax policy, which includes higher corporate and personal taxes, new taxes on capital (including, it appears, individual 401Ks), and new carbon taxes—policies that seem to have only a tenuous connection to trade and immigration. It appears Clausing sees these disconnected policies as a balm to soothe those in “economic pain” (p. 243) and thereby achieve new support for trade liberalization, but these policies are far from uncontroversial, and by linking them to trade, they are just as likely to turn many Americans against reform instead of in favor of it.

These contradictions inevitably left this reader, not primed to accept standard progressive talking points on inequality and climate change, questioning Clausing’s motives: does she intend to use progressive policies to buy off trade-skeptical voters or to use trade policies to buy off progressive-skeptical voters? Either way, the plan seems unlikely to work and unfortunately sours an otherwise-praiseworthy contribution to the current debates on U.S. trade and immigration policy.