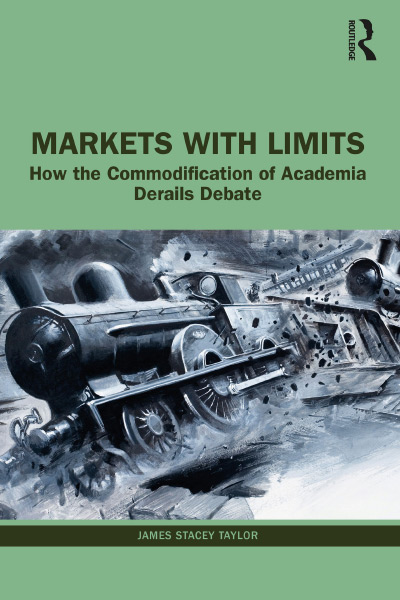 Markets With Limits
How the Commodification of Academia Derails Debate
By James Stacey Taylor
Kindle Hardcover Paperback
This book review is a web exclusive for the Summer 2022 issue of The Independent Review.

I haven’t been this happy since Kylie Jenner and Black Chyna had a beef over who was dating Tyga. See, Chyna was engaged to Tyga, and Tyga left her for Kylie, and Chyna did this white-face look with oversized, artificial lips photo, because Kylie is supposed to have had “some work done,” and ... well, it was epic.

But philosophers can have just the same sort of claws-out public kerfuffle, even if (as far as I know) no ex-fiancés are involved. See, in 2016 Jason Brennan and Peter Jaworski published this book, Markets Without Limits: Moral Virtues and Commercial Interests (2016, New York: Routledge). The reductionist version of their thesis is that anything that can morally be done, can also morally be done for money. If I can donate my kidney legally, then I can be paid to sell my kidney; if I can have consensual sex, then I can pay someone to have consensual sex with me; and so on.

To say that reviews of the book are mixed is an understatement. My longtime Duke colleague Jonathan Anomaly had a largely positive view; Geoffrey Hodgson had a more assorted reaction; Jeffrey Moriarty was not convinced at all. I myself am on record concurring in part and dissenting in part.

J.S. Taylor, another philosopher, has taken a view that goes off in quite a different direction. Jason Brennan is an Arizona PhD, and so has “West Coast” loyalties; Taylor is pure “East Coast” (in fact, Scotland), and wonders what Brennan thinks he’s on about. Taylor’s new book, Markets with Limits: How the Commodification of Academia Derails Debate, aims at Brennan’s work not only as wrong, but as asking the wrong question. Worse, the rewards that philosophers such as Brennan have reaped from asking cleverly wrong questions have actually ruined political philosophy and require a rethinking of the entire enterprise.

Taylor’s thesis is, as many of my UK friends describe such things, “too clever by half.” It is clever, since it actually argues that Brennan and Jaworski’s approach not only fails on its own merits, but the success of their mistaken book is an avatar of the failure of academic discourse. Brennan and Jaworski argue that commodification cannot be immoral, and in fact cannot even be harmful on net, if the underlying activity is itself morally acceptable and socially beneficial. Taylor responds that the (as he calls it) “Asymmetry Thesis”—the claim that there are things that can be given freely, but not sold—is not actually held by those whom Brennan and Jaworski target for criticism. Therefore, Taylor argues that the debate over that question is beside the point, or “derailed.”

Which leads to the larger point: Taylor says, in effect, that this problem of commodification of debate in publication has derailed much of the academic profession. Not that Brennan and Jaworski have personally caused the corruption of scholarship by commodification, but Taylor sees their work as a salient example of the problem.

An intellectual debate, conducted on the merits and animated by a shared search for truth, with common rules of what constitutes acceptable arguments, and truth tokens, is the matter that properly occupies the minds and the time of serious professors. Such arguments are “given” freely, published in refereed academic journals. But Taylor sees the desire to publish provocative arguments, and get paid for it, and later to attract citations, and get paid for it, as having commodified intellectual discourse. The commodity is the journal article, and professors get paid for “publishing” these widgets, without regard to the value of the content or the importance of the ideas that the articles contain.

Consequently, far from having proved that anything that can be given can be sold, Brennan and Jaworski are an example of precisely the way in which creating a homogeneous commodity—the “publication”—for sale changes the nature of the thing once offered freely and authentically. Writ large, this commodification of scholarship that should be done in service of truth has derailed academic merit. (The picture on the front of Taylor’s book, unsubtly, is a terrifying train wreck centering on a runaway locomotive. The destructive engine does not actually have “Jason Brennan” stenciled on the side, but no one is confused about the symbolism.)

For my own part, in addition to watching a good beef play out in public, I think that there is some merit to Taylor’s claim. I don’t agree that Brennan and Jaworski are uniquely, or even centrally, at fault, because Markets without Limits has been a useful—if reductionist—riposte against simplistic moralizing by the Michael Sandels of academic philosophy. Reductionism in philosophic argumentation can accomplish something analogous to the role of models in economics: we all understand that models are abstractions inadequate to capture fully a complex reality, but judicious use can be very valuable.

Taylor’s larger points, about the commodification of academia, often focusing on metrics such as the number of publications or the quantity of citations, is an important one. Providing a decisive refutation of a view that no one holds, and then defending that position from people who don’t actually disagree, has created scholarly “debates” conducted at a level of seriousness not much above the “made for Twitter beefs” where rap stars fuss at each other through social media and loyal proxies. This shallow commodification has substantially derailed the very idea of scholarship, and what it means to live the life of the mind.