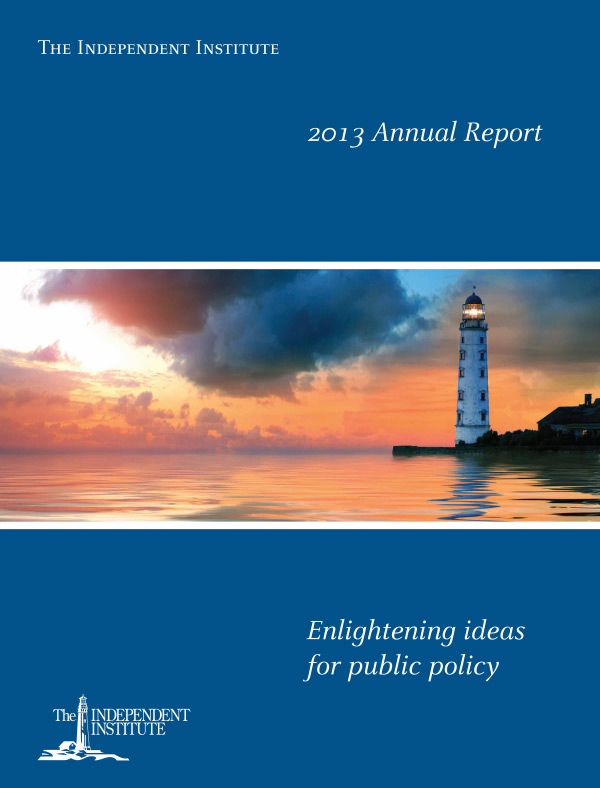 A Message from the President

When I founded the Independent Institute in 1986, America’s national debt was about $2 trillion. Today, it is over $17 trillion—more than triple the debt in 2001. Despite runaway federal spending and debt and an explosion of new federal regulations and mandates, President Barack Obama’s second inaugural address called for even greater government spending and power: “preserving our individual freedoms ultimately requires collective action.”

Does this mean that we are destined for fiscal ruin and further loss of liberty? On the contrary! Polls indicate that Americans are increasingly skeptical of Big Government schemes at home and abroad. And we agree.

The Independent Institute sees this as a time of tremendous opportunity for winning the vital battle of ideas—supplying clear thinking in redirecting and redefining the public debate, with a fresh consideration of solutions consistent with individual liberty, personal responsibility, civic virtue, free markets, and the rule of law. After twenty-seven years, our growing reputation for principled studies of today’s most pressing issues is taking hold in the public square.

Senior Fellow Robert Higgs’s early work on government growth and regime uncertainty has gained attention in the mainstream media. His prescient book, Crisis and Leviathan: Critical Episodes in the Growth of American Government, is now available in a 25th Anniversary Edition.

During this past year, we produced eight new books and dozens of eBooks; received two Eric Hoffer Book Awards and two IPPY Awards for Best Book; had Fellows testify before congressional committees; conducted our popular Challenge of Liberty Summer Seminars for Students; and achieved a record combined reach of 4 billion across Internet and news media!

We also made a strategic commitment to increase our presence in video and social media, and it is paying off! We have posted hundreds of videos online and are producing a new video series on issues of the day, called Independent Watch. Our Google Ad Grant has generated more than 400,000 new site visits to date, and we have grown our Facebook fans to 390,000 and our Twitter followers to 9,000, and through them we are reaching 3.5 million per month!

We strive to make the Independent Institute’s program among the most cost-effective of any educational or public-policy organization; with G&A accounting for only 7% and Fundraising 8% of expenses, nearly 85¢ of every dollar go directly to Program Services to produce and broadly disseminate our award-winning analysis and solutions.

I invite you to enjoy this report’s summary of the Independent Institute’s work for fiscal year 2013, and thank you for your interest in building popular, informed support for liberty and in reestablishing the moral and cultural imperative that attains the free, prosperous, and peaceful society America’s Founders intended.