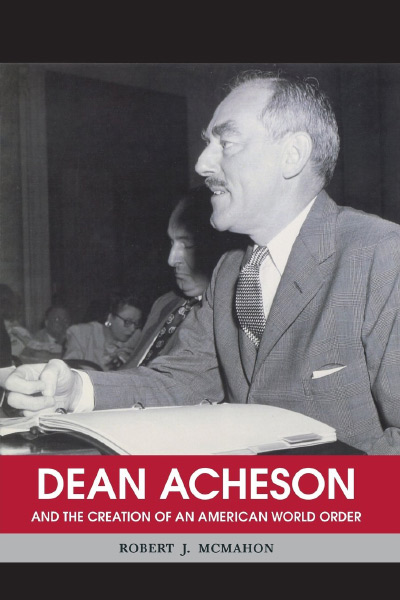 Dean Acheson and the Creation of an American World Order is the first book in the Shapers of International History series edited for Potomac Books by Melvyn P. Leffler, the Edward Stettinius Professor of History at the University of Virginia. Robert J. McMahon, the inaugural author, has published several previous works on international affairs and is currently the Mershon Distinguished Professor of History at Ohio State University. McMahon provides a short overview of Dean Acheson’s early life and then a detailed chronological examination of important policy decisions he made or influenced. Whatever one’s views on the merits of Acheson’s foreign-policy decisions, most knowledgeable persons would agree that he is a reasonable choice for the opening book in the series, and McMahon ably portrays him both as a private person and as a public figure.

Reared in comfortable circumstances in New England, Acheson found life at Groton difficult. At Yale, he began to develop socially, but McMahon argues it was Harvard Law School that left a lasting imprint on Acheson. Finishing fifth in his class at Harvard Law, Acheson immersed himself in legal study and established a relationship with Felix Frankfurter that developed into a lifelong friendship. From Harvard, he moved to a clerkship with Supreme Court justice Louis D. Brandeis and then, at the young age of thirty-two, to a partnership in the prestigious Washington law firm Covington and Burling. McMahon is convinced that Acheson’s association with Frankfurter, Brandeis, and Oliver Wendell Holmes Jr. shaped him into a pragmatist who focused on practical problems and avoided abstract rhetoric, and throughout the book he describes numerous critical situations in which Acheson’s skills in negotiation and persuasion carried the day.

McMahon portrays Acheson’s relations with the Roosevelt administration as strained throughout much of the 1930s. After a brief period in the Treasury Department— part of it as acting secretary—his disagreements with President Franklin D. Roosevelt’s cavalier approach to financial policy forced him to step down and return to private practice. The specter of aggression by totalitarian regimes abroad, however, brought him back into the public eye as he ardently supported efforts to help the Allies, especially in Europe, and Roosevelt moved him into the State Department, where he eventually became undersecretary of state in 1945, before moving into the top job in January 1949. After the war, Acheson did not immediately recognize the dangers the Soviets posed; McMahon says that he did not do so until the latter half of 1946. Until that time, he sought cooperation with the Russians and even suggested sharing America’s atomic secrets—a position that President Harry S. Truman rejected. Soviet maneuvers in Turkey and Greece finally convinced Acheson that the Soviets were seriously imperialistic in their goals, and he strongly supported the ensuing Truman Doctrine. McMahon suggests that Acheson never had much concern about Communist ideology. In Acheson’s mind, the real danger from Communist regimes came from their ability to upset the balance of power by means of their economic and military resources.

In chapter 3, McMahon chronicles Acheson’s work in postwar western Europe, a region that remained the center of his attention throughout the rest of his life. Acheson vigorously supported the Marshall Plan and labored diligently to establish the North Atlantic Treaty Organization. He promoted the “useful fiction” (p. 75) of western Europe as a region of similar states with a common heritage in order to integrate the Germans into theWest and to construct a credible line of defense against the Soviets. One unfortunate consequence of giving so much attention to western Europe was the neglect of Asia, and in the ensuing chapter McMahon broaches the implications of this posture for the Truman administration.

In regard to foreign policy, the late 1940s and early 1950s were a difficult time for Acheson, Truman, and Americans in general. In 1949, President Truman announced the Soviet detonation of an atomic bomb, and the Communists celebrated their conquest of mainland China. Highly critical of the Nationalist Chinese, Acheson faced the brunt of the China lobby’s charges of defeatism as well as the more general attacks by Senators Robert Taft and Joseph McCarthy. This abuse was exacerbated when the North Koreans crossed the thirty-eighth parallel in 1950 and achieved unexpected early successes against U.S. and South Korean troops. Throughout the Far East, the Western powers and their allies were on the defensive.

Until then Acheson had given little attention to the Far East, but he reacted in “masterly” (p. 128) fashion to the North Korean attack, rallying international support and backing a strong military response in government policy councils. McMahon contends that the Korean conflict was a “critical turning point” in postwar foreign policy, although others might suggest more precisely that the real rupture for the West occurred at the Yalu River, where, after clear warnings, the Chinese entered the war. McMahon plays down this aspect of the war, as he does other areas of Asia. He gives some attention to Indonesia, Indochina, and Iran, but he discusses these countries in terms of European interests because that is how Acheson viewed them. The secretary of state feared that the huge military and financial commitments by the Dutch in Indonesia and the French in Indochina would damage the Marshall Plan’s economic recovery goals, and he failed in his attempt to broker a compromise between British Oil and the Iranian government. McMahon turns his attention back to the European theater as Acheson moved toward retirement and records the secretary’s disappointment in failing to accomplish what he regarded as a satisfactory integration of West Germany into a European community.

With Eisenhower’s victory, Acheson assumed the role of elder statesman within the Democratic Party. McMahon notes that Acheson tended to be highly critical of those in power, whatever their partisan affiliation. Nonetheless, President John F. Kennedy consulted him when Khrushchev threatened West Berlin and during the Cuban Missile Crisis. In both incidents, Acheson took a hawkish position, arguing for a strong military posture in Berlin and immediate military action in Cuba. During the Johnson administration, he was originally also a hawk on Vietnam, but he came to recognize the unacceptable costs of an American victory there. Again, perhaps reflecting Acheson’s limited background in Asian affairs, McMahon argues that Acheson saw Korea and Vietnam as analogous.

McMahon does a commendable job of presenting Acheson and his times, which, of course, is the purpose of the books in the series. He clearly admires Acheson’s intellect and his interpersonal skills but concedes his blemishes. He notes, for example, that Acheson admired and worked easily with Truman, the failed haberdasher from Missouri who had only a high school education, but at the same time he had a tendency to be arrogant, abrupt, and condescending to those who did not meet his standards of integrity and intelligence. Perhaps the book’s title best conveys McMahon’s sense of Acheson’s importance. Acheson’s work in western Europe did indeed provide a basis for the demise of the Soviet Union and the secure and prosperous status of much of Europe today. In another respect, however, McMahon’s assessment of Acheson’s impact misses the mark. During Acheson’s tenure in the State Department, America’s failings in Asia were stark and costly in terms of its position in the world and in terms of American lives. One does not have to be an adherent of the kind of conspiracy theories propounded by Joe McCarthy to question what was gained by the drive to the Yalu River or by Acheson’s continued support of the French in Indochina.

Nowhere in this book does McMahon seriously question the limits of extraordinary legal skills in the formulation and execution of foreign policy. Again and again he appears enamored of Acheson the accomplished litigator. For example, he describes Acheson’sMarch 18, 1949, speech in support of a North Atlantic defense organization as “a tour de force by a master rhetorician” (p. 84). Moreover, McMahon frequently cites the influence of Holmes, Brandeis, and Frankfurter. However, notwithstanding Acheson’s facility with practical issues and outcomes, which can serve an effective litigator well, he seems at times to have lacked the historical and cultural depth necessary for thoroughly grasping critical foreign-policy issues. Thus, his failings in the Far and Middle East may have reflected both a lack of interest and a lack of background.

In his conclusion, McMahon effusively restates Acheson’s influence on postwar foreign policy. He emphasizes that for Acheson the primary goal was a world secure for the United States, a world in which Americans possessed predominant power. Moreover, he is candid in his assertion that Acheson saw this power primarily in military terms. To be fair, there was every reason for someone who had just experienced the most devastating conflict in history and was facing a heavily armed Soviet Union to think largely in military terms. Nevertheless, it also seems fair to suggest that someone more attuned to the entire world and schooled in its historical and cultural diversity might have sensed that in China, Vietnam, and the Middle East, the hegemony of Western military power was already crumbling.