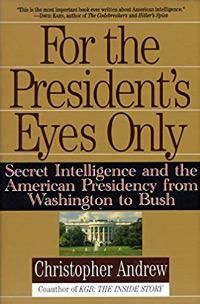 For the President’s Eyes Only
Secret Intelligence and the American Presidency from Washington to Bush
Christopher Andrew
Hardcover Paperback
This book review appeared in the Winter 1996/97 issue of The Independent Review.

Christopher Andrew’s book examines in critical detail the use and abuse of the intelligence community throughout the history of the American presidency. Andrew provides a lucid narrative surveying how presidential ignorance and misconceptions concerning intelligence matters led directly to a number of perceived “intelligence failures.” Overall the book is tough but fair regarding presidential performance. Andrew concludes that “only four American presidents—Washington, Eisenhower, Kennedy (briefly), and Bush—have shown a real flair for intelligence” (p. 537).

Andrew adroitly demonstrates that “intelligence gathering” was not taken seriously for most of the early history of the United States. The interest of one future president, General Zachary Taylor, is described as “barely [going] beyond peering at the enemy through binoculars” (p. 14). Interest alone seldom produces successful use of intelligence by presidents. For example, President Abraham Lincoln, while exhibiting a strong interest in intelligence, demonstrated little acumen. Lincoln personally recruited William Alvin Lloyd, a publisher of railroad and steamboat guides in the southern states, as a spy. Lloyd’s activities can be described as truly farcical, and the value of the information he provided was minimal. After Lincoln’s assassination, Lloyd returned to Washington to find that Congress refused to pay him. His promised remuneration was not secured until a Supreme Court decision, which ironically upheld an important presidential prerogative—the right to employ secret agents. Even with Lincoln’s interest and personal involvement, he did not take intelligence gathering seriously enough to work toward a centralized intelligence service.

According to Andrew, time and experience had little impact on the lack of seriousness placed on gathering intelligence. Although President Woodrow Wilson supervised the creation of the first professional intelligence staff in U.S. history, Wilson “paid scant attention to it” (p. 60). Instead, he devoted his energies to creating the higher moral plane of open diplomacy, where intelligence collection would be “obsolete” (p. 61).

Franklin D. Roosevelt’s stint as assistant secretary for the Office of Naval Intelligence during Wilson’s presidency made him one of the first presidents to have hands-on experience with intelligence prior to taking office. Yet, even with FDR’s background, he made few improvements in the professionalism or efficient use of the intelligence services. A major theme permeating Andrew’s two chapters on FDR is the sophomoric nature of FDR’s understanding and use of the intelligence assets at his disposal. This is seen in FDR’s predilection for private sources of intelligence. One such group, known as “The Room,” was organized by millionaire publisher Vincent Astor and a number of like-minded dilettantes. The antics of this and other private services graphically illustrate what Andrew calls the “element of fantasy” in FDR’s understanding of intelligence (p. 133). It also matches the author’s description of FDR’s bias against SIGINT (signal intelligence) in favor of HUMINT (human intelligence). Andrew goes to great lengths to demonstrate that while “SIGINT provided him with the best intelligence in the history of warfare,” FDR still dreamed unrealistically of creating elaborate networks of penetration agents (p. 139).

Another important theme of Andrew’s book is the overall fealty of the intelligence services to the dictates of the American presidents, even to poorly thought-out directives such as the Bay of Pigs operation. Andrew chronicles numerous presidential abuses of intelligence services from Herbert Hoover’s authorized break-in of the Democratic party headquarters to a very similar act sanctioned forty-two years later by Hoover’s eighth cousin once removed, Richard M. Nixon. The chronicling of the Watergate debacle not only provides some of the most humorous anecdotes of the book, but aptly demonstrates the futility of trying to cover up covert operations gone awry. This was a lesson relearned by Ronald Reagan, whose administration was tainted by the inappropriate use of intelligence assets during the Iran-Contra scandal. In each case, Andrew demonstrates how intelligence services have faithfully carried out presidential directives, even unethical or illegal ones.

In discussing the loyalty of the intelligence services, Andrew demonstrates the difficulty the agencies had in dealing with the assumptions, idiosyncrasies, and outright biases of the individual presidents. Presidential views of the intelligence community varied widely. Lyndon B. Johnson and Nixon believed that the CIA had previously conspired against them (pp. 309, 350), and Carter is described, by then Director of Central Intelligence George Bush, as exuding a “deep antipathy to the CIA” (p. 426). Bush, as a former head of CIA, understood the limits of intelligence operations better than any other president. In addition, Bush was popular with the intelligence community because he gave analysts what they craved—feedback on their work. In times of crisis, Bush did not simply rely on summary reports; he always wanted to know what the local station chief thought of the situation (p. 505). Throughout the book, Andrew documents the impact of presidential personality and style on intelligence operations.

In discussing the various levels of presidential skill in utilizing intelligence reports, Andrew states, “how they have used [intelligence] is an essential—though frequently neglected—part of the history of every administration” (p. 537; italics in original). “How” a president used intelligence depended on the assumptions inherent in his worldview. A number of “intelligence failures” arose in part from erroneous assumptions held by presidents and their senior advisors that affected how intelligence analysts couched reports to the White House.

The North Korean invasion surprised the Truman administration, whose leaders had not anticipated that the Soviet Union would view Korea as contestable; it occurred to no one that the initiative might have come from Kim Il Sung. Similarly, the entry of 300,000 Chinese into the conflict came as a surprise because no one expected the Soviets would involve the Chinese. Intelligence assessments, according to Andrew, were distorted by false assumptions about monolithic Soviet control of the entire Communist world that the White House did not question. Andrew cogently demonstrates that the “failure” of intelligence to predict the Tet Offensive and the Yom Kippur War similarly arose in part from stubborn refusal of the president and his advisers to accept data that disagreed with their preconceptions.

From the simple cipher codes of Washington to the advent of real-time intelligence gathering devices utilized during the Gulf Conflict, the level of available technology has increased exponentially. The author does an admirable job of demonstrating the double-edged nature of this technology. The technological abilities that “awed” Margaret Thatcher on her visit to Cheyenne Mountain also create “exaggerated expectations” in those who use the intelligence (p. 538). Andrew correctly places a good deal of the blame for the exaggerated expectations back on the intelligence community, which was so eager to impress each incoming president with the sophistication of its product that the limitations were consciously and consistently played down.

Andrew has produced a book that equals the best of his previous work—in itself a feat. For the President’s Eyes Only is an important contribution to the literature on the U.S. intelligence community. It is true, as Roy Godson states in Dirty Tricks or Trump Cards: U.S. Covert Action and Counterintelligence (Washington: Brassey’s, 1995, p. xi), that “the intelligence equivalents of Sun Tsu or Clausewitz have yet to appear.” Still, Andrew’s book comes admirably close as an academic treatise documenting presidential involvement in matters of intelligence. Like the works of Sun Tsu and Clausewitz, it has value to both serious generalists and scholars. For generalists, the book has breadth equal to that of G.J.A. O’Toole’s Honorable Treachery: A History of U.S. Intelligence, Espionage, and Covert Action from the American Revolution to the CIA (New York: Atlantic Monthly Press, 1991) and is more accessible than Stephen F. Knott’s Secret and Sanctioned: Covert Operations and the American Presidency (New York: Oxford University Press, 1996). Students of the intelligence community will appreciate not only the detailed scholarship but the important themes that permeate the volume. It is a vital addition to any library.

Andrew is perceptive to focus on the importance of how presidents use the information provided to them. Future presidents, facing a more complicated and still dangerous world, will continue to find an enormously expensive and technologically advanced intelligence system “both fallible and indispensable” (p. 541).