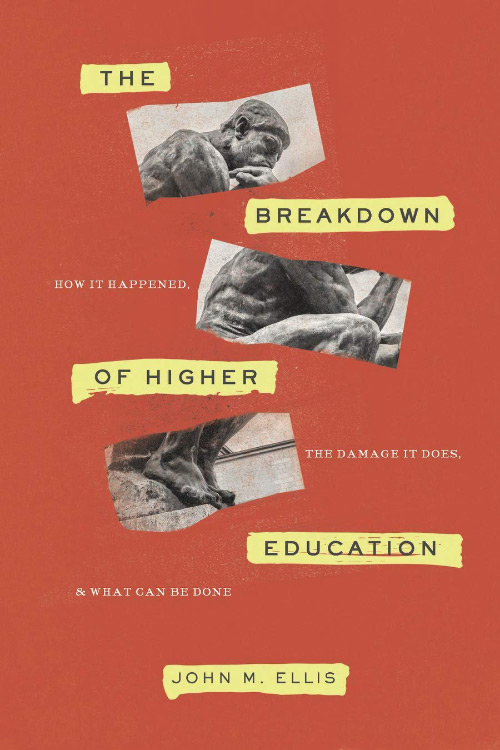 The Breakdown of Higher Education
How It Happened, the Damage It Does, and What Can Be Done
John M. Ellis
Kindle Hardcover Paperback Audiobook
This book review appeared in the Winter 2020/21 issue of The Independent Review.

Since by now nearly everyone who cares about American universities knows that leftists have taken over most of them, why do we need another book on the subject? For several good reasons. Few people realize quite how bad things have become, what caused them to go so wrong, how bad the consequences are, and, most important of all, what might be done. The distinguished literary historian John M. Ellis has now provided an impressive analysis in this concise and readable volume. Retired from the University of California’s “experimental” campus at Santa Cruz, a veteran of the post-structuralist and deconstructionist wars through his many books and articles, he knows who the murderers are and where the bodies are buried.

Ellis cites the many studies that have demonstrated the preponderance of leftists among American university professors but adds two points that are less well known outside universities. First, the imbalance is growing steadily worse. Along with other evidence, Ellis mentions a study of Stanford and Berkeley professors published in 2004, which found that “[t]he left/right party registration imbalance was 8 to 1 for full professors, but the figure for the two junior ranks [assistant and associate professors] taken together was an astonishing 49 to 1” (p. 33). Second, he notes that most universities no longer bother to disguise their embrace of leftism: “Up until about 2016, we commonly heard denials from the campuses that they were effectively one-party ecosystems where right-of-center voices were rarely heard. Those denials have now stopped. Instead, we now see an unashamed and quite open suppression of conservative voices” (p. 35). Today, candidates for jobs and tenure and promotion within the University of California system and a growing number of other institutions must demonstrate their commitment to “diversity” as defined by leftist identity politics and can expect their applications to be rejected if they refuse this loyalty oath, regardless of their academic qualifications.

Ellis explains how the enormous growth of universities and faculties in the 1960s “set in motion a shift from the 45 to 27 left/right ratio among faculty in 1969 to the virtual shutout of one side that we see today” (p. 28). Inevitably, as he says, “a huge expansion of faculty members . . . will bring in many less able people who are not confident of their place in the fiercely competitive world of the university, and therefore more likely to be susceptible to fashionable attitudes and political currents” (p. 54). The many professors of this sort who were hired during the expansion that ended around 1970 were ready to welcome the assertions of post-structuralists and deconstructionists that factual truth, logical reasoning, and literary quality are nothing but fictional “constructs.” These claims served as comprehensive excuses for those who got their facts wrong, made fallacious arguments, and wrote incomprehensibly. Moreover, as Ellis observes, “[n]ew fads and fashions in criticism are a way in which people who have no real originality of thought can find something new to say—or at least appear to do so” (p. 59).Not all of these people were originally leftists, but they had no intellectual defenses against leftists when the leftists declared that generally accepted knowledge had merely been “constructed” by the representatives of Western civilization and capitalism to oppresswomen,minorities, and others. Meanwhile, traditional academics were slow to see what was happening and had no idea how to combat it because, as Ellis says, “[s]erious academic scholars are used to going their own individualway. . . .But political radicals knewverywell howto organize themselves for a common goal, and how to create pressures that academics were not used to dealing with” (p. 61). The leftists may not have changed many minds, but they managed to dominate hiring, and that was enough to give us the universities we have now.

These universities no longer provide a comprehensive or rigorous education. As measured by a variety of tests, college students’ basic knowledge and reading, writing, and reasoning skills have declined dramatically. Most radical professors “would rather leave students in a state of ignorance than give them anything that might increase their understanding of their civilization’s history, because that understanding might increase their regard for it and thereby weaken the case for radical social change” (p. 97). Because colleges train our schoolteachers, they also shape our primary and secondary schools. “When college campuses stop teaching students how to think and instead tell themwhat ideology theymust commit to, that dereliction of duty trickles down to the high schools and produces the same kinds of disaster in both places” (p. 107). Because both schools and colleges train citizens, they also affect politics. “The political life of the campus must be poisoned in order to sustain the one-party monopoly. And it is precisely this kind of poison that is spreading into the political life of the nation, which is why our national political culture is now more spiteful and hostile than it has been for some time” (p. 115). And education affects not only our politics but also our whole society, culture, and economy. “Excellence in higher education was one of themajor reasons for this nation’s success, but we are now living off the college education that was received by people who are age fifty and over” (p. 172). Even graduates who react against their educational indoctrination by voting Republican will remain poorly educated.

This sequence of events is more perceptively described and explained in The Breakdown of Higher Education than inmany earlier books on the subject, and it performs the important service of bringing the story up to date because the process of destruction is proceeding so quickly. Ellis is (like me) a longtime member of the thoroughly sensible National Association of Scholars, and he served for several years as president of its affiliate, the California Association of Scholars. He presumably hoped (like me) that such organizations of professors could not just call attention to academic decline, as they have done, but reverse it; he has now realized that the latter ismore than they can do. “The problem is one of personnel, not of rules or guidance. . . . Because the campuses are controlled by the very people who are the source of the problem, they can no longer be reformed from within” (p. 182, emphasis in original). Ellis (like me) is unwilling to give up, however, because the leftists are absolutely right about the power of higher education. But who is going to come from the outside to rescue the universities?

Ellis’s main answer is state governments. They still contribute a substantial (though shrinking) percentage of state universities’ budgets, and they should be able to withhold much or all of that money if their state universities fail to make improvements. Though Ellis harbors no illusions about state governments controlled by liberals, he has hopes for conservative states. If “just one state” would reform its university, he says, “Students and faculty from across the nation would flock to that institution. . . . It might be able to build an outstanding faculty and become the de facto leader of American higher education, whatever the rank it formerly had among the nation’s universities. It could become the standard against which all others are compared, because the general public would see a clear example of what it really wants” (pp. 189–90).

Having agreed with almost everything Ellis has said up to this point, here I must differ with him not about what is desirable but about what is feasible. Reforming an existing university has been tried—by John Silber at Boston University from 1971 to 2003, first as its president and then as its chancellor. Silber was a forceful and determined character with an unusually good idea of what was needed to create an excellent traditional university. Starting when universities in America were far healthier than they are now, he enjoyed a long tenure and the staunch support of his trustees. After almost constant rancor and combatwithmost of his faculty, he had an impact, but he nonetheless failed to make BU into a first-rank university (that is, a university comparable to Harvard, Princeton, Yale, Stanford, and Berkeley) or even a predominantly traditional one. Though Silber’s personality was abrasive, the same would probably have been true of anyone else with the iron will required for even as much success as he achieved. He simply faced too much resistance from his faculty, which in the end he was unable to overcome.

As a conservative Republican citizen of Missouri, a state with a conservative Republican governor and legislature, I suspect Ellis of idealizing Republican politicians in states like mine. Although most of them are decent and reasonable people, they hate to spend more money, dislike too much controversy, are reluctant to think far ahead, and want their universities primarily to provide credentials for constituents and to field winning athletic teams. If carefully lobbied, such politicians might be willing to impose spending limits on their universities’ bloated administrations, which, as Ellis realizes, would be a real if not crucial improvement. But truly reforming any existing university would require hiring with exceptional care a large cohort of new professors in a wide variety of fields. Even if the governor were able over time to manipulate the educational bureaucracy to appoint the ideal university president, I strongly doubt that any Republican state government, even if it never lost an election, would be willing to spend the necessary money and to show the necessary defiance of existing administrators and professors to enact significant reforms in any state university system. In the wildly unlikely case that all of this happened, the result would be a university that was gripped by acrimonious controversy for years, making it an example that other universities would want not to emulate but to avoid.

In an endnote, Ellis mentions my own proposal in my recent book The University We Need: Reforming American Higher Education (New York: Encounter Books, 2018). There I propose founding a new private university in a new university town, where the president and trustees would have a free hand to hire all the administrators and professors from scratch. Ellis remarks, “Whether a gift in the amount needed could be found is uncertain, but the idea of creating competition for the politicized campuses goes in the right direction” (p. 203 n. 19). He has of course identified the problem:we are short one billionaire ready to provide the money. But that is truly all we lack. If a substantial sum were pledged, smaller donors and the profits from selling real estate in a new university town would assure the university’s future. Especially if the university offered top salaries and were located in an appealing place, such as the Washington, DC, suburbs, as I suggested, most of the best remaining traditional academics in the country (and the world) could be attracted there. The United States has many billionaires, and a little reflection should convince one of them that a billion dollars spent on such a university could change history—and give the donor a place in history alongside John Harvard, Elihu Yale, and Leland Stanford. But the donor needs to act soon because, as Ellis rightly says, “[w]henever an academically serious scholar retires, the replacement will almost certainly be a political radical. However bad things are now, they will be worse next year, and even worse the year after that” (p. 173).

Many leftists assert that an excellent traditional university would be impossible even in theory because it would be “on the wrong side of history,” while leftism is the future. One enlightened donor would be enough to prove themwrong. But if no such donor (or group of donors) comes forward, the leftists may turn out to be right in practice.