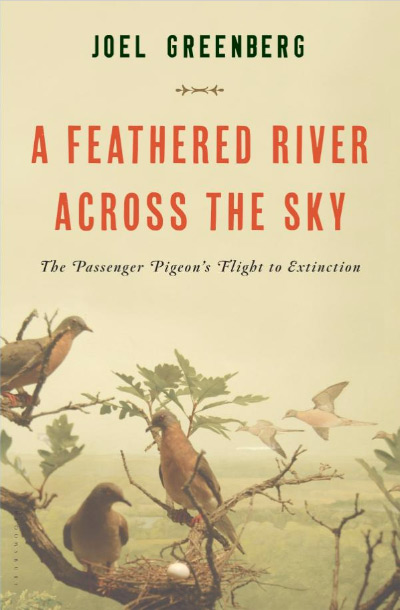 A Feathered River across the Sky
The Passenger Pigeon’s Flight to Extinction
Joel Greenberg
Kindle Hardcover Paperback Audiobook
This book review appeared in the Winter 2014/15 issue of The Independent Review.

Joel Greenberg, research associate at the Field Museum in Chicago, has written an utterly fascinating and thorough account of the forces that drove the passenger pigeon to extinction. His goal is to use the centennial of this event “as a teaching moment to inform people about the passenger pigeon story and then to use that story as a portal into consideration of current issues related to extinction, sustainability, and the relationship between people and nature. It is hoped that this tragic extinction continues to engage people and to act as a cautionary tale so that it is not repeated” (p. xiii).

But what are the lessons to be learned from the passenger pigeon? Was its demise a tragedy? Was it a tragedy of the commons? Are these events likely to be repeated?

The passenger pigeon’s extinction was almost completely unexpected because these birds were not merely common but unbelievably numerous—the most abundant bird species in the world. When European visitors to North America returned with descriptions of the magnitude of passenger pigeon flocks, they were justifiably met with incredulity, and they sometimes kept quiet, suspecting that no one would believe them anyway. Yet credible accounts tell of virtual rivers of migrating birds. One observer, English hunter and naturalist W. Ross King, recounted around 1860 that early in the morning he was awakened to see “the sun obscured by millions of pigeons . . . darting onwards in a straight line . . . in a vast mass a mile or more in breadth, and stretching before and behind as far as the eye could reach. Swiftly and steadily the column passed over with a rushing sound, and for hours continued in undiminished myriads. . . . The duration of this flight being about fourteen hours . . . the column (allowing a probable velocity of sixty miles an hour) could not have been less than three hundred miles in length” (qtd. on p. 5). Experts now estimate that this flock would have contained about 3.7 billion (not a misprint) birds. About half a century later, not a single pigeon was left.

Indeed, the passage of these pigeons could evoke apocalyptic descriptions. When pigeons flew over Columbus, Ohio, in 1855, “children screamed and ran for home. . . . Horses bolted. A few people mumbled frightened words about the approach of the millennium, and several dropped to their knees and prayed. . . . Day was turned to dusk.” After the flock passed over the “ghostly” town, the sunlight “illuminated a world plated with pigeon ejecta” (p. 54). Pigeons, likened to a plague of locusts, could spell doom. They could strip an area bare of crops, and the weight of the roosting horde could destroy the value of a forest. They would eat almost any crop, but especially liked fruit and “mast”—acorns, beechnuts, and other tree nuts. They competed directly with humans—and their swine, which feasted on mast—for these resources. Greenberg aptly titles one section “They Made Great Havoc: Enemies of Agriculture” (p. 74).

Accordingly, most Americans saw these beautiful, even majestic birds as a dreadful pest—but a tasty, nutritious pest that could feed a hungry nation. Pigeons were not a high-priced delicacy; they were inexpensive food for the poor. Although Greenberg notes that the masses of pigeons were viewed “with wonder and hunger” (p. 68), he doesn’t dwell enough on the latter point. It is important to realize how underfed our ancestors were, something we can occasionally come close to measuring. For example, John Komlos found that the average height of eighteen-year-old West Point cadets in the middle of the 1800s was only sixty-seven inches (five foot seven), and their average weight was a scrawny 126 pounds—and these young men probably came from more well-off families (“The Height and Weight of West Point Cadets: Dietary Change in Antebellum America,” Journal of Economic History 47, no. 4 [1987]: 897–927).

So how did our underfed ancestors eradicate this species? Passenger pigeons were unusually easy to catch, and accordingly “people killed them in virtually every way imaginable” (p. 68). Many were shot—although their market value was sometimes so low that one hunter is quoted as saying that guns were preferred only when it seemed certain that a single shot would bag five or more pigeons. “Stool pigeons” were used as decoys to attract them, as were other forms of bait, but people more commonly trekked into the pigeons’ nesting grounds—which could cover hundreds of square miles—and captured them in nets, clubbed them, or simply wrung the necks of unlucky squabs who hadn’t yet learned to fly or mature birds dislodged from trees during nighttime raids. Such hunts became impressive affairs, with word of the pigeons’ arrival spreading by telegraph and thousands of families converging. These hunts often had the atmosphere and “drunken gaiety” (p. 94) of a picnic or a fair, and on occasion special trains were dispatched to accommodate the influx. Catching pigeons could be very remunerative, but it was brutal, messy work. After the hunt, the birds were processed and eaten locally or shipped by rail to markets throughout the country. (Oddly, Greenberg’s delightful appendix, which covers a surprising array of miscellany about the pigeons—including passenger pigeons in music, novels, poetry, paintings and sculpture, movies, radio, TV, and theater—includes not a single recipe.)

The eradication of pests is usually considered a public good—something that benefits everyone, even those who don’t pay for the service—which sometimes leads governments to subsidize the activity. For example, until recent memory the eradication of predators such as wolves was considered a good thing, with payments offered for dead wolves. In 1850, Utah spent 15 percent of its territorial budget on wolf bounties (“Call of the Wild,” The Economist, December 22, 2012). Pigeons were widely viewed as pests, but this alone cannot explain their extermination—after all, eliminating other pests such as Yersinia pestis (the cause of plague), malaria-carrying mosquitoes, and rats hasn’t been as successful. Unlike most species, however, the passenger pigeon apparently had an Achilles heel. Before pigeon hunters gained access to modern transportation networks, the pigeon’s ecology of traveling and nesting in gigantic multitudes was probably a strength rather than a weakness. Nut production was very variable from year to year and location to location, but when mast was available, pigeons could descend on the region, and their very numerousness meant that local predators could make barely a dent in their population, including defenseless young squabs, which parents left to their own devices before they could fly. This strength was undone in the 1800s when human predation became more systematic, and as flocks dwindled, they seem to have fallen below a “threshold” needed to sustain this strategy. “The decline itself likely fostered increased mortality, making individual birds more vulnerable to predators” (p. 195). Ironically, it appears that the passenger pigeons’ economies of scale in foraging and nesting led to economies of scale in hunting them. In addition, isolated refuges eventually disappeared as once-inaccessible swamps were drained, with federal and state governments’ blessing and encouragement.

The tragedy of the commons occurs when lack of property rights leads to the unsustainable overuse of a resource, such as fish in the open sea or, perhaps, the passenger pigeon. But it is not clear that the pigeon’s extinction was an instance of this kind of tragedy. P. J. Hill’s recent analysis of the bison argues that the valuable resource on the plains wasn’t the buffalo, but rather the grass they ate. Hunting the bison cleared the land for cattle, which were much more efficient in converting grass into marketable meat (“Are All Commons Tragedies? The Case of Bison in the Nineteenth Century,” The Independent Review 18, no. 4 [Spring 2014]: 485–502). Likewise, it is not clear that the passenger pigeon was the valuable resource farther east; rather, it was the land on which the food they ate grew. Farmers were becoming more and more efficient in turning this land into marketable calories, protein, and nutrients, and the passenger pigeon was getting in the way. Attempts at domesticating the passenger pigeon failed, but farmers constantly improved chicken breeds, successfully turning grain into a reliable, low-cost source of eggs and meat.

For good or for ill, the displacement of the passenger pigeon reflects the broader agricultural history of humankind—taking control of nature, driving out wild species, and replacing them with domesticated animals that are more cooperative at growing fat and being eaten. See, for example, Randall Munroe’s visualization, based mainly on research by Vaclav Smil, of the global tonnage of land mammals (“Earth’s Land Mammals by Weight,” xkcd). It shows that the entire mass of wild mammals such as elephants, bison, and other wild animals is dwarfed by that of domestic mammals such as goats, pigs, and sheep. Domesticated cattle collectively outweigh wild mammals by an immense amount. But historically humans modified natural habitats even before they began domesticating animals. For example, when New World species proved difficult to domesticate, Native Americans adopted another strategy—burning vast forests to turn them into grasslands where large game could be hunted. Before the arrival of Europeans, bison ranges covered most of the part of North America that would become the United States east of the Mississippi. As Greenberg puts it, “From the perspective of most plants and animals, humans”—modern and premodern—“make terrible neighbors” (p. 202).

How likely is a repeat of something similar to the passenger pigeon episode? Most modern extinctions have not been caused by an orgy of hunting; rather, they have occurred to isolated populations, especially on islands, when other species invade (e.g., pigs and crab-eating macaques raiding Dodo bird nests) or habitat is lost. I may be wrong, but it seems unlikely to me that there will be other unwelcome but widely eaten species that will be pursued as relentlessly as the passenger pigeon—we have simply gotten much better at producing food cheaply without the need for the kind of grubby predation practiced by the pigeon’s pursuers. Instead, as we have continued to commandeer more of nature’s resources, we have gotten better at leaving room for our favorite species to flourish (including some we used to dread, such as wolves) simply because we sympathize with them and now have this luxury.

In a final twist, there are now plans for bringing back the passenger pigeon—reviving this extinct species using modern genomic breakthroughs. The logistics of this rebirth have been discussed in TED Talks, at the Smithsonian, and in academic conferences. (See the Long Now Foundation’s website, which outlines “the great passenger pigeon comeback.”) But Greenberg, rather than ending on this optimistic note (which he discusses in less than a page in an appendix), almost obsessively counts down the deaths of the last few pigeons in his final few chapters, with an undercurrent implying that every passenger pigeon hunter deserves some blame in their extinction.