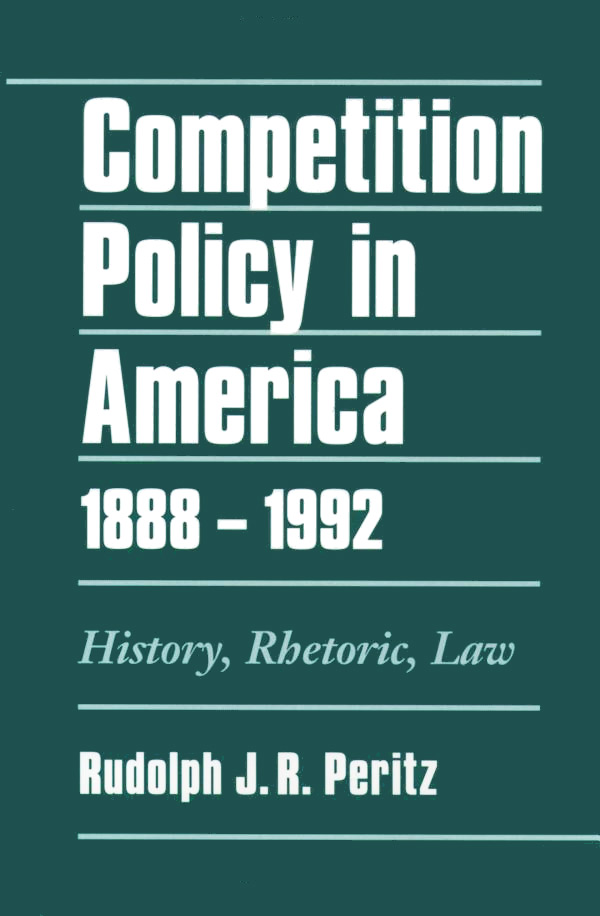 Economics is not mentioned in the title of this book about the history of American competition policy. Score one for truth in advertising. From time to time Rudolph Peritz, a professor at the New York Law School, mentions some economic theory or doctrine. But Peritz is to economics what Al Gore is to environmental science: an immense chasm separates what the man thinks he knows from what he actually knows.

Any B student in an introductory microeconomics class could tell Peritz that a worker possessing only the most modest wealth has quite a lot of bargaining power if two or more employers are interested in acquiring that worker’s services. If Kmart offers Homer Simpson only $9 per hour while Sears stands ready to pay him $10 per hour for the same kind of effort, no firm has undue bargaining power over Simpson. Indeed, it is only because several massive conglomerations of assets exist that Simpson enjoys as much bargaining power as he does. Bargaining power comes from options, and options come from workers’ freedom to choose where to work, employers’ freedom to choose whom to hire and fire, and firms’ freedom to use their properties in any peaceful way they believe will maximize asset values.

Any A student in the same economics class could scold Peritz for asserting that free markets exist only when bargaining power is equal. If Simpson had, by some measure, less bargaining power than large firms, this condition would be unfortunate for Simpson. However, this inequality by itself would not mean that the market is not free. Free markets exist whenever some minimum respect for private property rights prevails and government does not interfere with the peaceful use and voluntary exchange of these rights. As long as humans exist, each will have ample opportunity for mutually advantageous exchanges with others. Bargaining power determines only the distribution of the resulting gains from trade. Nothing in either the theory or the practice of free markets requires that the gains from trade always, or even generally, be divided equally.

Although Peritz’s book is not one to read for economic enlightenment, its subtitle does accurately promise to convey some history. Specifically, the book is a legal history of competition law and policy in the United States since 1888. But it is a peculiar history. It is a history only of lawyerly words. Peritz has combed impressive amounts of legal materials–legislative histories, committee reports, statutes, case briefs, and court opinions. He serves them up here. But this meal is the potato without the steak. The more important history–or, at least, a necessary complement to Peritz’s history of lawyerly words–is the history of what the lawyers were referring to.

The lawyers spoke of the economy, of “trusts,” of J. D. Rockefeller and Standard Oil, of Gustavus Swift and the Chicago meatpackers, of unfair competition and predatory pricing, and of mergers, monopolies, and price fixing. Peritz, though, never checks the lawyerly rhetoric against real-world facts. For him, sufficient proof that private monopolies were a constant threat to consumers and workers is furnished by the fact that politicians, bureaucrats, and judges spoke as though monopolies were such a threat.

Consequently, having acquired all his knowledge of economic history from reading congressional debates and court opinions, Peritz knows virtually no economic history. Examples abound. Peritz repeats the popular myth that Standard Oil practiced predatory pricing. In fact, economic historians have known for 40 years–since the 1958 publication of John McGee’s famous paper on Standard Oil–that Rockefeller’s company did not practice predatory pricing. Peritz also writes that the “trusts” of the late nineteenth century “unjustly enriched a select few at the expense of the commonwealth” (p. 11). In fact, real wages rose during this era as output grew impressively. Furthermore, as Thomas DiLorenzo has shown, in the 1880s in the industries singled out in congressional debates as being monopolized, outputs increased faster than aggregate output in the booming economy. Likewise, real prices charged by firms in these allegedly monopolized industries fell. None of these facts are reconcilable with what Peritz thinks he knows about the economy. And Peritz’s knowledge of more recent economic history is equally skimpy.

Not only is Peritz wholly misinformed about actual economic history, but even his history of legal rhetoric is marred by embarrassing mistakes. For example, he mentions “the influential 1968 Neal Report” as having been “commissioned by the Carter Administration” (p. 233). And he consistently gives wrong years for famous Supreme Court decisions–1904 rather than 1905 for Lochner v. New York; 1910 rather than 1911 for Dr. Miles Medical Co. v. John D. Park & Sons; 1972 rather than 1973 for Roe v. Wade. Such mistakes do not instill in the reader confidence in the author’s research skills.

The book’s gravest flaw, however, is its unquestioned acceptance of the statist sophistry that order among humans can be created only by coercion or the threat of coercion. According to practitioners of this sophistry, all seemingly voluntary interpersonal acts in an orderly society rest ultimately upon government sanction. Thus, there is no such thing as truly voluntary interpersonal relationships. “Freedom of contract,” for example, is a classical-liberal myth perpetuated by liberals’ naive refusal to understand that coercion is the necessary basis of all human order. Note how Peritz justifies the assertion that all contracts involve coercion:

The difficulty lay in the very relationship between coercion and freedom of contract. That was the point made so forcefully in the writings of political economist Robert Hale: In a fundamental sense, we only enter into contracts when we cannot freely take what we want. We cannot take what we want when it belongs to someone else. That is, we do not take it under threat of coercion, of government sanction to defend private property. This understanding of contract as fundamentally coercive also raised serious questions about the very logic of laissez-faire constitutionalism underlying the Lochner era: How can freedom of contract be understood as a purely private institution to be protected from government “intrusion” when government action (or the threat of it) lies at the very heart of property rights and contractual relations? (p. 85; my emphasis)

If it were true that “government action (or the threat of it) lies at the very heart of property rights and contractual relations,” then there would be some potency to the statist case along the following lines: Given that coercion is necessary for social order, laissez-faire advocates had best abandon their quaint habit of championing “voluntary cooperation” over “government coercion,” for there is no such thing as voluntary cooperation independent of government coercion. Our only choice, therefore, is between coercion used for good ends and coercion used for bad ends.

But it emphatically is untrue that government coercion is prerequisite to social order. Those who argue that government coercion is indispensable commit the same intellectual error as those who argue that a conscious mind is necessary for the creation of biological order. Not comprehending how a large, complex order arises from the feedback-controlled local actions of individual components of the order, statists, like creationists, cannot help but posit an all-powerful conscious planner as their explanation for the observed order. It is a tiny step from the assumed existence of such a powerful conscious ordering force to the conclusion that nothing happens without at least the implicit consent of this powerful force.

Theory and history, however, combine to show that social order–including law–is largely the unplanned product of scores of individual actions undertaken in a rich network of feedback loops. Economists’ greatest achievement is the demonstration that orderly, prosperity-producing economic relationships evolve out of more narrowly focused, cooperative individual actions. Adam Smith made this point when he spoke of the invisible hand. Less well known is the demonstration by some legal scholars that law itself is no less an undesigned, unintended result of voluntary actions among individuals, none of whom intend to create law.

The purest example of “spontaneous law”–law based not upon sovereign coercion but, instead, upon voluntary actions–is the law merchant. This body of commercial law began to take shape 1,000 years ago as European merchants increasingly traded with people in distant places. Disputes inevitably arose among the merchants. To settle the disputes, merchants established courts manned by merchants. No merchant court could enforce its findings with the threat of coercion. If a losing defendant in a merchant-law case refused to pay the judgment awarded to the plaintiff, the defendant did not have to worry that the sheriff or some other agent of the sovereign would forcibly extract the judgment from him. Instead, a man who refused to abide by the judgment of the court suffered a loss of that most valuable of all assets, his reputation. Having broken the law and refused to make proper amends, this merchant became an ex-merchant, as no one would deal with him any longer on favorable terms.

I mention the law merchant only to prove that law does not require the backing of coercion supplied by government. Once this point is proven, the intellectual keystone supporting Peritz’s book disappears. The book then crumbles, along with the author’s conclusion that economic opportunity requires active state policing of markets.

Sometimes a book with faulty premises, illogical arguments, and mistaken conclusions proves useful if it reports a sufficiently large number of interesting facts. This book does not. Though it is loaded with numerous accounts of congressional testimony, courtroom argument, and other verbiage spilled by those who helped to form government “competition policy,” these accounts are so poorly edited, as well as filtered through such a confused view of economic reality, as to be useless. I can think of no good reason to recommend reading this book.