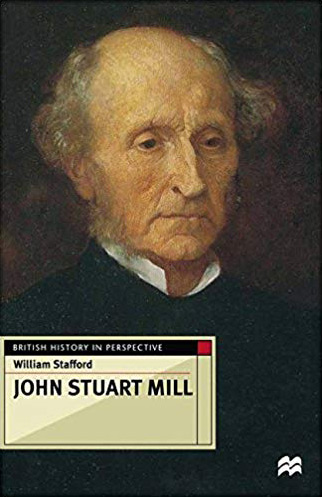 William Stafford’s recent book is the best short introduction to the thought of John Stuart Mill I have come across. The first chapter is devoted to a brief discussion of Mill’s life and his reputation, the latter part constituting a good overview of the history of Mill scholarship. The second chapter discusses Mill’s own narrative of his life, a task required by the fact that one of Mill’s most important publications, and perhaps one of the most important books of the nineteenth century, is his Autobiography. The third chapter reviews Mill’s Logic and Principles of Political Economy, works that earned him fame during his lifetime and that achieved canonical status as textbooks during the latter part of the nineteenth century. The fourth chapter focuses on Mill’s other major and influential publications, Utilitarianism and On Liberty. The fifth chapter deals with Mill’s life as a political journalist, politician, and political activist with regard to such issues as imperialism, Ireland, Jamaica (Governor Eyre), democracy, socialism, and feminism.

For readers of The Independent Review, the most interesting part of the book will be the discussion of socialism (pp. 122–30). Most readers of Mill’s Autobiography will remember that Mill declared himself to be a socialist, a declaration that has both mystified them and largely colored later reactions to or interpretations of Mill. What most readers do not take the time to do, as Stafford highlights, is to ask what socialism meant at the time and for Mill himself. Mill was a utopian socialist, critical in particular of the morally debilitating class structure of the economic world in Britain in the nineteenth century. What he opposed was the idea of a permanent divide between employers and employees. As a utilitarian, Mill did not believe in the natural right to property. He favored a mild degree of state intervention, in the form of free and compulsory public education, among other things. Finally, he found unearned and unmerited advantage repugnant. Stafford recognizes that Mill opposed central planning, opposed violence, advocated compensation for “takings,” opposed many aspects of trade unionism, was not “a state socialist of the Fabian or any other kind” (p. 123), saw competition as an absolutely necessary and good thing, and took the advancement of liberty as the criterion against which he measured all economic proposals.

So far, so good. But the discussion becomes muddied. Stafford’s understanding of Mill’s economics derives largely (judging by the bibliography) from a reading of Hollander’s massive treatise and a recent book by Kurer. “The most powerful attempt to play down Mill’s socialist credentials is Hollander’s two-volume study of his economics; the opposite case has been well argued by Kurer” (p. 18). In the background is Hollander’s thesis that Ricardo did not draw political conclusions from pure theory, and neither did Mill. Stafford supports the Schumpeter view that Ricardo was guilty as charged, but Mill was not.

This interpretation raises the larger question of how Mill understood his own policy positions. To answer that question, several points must be kept in mind. (1) Mill was writing a century and a half ago about an emerging industrial society. (2) Britain’s economy did not then resemble the modern world of finance capitalism, but was instead a system in which wealth was concentrated in the hands of landed aristocrats who still conceptualized and acted in feudal terms in the economic world. (3) Like Ricardo, Mill understood those landed aristocrats as obstacles to the full development of a free-market economy, and, like Ricardo, he tailored some of his policy recommendations (such as opposition to primogeniture and to entailed estates) to a specific context, aiming at enhancing the free market (so perhaps Hollander is right after all; there is support for this view, by the way, in Mill’s autobiographical account of Ricardo). (4) Mill repeatedly claims that he is not wedded to any specific policy proposal, that all his proposals are subject to being trumped by efficiency considerations or supertrumped by liberty considerations. (5) All of Mill’s policy recommendations were aimed at closing the distinction between employers and employees, but it is most important that the gap be closed by creating a world in which all people are owner-employees, not by setting up a system of state or common ownership; hence, he favored producer and consumer cooperatives that were self-funded, and his advocacy of state purchase of private land for redistribution in Ireland was aimed at ending the feudal holdover of tenant farming in favor of widespread private ownership. (6) In short, Mill favored a utopian socialism aimed at making all workers into bourgeois self-employed entrepreneurial and autonomous individuals! This aspect is precisely what Marx and Engels objected to in utopian socialism (see Engels’s letter on why The Communist Manifesto was not titled The Socialist Manifesto).

Stafford refers to the unfinished publication of Mill’s Chapters on Socialism and claims that its unfinished character does not permit the inference that Mill changed his mind about socialism and became one of its critics. What is strange about this claim is Mill’s insistence that socialism as it was developing in the workers’ movements of the late nineteenth century was becoming a threat to liberty. If Mill was a utopian socialist for whom liberty trumps everything, then he did not change his theoretical position but rather amended its expression to reflect contemporary events. He advocated a society of autonomous and entrepreneurial individuals, a middle-class society; he sought to head off—failing through no fault of his own—a British society without real entrepreneurial leadership and permanently divided between a feudal Tory party and a statist-bent Labour Party. Keith Joseph, who served in Margaret Thatcher’s cabinet, has called attention to that continuing problem in Britain.

The best contemporary example of the kind of economy that Mill favored is reflected in the small start-up company in Silicon Valley in which all the individuals involved are part owners in the enterprise. It is difficult to see why any modern reader would want to identify this setup as socialism. What Stafford seems to have in mind is that (a) Mill was a critic of crass materialism and of what Nietzsche came to call the mentality of the last man—focused only on creature comforts; (b) he opposed feudal hierarchical societies with their debilitating moral effects; (c) he objected to defenses of private property that were based on dubious appeals to abstract principles such as “natural rights” and that were intended to maintain a feudal society; (d) he favored producers’ cooperatives; (e) he denied that Homo economicus truly represented basic human motivation; (f) he worried about the social and political consequences of a no-growth economy (the “stationary state”—he did not hold to our comforting contemporary thought that growth is infinite or even always desirable); and (g) he recognized the need to promote the ideal of individual autonomy among the working classes, most of whom were just emerging from feudal dependence.

The last point deserves to be stressed. Libertarians, classical liberals, and modern liberals all share a common false assumption—namely, the views that human beings are fundamentally good and autonomous, and that the larger social environment induces sociopathic behavior. Adherents of those three ideologies differ only in their favorite notion of what environmental factor is the most oppressive (say, government regulation or poverty). All three movements assert that when the external force is removed, individuals will automatically bloom. Mill would disagree with all three positions. He believed that autonomous action was learned behavior, an achievement, and that what people needed (especially in the newly emerging industrial economy of Britain in the nineteenth century) were supportive institutions that promoted such autonomy. That is why his policy recommendations confound so many readers. He does advocate public and governmental action to promote autonomy, and at the same time he warns about the wrong kinds of intervention, the kinds that promote dependence and inculcate the rhetoric of victimization. This problem still has not been adequately dealt with either domestically or in those parts of the world that strive to come to terms with a global market. Libertarians as much as modern liberals are still hiding their heads in the sands of ideology.

Stafford calls attention to the posthumously published Chapters on Socialism, in which Mill offers his most decisive objections and warnings about the threat to liberty posed by late-nineteenth-century socialism. Stafford points out that the work was never finished and therefore provides no clear indication of Mill’s later views. However, we do know a great deal about those later views on socialism. According to L. S. Feuer, “Mill’s last chapters on socialism must be regarded as essentially an evaluation founded on the added experience of the English trade unionists with the International... The too generous hopes of Mill in 1848 for the principle of association were now basically amended in the light of this new phenomenon of the revolutionary ideologists—this permeation of socialism with a ferocity and hatred which Mill had not previously foreseen” (“John Stuart Mill as a Sociologist: The Unwritten Ethology,” in James and John Stuart Mill: Papers of the Centenary Conference, edited by John M. Robson and Michael Laine [Toronto: University of Toronto Press, 1976], p. 107).

The revolutions on the continent in 1848 made it all the more imperative in Mill’s and Harriet’s minds that Britain respond to the serious problems of the industrial revolution. Mill never changed his mind on the potential threat to liberty (see the letter of February 21, 1849, in Collected Works [Toronto: University of Toronto Press, 1972], vol. 14, p. 11). He always remained concerned about whether most people could operate with higher motives, concerns he repeated in Chapters on Socialism. We would have to conclude with Hollander that there are no substantive modifications in the Principles of Political Economy between 1849 and 1852 (Samuel Hollander, The Economics of John Stuart Mill [Toronto: University of Toronto Press, 1985], vol. 2, p. 791). Lord Robbins is right in calling this steadfastness “a plea for an open mind” (Lionel Robbins, Theory of Economic Policy in English Classical Political Economy [London: Macmillan, 1952], p.167). Against the interpretation that John Stuart Mill moved gradually from nonintervention to intervention, Pedro Schwartz maintains that Mill “started with an inclination in favor of State interference, let it wax stronger under Continental influence, then in the forties reacted against interventionism, helped by his contacts with de Tocqueville; and finally, by ‘incessantly weaving anew the fabric of his old and taught opinions’ was able to combine the claims of an active State with those of liberty into a single edifice of thought” (The New Political Economy of J. S. Mill [Durham, N.C.: Duke University Press, 1972], p. 106).