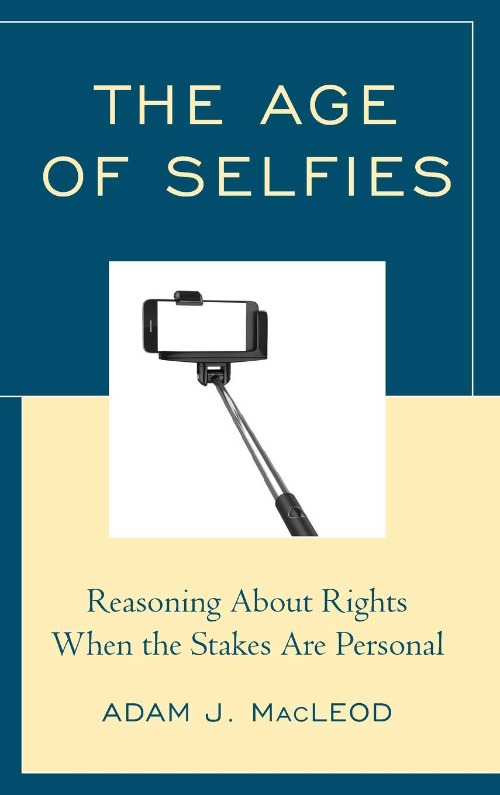 The Age of Selfies
Reasoning about Rights When the Stakes Are Personal
Adam J. MacLeod
Kindle Hardcover Paperback
This book review is a web exclusive for the Spring 2021 issue of The Independent Review.

Americans recognize that we are growing further apart, and social scientists confirm the unfortunate trends of increasing political polarization, declining trust in society and institutions, and an increasingly rude and crude public discourse. Adam MacLeod offers us a clearly written and compact account of how to reason about our rights under these conditions, especially when politics has become part of our identities. The problem, as MacLeod puts it, is that our disagreements are often about morality, and that raises the stakes. For, after all, how can we compromise with others about right and wrong? Bargaining over tax rates, or schooling policy is one thing, but bargaining over basic justice and injustice seems to capitulate to evil.

MacLeod recognizes that our disagreements aren’t going anywhere, so he proposes to help us understand how to have healthy disagreements. Given his mission, it is perhaps rather surprising that MacLeod blames the ideal of political neutrality and a “neutral” public square for many of our social ills. Some form of neutrality (which MacLeod never clearly defines, despite the large literature on the topic) might seem to be a promising way to govern the public square. We limit ourselves to sharing reasons and rationales that do not depend on the truth or falsity of any particular religion or ideology. That’s how we have civil discourse: we focus on shared values.

But MacLeod thinks the vacuum of a neutral public square has prevented us from appealing to more substantive commitments that could make our conflicts more manageable. His alternative is to refocus our efforts from having abstract debates about rights and principles to asking and answering the “Practical Question”: “What should I do?” When we consider the first-personal perspective, we will see that we are under certain duties to others and that we should assert rights claims to help us live integrated, just, and virtuous lives, rather than simply disputing the nature of ultimate morality unmoored from how we personally ought to live. From the first-personal point of view, we will also be able to see the way in which our own actions contribute to the problems of division and incivility. From that perspective, then, we can lower the stakes of moral disagreement that allows us to honor the rights of others and build a principled, plural order. We can also avoid one size fits all solutions to social problems, instead allowing the common good to flourish in all its diverse aspects. These practices include recognizing our sinfulness and practicing forgiveness.

While I appreciate MacLeod’s efforts to crisply address divisive conflicts within American society, I think there is a fundamental tension between the book’s stated aim and its argumentative strategy. The stated aim of the book is to help reconcile people with diverse moral, religious, and political perspectives. But its argumentative strategy is to advocate solutions characteristic of the American conservative tradition, despite the fact that American conservative ideas are among the matters that we so bitterly contest. It is a bit like proposing to resolve a marital disagreement by declaring that the father is in the right and the mother in the wrong.

Examples abound: MacLeod decries a focus on political neutrality. He says that the age of neutrality is over, and that people should simply propose what they think is best, which is bound to be off-putting to his liberal neutralitarian readers (we still exist, doggone it!).

I do not see why simply stating what one thinks is best violates any interesting conception of neutrality. Instead, we are given a more cacophonous conception about how people can engage in contestation in the public square. Neutrality isn’t fundamentally about public discourse anyway: it is about the structure of legal institutions and whether they should take sides on matters where the issues at stake are reasonably contestable. Liberal neutralists want a legal and constitutional order that is fair, and that means being fair not merely to people with different faiths, but to people with different political outlooks. That might be achieved by trying to clear the public square of sectarian values, or it might be achieved by allowing the public square to be suffused with sectarian discussions.

Yet with all that said, MacLeod still sets neutrality aside, and advocates advancing robust conceptions of the good instead, a refrain from conservative critics of liberalism.

MacLeod’s focus on the Practical Question draws a reason-feelings distinction that adopts a right-wing framing of the proper relationship between reason and emotion in politics. Many on the left stress respecting feelings not because they think only feelings matter, but because they’re attempting to validate the pain of persons who have suffered from marginalization and oppression. Encouraging people to express their pain is meant to help them heal, to make others aware of their plight, and motivate people to help end injustice. Perhaps there is nothing more to the stress on respecting feelings than a moral principle of respect for the weak, which one can characterize as a knowable, true moral principle.

MacLeod also discusses how we can deflate rights-discourse by focusing on our duties; the false rights claims will become clear when we ask who pays the price for the right, because all rights involve impositions on others when they are enforced. Worries about overly inflated rights-discourse are another hallmark of the right. In many cases, indeed, some rights claims are false claims. But the inflation of rights proposed by the left is based on the sense that the rights claims we presently acknowledge are too meager to respect the dignity and equality of all. I am also unsure how focusing on duty will improve our moral discourse because left-leaning persons see themselves as under extremely strong personal duties to fight for social justice, an idea that the right frequently rejects or even treats as incoherent.

Next MacLeod echoes the standard conservative insistence that there is a mind-independent moral truth, which he says we can reach by answering the Practical Question. One gets the sense that the author still thinks that the left is postmodernist, when in fact the young left thinks they have a perfectly clear grasp on moral reality (even if they cannot explain the source of moral reality or our ability to know it). Moral reality is best described by a principle of equality: what we owe to others is to treat them as equals. So, there are increasingly few people on the left who find the stress on moral truth even challenging. Indeed, Anglophone philosophers are keen to distinguish the metaethical question about the nature of moral truths from the normative ethical question about what moral truths there are. One can mix and match views: be a realist progressive, or a constructivist conservative.

MacLeod also appeals to natural law as the basis of moral truth, and connects natural law and natural rights (which, historically, natural law theorists sometimes worry about). But this is yet another conservative idea, which may very well be true, but is yet again dressed up as a way of resolving our disputes when it is yet another thing we disagree about. Many on the left are Kantians, holding up autonomy as the basis of morality, and who see morality as objective, yet human-focused. A Kantian moral view—which sometimes takes the form of moral realism—does not tie morality to what is natural. Indeed, the natural is normatively inert on this view. For this reason, many on the left do not tie morality to what is natural and see many claims about what is natural as a dog-whistle for oppression and social control. We don’t agree about the relationship between nature and morality. And it is hard to derive moral principles from natural facts. So, to appeal to natural law to resolve our disputes is simply to presuppose what is in question.

As the book progresses, the solutions MacLeod offers become more and more sectarian, such as a focus on the recognition of sin and the duties of forgiveness. And he starts to appeal to the language of ordered liberty, the sometimes great good of discrimination, and a robust conception of the common good.

In essence, what the book delivers is a conservative worldview wrapped in an open-society-liberal package. MacLeod takes familiar conservative ideas and tries to show how they can help us to resolve our divisions and difficulties. Maybe MacLeod is right about this, but it isn’t going to help with his overall aim because his informed, left-leaning readers will simply think that he’s asserting that his side of our conflict is correct, rather than trying to stand above the conflict and offer principles that can bring both sides together. No left-leaning reader of this book is going to be any more reconciled to conservatives after reading a nice, clear statement of conservative principles and ideals. They will only see a direct debate between conservatism and progressivism.

Lest any reader think I am a man of the left, I should point out that I agree with just about everything MacLeod says about truth, practical rationality, sin, and forgiveness. And indeed, I agree that a society that recognizes natural law and natural rights will be a very good one, and one I would be overjoyed to live in. But I say this to stress that The Age of Selfies is not a book that helps us reconcile with those of opposing moral perspectives. It is just an extended argument that a conservative perspective can embrace the principles of open societies.

If the book had simply been billed this way, then I think it would be a success. There are indeed interesting questions surrounding the extent to which contemporary American conservatism can be friendly to traditional liberal values of free speech and civil discourse. And MacLeod provides an attractive, principled proposal for synthesizing American conservatism with the principles of the open society. But informed left-leaning readers will be left without much help in figuring out how to adopt the principles of the open society MacLeod is keen to defend.